The Common Foreign and Security Policy (CFSP) is the organised, agreed foreign policy of the European Union (EU) for mainly security and defence diplomacy and actions. CFSP deals only with a specific part of the EU's external relations, which domains include mainly Trade and Commercial Policy and other areas such as funding to third countries, etc. Decisions require unanimity among member states in the Council of the European Union, but once agreed, certain aspects can be further decided by qualified majority voting. Foreign policy is chaired and represented by the EU's High Representative.

The CFSP sees the NATO responsible for the territorial defence of Europe and "peace-making". However, since 1999, the European Union is responsible for implementing missions, such as "peace-keeping" and policing of treaties, etc. A phrase that is often used to describe the relationship between the EU forces and NATO is "separable, but not separate":[1] The same forces and capabilities form the basis of both EU and NATO efforts, but portions can be allocated to the European Union if necessary. Concerning missions, the right of first refusal exists: the EU may only act if NATO first decides not to.

Co-operation in international trade negotiations, under the Common Commercial Policy, dates back to the establishment of the Community in 1957.[2] The CFSP itself has its origins in the formation of European Political Co-operation (EPC) in 1970.[3] European Political Co-operation was an informal consultation process between member states on foreign policy matters, with the aim of creating a common approach to foreign policy issues and promoting both the EU's own interests and those of the international community as a whole. This includes promoting international co-operation, respect for human rights, democracy, and the rule of law.[4]

The weaknesses evident in EPC—apparent for example during the Yugoslav wars—led to a desire to strengthen foreign policy. This was consolidated in the Maastricht Treaty, which entered into force in 1993 and established the European Union. While the previously existing supranational European Economic Community became one of three pillars, two more pillars were erected. The second CFSP-pillar was based on intergovernmentalism, meaning unanimity between members in the Council of Ministers and little influence by the other institutions.

The Amsterdam Treaty created the office of the High Representative for the Common Foreign and Security Policy (held by Javier Solana until 1 December 2009) to co-ordinate and represent the EU's foreign policy.[5]

The European Council defines the principles and general guidelines for the CFSP as well as common strategies to be implemented by the EU. On the basis of those guidelines the Council of Ministers adopts joint actions or common positions. Joint actions address specific situations where operation action by the EU is considered necessary and lay down the objectives, scope and means to be made available to the EU. They commit the member states. Common positions on the other hand, define the approach that the EU takes on a certain matter of geographical or thematic nature, and define in the abstract the general guidelines to which the national policies of Member states must conform. 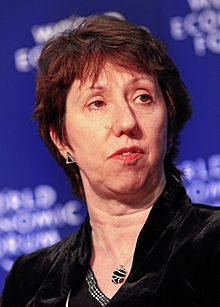 The High Representative, Catherine Ashton, is the EU's spokesperson on foreign policy.

The High Representative, in conjunction with the President of the European Council, speaks on behalf of the EU in agreed foreign policy matters and can have the task of articulating ambiguous policy positions created by disagreements among member states. The Common Foreign and Security Policy requires unanimity among the now 27 member states on the appropriate policy to follow on any particular policy. Disagreements in CFSP, such as those that occurred over the war in Iraq,[6] are not uncommon.

There are a number of bodies set up within the context of the CFSP. Within the Council, there is the Foreign Affairs Council (FAC) configuration, essentially a meeting of foreign ministers and the Political and Security Committee or PSC, which monitors the international situation in the areas covered by the CFSP and contributes by delivering opinions to the Council of Ministers, either at its request or its own initiative, and also monitors the implementation of agreed policies.

The European Defence Agency (EDA) encourages increase in defence capabilities, military research and the establishment of a European internal market for military technology. Two bodies carried over from the Western European Union (see defence, below) are the European Union Institute for Security Studies (EUISS) and the European Union Satellite Centre (EUSC). The EUISS is the European Union's in-house think tank. It's mission is to find a common security culture for the EU, to help develop and project the CFSP, and to enrich Europe’s strategic debate. The EUSC is providing analysis of satellite imagery and collateral data.

Main articles: Common Security and Defence Policy and Military of the European Union

Since the Cologne European Council in 1999, the Common Security and Defence Policy (or CSDP) has become a significant part of the CFSP. The EU itself has limited military capability, member states are responsible for their own territorial defence and a majority of EU members are also members of NATO, which is responsible for the defence of Europe.

There was also the Western European Union (WEU), which was a European security organisation related to the EU. In 1992, the WEU's relationship with the EU was defined, when the EU assigned it the "Petersberg tasks" (humanitarian missions such as peacekeeping and crisis management). These tasks were later transferred from the WEU to the EU by the Amsterdam Treaty; they formed part of the new CFSP and the Common Security and Defence Policy. Elements of the WEU were merged into the EU's CFSP and the President of the WEU was also the High Representative.[7][8] In 2010 the merger led to the final dissolution of the WEU, with all its remaining activities to be wound up by 2011.

Following the Kosovo war in 1999, the European Council agreed that "the Union must have the capacity for autonomous action, backed by credible military forces, the means to decide to use them, and the readiness to do so, in order to respond to international crises without prejudice to actions by NATO." To that end, a number of efforts were made to increase the EU's military capability, notably the Helsinki Headline Goal process. After much discussion, the most concrete result was the EU Battlegroups initiative, each of which is planned to be able to deploy about 1500 men quickly.[9] EU forces have been deployed on peacekeeping missions from Africa to the Balkans and the middle east.[10] EU military operations are supported by a number of bodies, including the European Defence Agency, satellite centre and the military staff.[11]

The Political and Security Committee (PSC or "COPS" from its French acronym) first established as an interim body in 2000 is described by the Nice European Council Conclusions as the "linchpin" of the European Security and Defence Policy and the Common Foreign and Security Policy. Its responsibilities include the drafting of opinions for the Foreign Affairs Council, which is one of the configurations of the Council of the European Union, and exercising "political control and strategic direction" of EU crisis-management operations. The committee is a standing body and is composed of national representatives of "senior / ambassadorial level" and meets at least twice a week (Tuesdays and Fridays) in Brussels. It is chaired by the member state that holds the rotating Presidency of the Council of the European Union.

The Commission President has been an unofficial member of the G8 since the 3rd summit in 1977 (Shown: G8 at Heiligendamm, Germany)

Besides its own foreign and security policy, the Commission is also gaining greater representation in international bodies. Representation in international bodies is previously through the European Commissioner for External Relations, who worked alongside the High Representative, but now with the High Representative directly as a Commission Vice President. In the UN the EU has gained influence in areas such as aid due to its large contributions in that field (see below).[12] In the G8, the EU has the rights of membership besides that of chairing/hosting summit meetings. The EU is represented at the G8 by the presidents of the Commission and the Council.[13] In the World Trade Organisation (WTO), where all 27 member states are represented, the EU as a body is represented by Trade Commissioner.[14]

The influence of the EU is also felt through the enlargement. The potential benefits of becoming a member of the EU act as an incentive for both political and economic reform in states wishing to fulfil the EU's accession criteria, and are considered a major factor contributing to the reform and stabilisation of former Communist countries in Eastern Europe.[15] This influence on the internal affairs of other countries is generally referred to as "soft power", as opposed to military "hard power".[16] An example of the support the European Union offers to the reform processes of its neighbours is EUBAM, the European Union Border Assistance Mission to Moldova and Ukraine, which assists the governments of Moldova and Ukraine in approximating their border and customs procedures to EU standards. www.eubam.org

The European Union's influential economic status and its nation-like characteristics has been acknowledged by the United States' Central Intelligence Agency (CIA) in their publication, The World Factbook. The EU was included in the Factbook in December 2004.[17]

The European Community humanitarian aid office, or "ECHO", provides humanitarian aid from the EU to developing countries. In 2006 its budget amounted to 671 million euro, 48% of which went to the ACP countries.[18] Counting the EU's own contributions and those of its member states together, the EU is the largest aid donor in the world.[19]

The EU's aid has previously been criticised by the think-tank Open Europe for being inefficient, mis-targeted and linked to economic objectives.[20] Furthermore, some charities have claimed European governments have inflated the amount they have spent on aid by incorrectly including money spent on debt relief, foreign students, and refugees. Under the de-inflated figures, the EU did not reach its internal aid target in 2006[21] and the EU would not reach the international target of 0.7% of GNP until 2015. However only a few countries have reached that target. In 2005 EU aid was 0.34% of the GNP, which was higher than that of the United States and Japan.[22] The ex commissioner for aid, Louis Michel, has called for aid to be delivered more rapidly, to greater effect, and on humanitarian principles.[19]

Although the Irish people were reassured of their neutrality before agreeing to the Nice Treaty, the Finnish Prime Minister, Matti Vanhanen, on 5 July 2006, while speaking to the European Parliament as Council President declared:[23]

Nevertheless, a similar guarantee on neutrality in relation to the Treaty of Lisbon was granted to Ireland at the European Council of 18/19 June 2009:

The European Council also agreed that other concerns of the Irish people, as presented by the Taoiseach, relating to taxation policy, the right to life, education and the family, and Ireland's traditional policy of military neutrality, would be addressed to the mutual satisfaction of Ireland and the other Member States, by way of the necessary legal guarantees.[24]