The Regional policy of the European Union (EU) is a policy with the stated aim of improving the economic well-being of regions in the EU and also to avoid regional disparities. More than one third of the EU's budget is devoted to this policy, which aims to remove economic, social and territorial disparities across the EU, restructure declining industrial areas and diversify rural areas which have declining agriculture. In doing so, EU regional policy is geared towards making regions more competitive, fostering economic growth and creating new jobs. The policy also has a role to play in wider challenges for the future, including climate change, energy supply and globalisation.

The EU's regional policy covers all European regions, although regions across the EU fall in different categories (so-called objectives), depending mostly on their economic situation. In the current 2007–2013 funding period, EU regional policy consists of three objectives: Convergence, Regional competitiveness and employment, and European territorial cooperation. These replace the previous three objectives from 2000–2006, which were simply known as Objectives 1, 2 and 3. 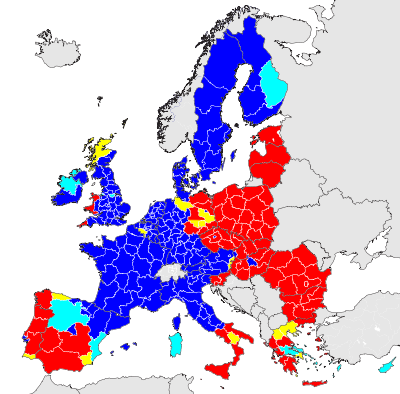 By far the largest amount of regional policy funding (over 80%) is dedicated to the regions falling under the Convergence objective. This objective covers Europe's poorest regions whose per capita gross domestic product (GDP) is less than 75% of the EU average. This includes nearly all the regions of the new member states, most of Southern Italy, East Germany, Greece and Portugal, much of Spain, and some parts of the United Kingdom.

With the addition of the newest member countries in 2004 and 2007, the EU average GDP has fallen. As a result, some regions in the EU's "old" member states, which used to be eligible for funding under the Convergence objective, are now above the 75% threshold. These regions now receive transitional, "phasing out" support until 2013. Regions that used to be covered under the convergence criteria but are now above the 75% threshold even within the EU-15 are receiving "phasing-in" support through the Regional competitiveness and employment objective.[1]

The Convergence objective aims to allow the regions affected to catch up with the EU's more prosperous regions, thereby reducing economic disparity within the European Union. Examples of types of projects funded under this objective include improving basic infrastructure, helping businesses, building or modernising waster and water treatment facilities, and improving access to high-speed Internet connections. Regional policy projects in Convergence regions are supported by three European funds: the European Regional Development Fund (ERDF), the European Social Fund (ESF) and the Cohesion Fund.

This objective covers all European regions that are not covered by the Convergence objective. With 16% of the EU's regional policy budget dedicated to this objective, its main aim is to create jobs by promoting competitiveness and making the regions concerned more attractive to businesses and investors. Possible projects include developing clean transport, supporting research centres, universities, small businesses and start-ups, providing training, and creating jobs. Funding is managed through either the ERDF or the ESF.

This objective aims to reduce the importance of borders within Europe – both between and within countries – by improving regional cooperation. It allows for three different types of cooperation: cross-border, transnational and interregional cooperation. The objective is currently by far the least important in pure financial terms, accounting for only 2.5% of the EU's regional policy budget. It is funded exclusively through the ERDF.