Budget of the European Union

Budget of the European Union

The European Union (EU) is a union of 27 member states. The Administration of the Union has a parliament, a civil service and a judiciary that is distinct from those of the member states. These arms administer the application of treaties, laws and agreements between the member states and their expenditure on common policies throughout the Union. To pay for this, the EU had an agreed budget of €120.7 billion for the year 2007 and €864.3 billion for the period 2007–2013,[1] representing 1.10% and 1.05% of the EU-27's GNI forecast for the respective periods. By comparison, the UK expenditure for 2004 alone was estimated at about €759 billion and France was estimated at about €801 billion.

The Administration of the European Union has three elements to its government: the Council of Ministers, the European Commission and the European Parliament. In addition, the European Court of Justice is funded from the budget of the Administration. All three take a part in setting the annual budget. The budget for a year, or period of years, is determined in advance, but final calculations of payments required from each member state are not completed until after the budget year is over and information about revenue and expenditure is available. The UK rebate is one of the last elements of the budget to be calculated (though it is estimated in advance) as it depends upon the balance of all EU revenue to and from the UK.

The Administration obtains most of its revenue indirectly by payments from treasuries of member states. Revenue is divided into four categories.

Traditional own resources[3] are taxes raised on behalf of the EU as a whole, principally import duties on goods brought into the EU. These are collected by the state where import occurs and passed on to the EU. States are allowed to keep a proportion of the revenue to cover administration (25%). The European Commission operates a system of inspectors to investigate the collection of these taxes in member states and ensure compliance with the rules. The effect of a state failing to collect these taxes is that other states will have to contribute more to the budget, so there is a potential conflict of interest on the part of the collecting authorities. Countries are liable to make good any loss of revenue due to their own administrative failure.[3]

VAT based own resources

VAT based own resources[3] are taxes on EU citizens derived as a proportion of VAT levied in each member country. VAT rates and exemptions vary in different countries, so a formula is used to create the 'harmonised tax base', upon which the EU charge is levied. The starting point for calculations is the total VAT raised in a country. This is then adjusted using a weighted average of VAT rates applying in that country, producing the intermediate tax base. Further adjustments are made where there is a derogation from the VAT directive allowing certain goods to be zero-rated. The tax base is capped, such that it may not be greater than 50% of a country's Gross national income (GNI). The EU applies a call-up rate to the tax base, generally of 0.33%, but this is varied for some countries. For 2007–2013 the rate proposed for Austria is 0.225%, and Germany 0.15%, the Netherlands and Sweden 0.1%. Countries are required to make an account of VAT revenues to the EU before July after the end of the budget year. The EU examines the submission for accuracy, including control visits by officials from the Directorate-General for Budget and Directorate-General for Taxation, and reports back to the country concerned. The country may then respond to any issues raised in the report, and negotiations continue until both sides are satisfied, or the matter may be referred to the European Court of Justice for a final ruling. The Advisory committee on own resources, which has representatives from each member state, also receives and discusses the reports. In 2006, 9 countries were inspected by controllers, including 5 new member states who were participating in the procedure for the first time. It is anticipated that 11 countries will be visited in 2007. The EU may be working on figures for three years at any one time.

GNI based own resources

GNI based own resources[3] currently forms the largest contribution to EU funding. A simple multiplier is applied to the calculated GNI for the country concerned. This is the last recourse for raising funding for a budget year, so the actual figure is adjusted within predetermined limits to obtain the budget total required. Revenue is currently capped at 1.27% of Gross national income in the European Union as a whole. GNI for own resource purposes is calculated by national accountants according to European law governing the sources and methods to compile GNI and the transmission of GNI data and related methodological information to the Commission (Eurostat). Basic information must be provided by the countries concerned to Eurostat before 22 September following the budget year concerned. Eurostat carries out information visits to the National Statistical Institutes forming part of the European Statistical System. Based on assessment reports by Eurostat, the Directorate-General for Budget (DG BUDG) of the Commission may notify to the Permanent Representative of the Member State concerned required corrections and improvements in the form of reservations on the country's GNI data. Payments are made monthly by member states to the commission. Own resources payments are made monthly as they are collected, but monthly installments of VAT and GNI based returns are based upon the budget estimates made for that year, subject to later correction.

Other Revenue[3] makes up approximately 1% of the EU budget. This includes interest on deposits or late payments, payments from non-EU organisations, underspent funding from community programs and any other surplus from the previous budget. 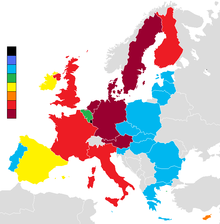 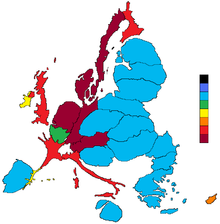 Above data depicted as a cartogram (Luxembourg not shown). 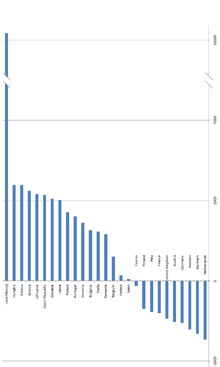 Bar chart showing Open Europe estimate of total budget expenditure in euros for the whole period 2007–2013 per capita (based on Eurostat 2007 population estimates).

A 2007 briefing note[4] by the eurosceptic research and advocacy organization "Open Europe" gave its (contested) estimates for total contributions to the EU and total receipts from it for each member state over the 5 year budget period 2007–2013. Those figures are given in the table below, along with the Eurostat population figures for the beginning of 2007.[5] The calculated net contributions/receipts for each member state are depicted on the diagrams to the right.

The European Court of Auditors is the fifth institution of the European Union (EU). It was established in 1975 in Luxembourg to audit the accounts of EU institutions.

Despite its name, the Court has no judicial functions. It is rather a professional external investigatory audit agency. The primary role of the court is to externally check if the budget of the European Union has been implemented correctly, in that EU funds have been spent legally and with sound management. In doing so, the court checks the paperwork of all persons handling any income or expenditure of the Union and carries out spot checks. The court is bound to report any problems in the Court's reports for the attention of other states and institutions, these reports include its general annual report as well as specific and special reports on certain bodies and issues.[6] The Court's decision is the basis for the European Commission decisions, for example: when the Court found problems in the management of EU funds in the regions of England, the Commission suspended funds to those regions and prepared to fine those who did not come back up to acceptable standards.[7]

In this role the Court has to remain independent yet remain in touch with the other institutions, for example a key role is the presentation of the Court's annual report to the European Parliament. It is based on this report that the Parliament makes its decision on whether or not to sign off the European Commission's handling of the budget for that year. The Court, if satisfied, also sends assurances to the Council and Parliament that the taxpayers money is being properly used and the Court must be consulted before the adoption of any legislation with financial implications but the opinion is never binding.[6] 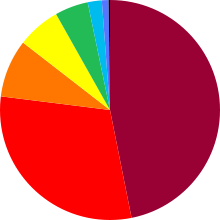 In the 2006 budget, the largest single expenditure item was agriculture (direct aid, export refunds, storage, rural development and other) with around 46.7% of the total budget. Next came structural actions (Objective 1, Objective 2, Objective 3, other structural measures, community initiatives, innovatory measures and technical assistance, other specific structural operations and the cohesion fund) with approximately 30.4% of the total. Internal policies (training, youth, culture, audiovisual, media, information, energy, Euratom nuclear safeguards and environment, consumer protection, internal market, industry and Trans-European networks, research and technological development, other internal policies) took up around 8.5%. Administration accounted for around 6.3%. External actions, the pre-accession strategy, compensations and reserves brought up the rear with approximately 4.9%, 2.1%, 1% and 0.1% respectively.