Member of the European Parliament

Member of the European Parliament
Not to be confused with Parliamentary Assembly of the Council of Europe#Members.

When the European Parliament was first established, MEPs were appointed by member states from members of their own national parliament. Since 1979, however, MEPs have been elected by direct universal suffrage. Each member state establishes their own way of electing their MEPs and in some states the electoral system has changed over time and across regions. All now use one or another form of proportional representation. For a list of the current members see Members of the European Parliament 2009–2014.

From 1 January 2007 (when Romania and Bulgaria joined the EU), there were 785 MEPs, but their number fell back to 736 at the latest elections in 2009, though this will eventually rise to 751, with each member state having at least six and at most 96. Elections occur once every five years, on the basis of universal adult suffrage. There is no uniform voting system for the election of MEPs; rather, each member state is free to choose its own system, subject to three restrictions:

The allocation of seats to each member state is based on the principle of degressive proportionality, so that, while the size of the population of each nation is taken into account, smaller states elect more MEPs than would be strictly justified by their populations alone. As the number of MEPs granted to each member state has arisen from treaty negotiations, there is no precise formula for the apportionment of seats. No change in this configuration can occur without the unanimous consent of all national governments.

The most recent elections to the European Parliament were the European elections of 2009, held in June of that year. They were the largest simultaneous transnational elections ever held anywhere in the world, since nearly 500 million citizens were eligible to vote.

The European Parliament has a high turnover of members compared to some national parliaments. For instance, after the 2004 elections, the majority of elected members had not been members in the prior parliamentary session, though that could largely be put down to the recent enlargement. Only one (Hans-Gert Pöttering) has served continuously since the first elections in 1979.

MEPs within the Parliament 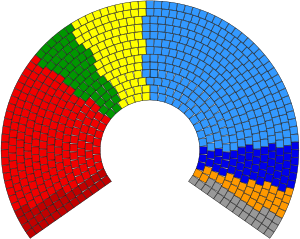 MEPs in Parliament are organised into seven different parliamentary groups, including over thirty non-attached members known as non-inscrits. The two largest groups are the European People's Party (EPP) and the Socialists & Democrats (S&D). These two groups have dominated the Parliament for much of its life, continuously holding between 50 and 70 percent of the seats together. No single group has ever held a majority in Parliament.[2] As a result of being broad alliances of national parties, European groups parties are very decentralised and hence have more in common with parties in federal states like Germany or the United States than unitary states like the majority of the EU states.[3] Although, the European groups, between 2004 and 2009, were actually more cohesive than their US counterparts.[4][5]

Aside from working through their Groups, individual members are also guaranteed a number of individual powers and rights within the Parliament:

The job of an MEP

Every month except August the Parliament meets in Strasbourg for a four-day plenary session, six times a year it meets for two days each in Brussels,[6] where the Parliament's committees, political groups and other organs also mainly meet.[7] The obligation to spend one week a month in Strasbourg was imposed on Parliament by the Member State governments at the Edinburgh summit in 1992.

Also there is the need to keep in touch with constituents in the home state. Most MEPs return to their constituencies on a Thursday evening to spend the Friday and often weekends dealing with individual constituents, local organisations, local and national politicians, businesses, trade unions, local councils and so on. Four weeks without parliamentary meetings set aside during the year and the parliamentary recess (four weeks in summer, two at Christmas/New Year) can also be used for constituency duties.

MEPs may employ staff to help them, typically three or four split between their constituency office and office in Parliament.

Because MEPs sit in a parliament with powers over fewer high profile subjects than national parliaments (few or no powers over health, education, housing, law & order or defence, but significant powers over environmental standards, consumer protection, trade, employment law) their public profile in their home state is typically lower than that of national parliamentarians, at least those of the latter who are ministers or opposition spokesmen.

Some MEPs choose to make their family home in or near Brussels rather than in their home state.

Since the ratification and entry into force of the Lisbon Treaty the adoption of nearly all EU legislation requires the approval of both the European Parliament and the Council of Ministers. Under the co-decision procedure, they each have up to three readings of legislative proposals put forward by the European Commission in which they can each amend the proposal, but must ultimately approve a text in identical terms for it to be passed. This amounts to bicameralism.

MEPs also elect the President of the Commission, on the basis of a proposal by the European Council and, following public hearings of the candidates, approve the appointment of the Commission as a whole. The Parliament may also dismiss the Commission in a vote of no-confidence (for instance, in 1999, the Commission presided by Jacques Santer resigned when faced with the certain adoption of such a vote of no confidence). MEPs may table parliamentary questions for Question time or for a written answer.

The EU's annual budget is adopted jointly by Parliament and the Council of ministers, within overall limit on EU spending decided on by unanimous agreement of all Member States and a multilateral Financial Framework laid down by Council with Parliament's consent.

The Parliament also elects the European Ombudsman and holds hearings with candidates for the President and Board members of European Central Bank, the Court of Auditors and various EU agencies.

Until 2009, MEPs were paid (by their own Member State) exactly the same salary as a member of the lower House of their own national parliament. As a result, there was a wide range of salaries in the European Parliament. In 2002, Italian MEPs earned €130,000, while Spanish MEPs earned less than a quarter of that at €32,000.[10]

However, in July 2005 the Council agreed to a single statute for all MEPs, following a proposal by the Parliament. Thus, since the 2009 elections, all MEPs receive a basic yearly salary of 38.5% of a European Court judge's salary - being around €84,000. This represents a pay-cut for MEPs from some member states (e.g. Italy, Germany, and Austria), a rise for others (particularly the low-paid Eastern European Members) and status quo for those from the United Kingdom (depending on the euro-pound exchange rate). The much-criticised expenses arrangements were also partially reformed.[11]

Members declare their financial interests, which are published annually in a register and available on the Internet.

Under the protocol on the privileges and immunities of the European Union, MEPs in their home state receive the same immunities as their own national parliamentarians. In other member states, MEPs are immune from detention and from legal proceedings, except when caught in the act of committing an offence. This immunity may be waived by application to the European Parliament by the authorities of the member state in question.

Around a third of MEPs have previously held national parliamentary mandates, and over 10% have ministerial experience at a national level. There are usually a number of former prime ministers and former members of the European Commission. Many other MEPs have held office at a regional or local level in their home states.

The so-called "dual mandate"—in which an individual is a member of both his or her national parliament and the European Parliament, was officially discouraged by a growing number of political parties and Member States, and is prohibited as of 2009. In the 2004-2009 Parliament, a small number of members still held a dual mandate, such as MEPs Baroness Ludford and Baroness Nicholson of Winterbourne (both UK Liberal Democrats who also sat in the House of Lords). Notably, Ian Paisley and John Hume once held "triple mandates" as MEP, MP in the House of Commons, and MLA in the Northern Ireland Assembly simultaneously.

The proportion of MEPs elected in 2009 who were female was about 34 percent (in2004 it was 30 percent and back in 1979 it was just 16.5 percent), a higher percentage than most national parliaments. This figure varies considerably among the various national delegations, however. Of UK members, for instance, approaching half of the Labour MEPs are female. The figure for the Parliament elected in 2009 is 35 percent.

The oldest member is Giovanni Berlinguer, born in 1924; the former communist was present at the signing of the Treaty of Rome in 1957. The youngest is Amelia Andersdotter, born in 1987, who joined the parliament in 2009.

There are invariably numerous figures in the Parliament who are already well known for a wide variety of other reasons. For example, in the 2004-2009 Parliament:

Allegations have been made of individual members accepting money in exchange for promoting lobbyists' interests. In 2011, Ernst Strasser resigned following such allegations, though he denied wrongdoing.[12]

As the Act of 20 September 1976 concerning the election of the Members of the European Parliament by direct universal suffrage doesn't regulate the matter, today there are many Members of the European Parliaments who were convicted, also for serious crimes like corruption charges, illegal financial practices or discrimination.[13] MEPs with criminal records are for example: Vito Bonsignore and Aldo Patriciello (European people's party, EPP) and Mario Borghezio (EFD).

European citizens are eligible for election in the member state where they reside (subject to the residence requirements of that state); they do not have to be a national of that state. The following citizens have been elected in a state other than their native country;[14]

It is conventional for countries acceding to the European Union to send a number of observers to Parliament in advance. The number of observers and their method of appointment (usually by national parliaments) is laid down in the joining countries' Treaties of Accession.

Observers may attend debates and take part by invitation, but they may not vote or exercise other official duties. When the countries then become full member states, these observers become full MEPs for the interim period between accession and the next European elections. From 26 September 2005 to 31 December 2006, Bulgaria had 18 observers in Parliament and Romania 35. These were selected from government and opposition parties as agreed by the countries' national parliaments. Following accession on 1 January 2007, the observers became MEPs (with some personnel changes).