Committees of the European Parliament

Committees of the European Parliament

The Committees of the European Parliament are designed to aid the European Commission in initiating legislation.

Reports are usually compiled by a rapporteur, who is appointed by the chairman of the Committee, selected from amongst the Members or permanent substitutes.

In the process of proposing and drafting legislation, the European Commission will consult the various Standing Committees during the Codecision procedure, and these committees will advise the Commission by producing reports, proposing amendments to the draft legislation, and providing, if necessary, a drafted legislative resolution.

In the event of at least one-tenth of the Members objecting to any particular amendment, the amendment will be put to a vote at the Committee’s next meeting.

Similarly, unless at least one-tenth of Committee Members object, Committees can also pass legislation back to the Commission without amendments.

Committees are also able to produce non-legislative reports. The appointed rapporteur is responsible for preparing the report, and presenting it to Parliament on the Committee’s behalf. These reports must include a motion for a resolution, an explanatory statement, and must also outline financial implications.

Committees can also produce reports relevant to their competence, without having to be consulted. These are called “Own-Initiative Reports”, and are used to submit a motion for a resolution.

Amendments that are proposed by the secondary Committee will be voted on by the Committee responsible for producing the report.

If the Conference of Presidents decides that a requested report falls equally to two Committees, both Committees will agree upon a joint timetable, and shall work together in producing the report. 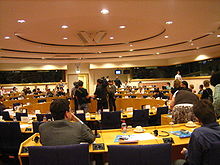 A Committee room in the Parliament

On the 25th of April 2007 MEPs voted to set up a temporary committee on climate change. The committee will have a year to come up with proposals on the EU's future integrated climate-change policy, to coordinate the EP's position in this field, to assess the latest evidence on climate change and to evaluate the cost of action[1].

Following the 2009 elections, in light of the Late 2000s recession, Parliament set up a Special Committee on the Financial, Economic and Social Crisis.[2]