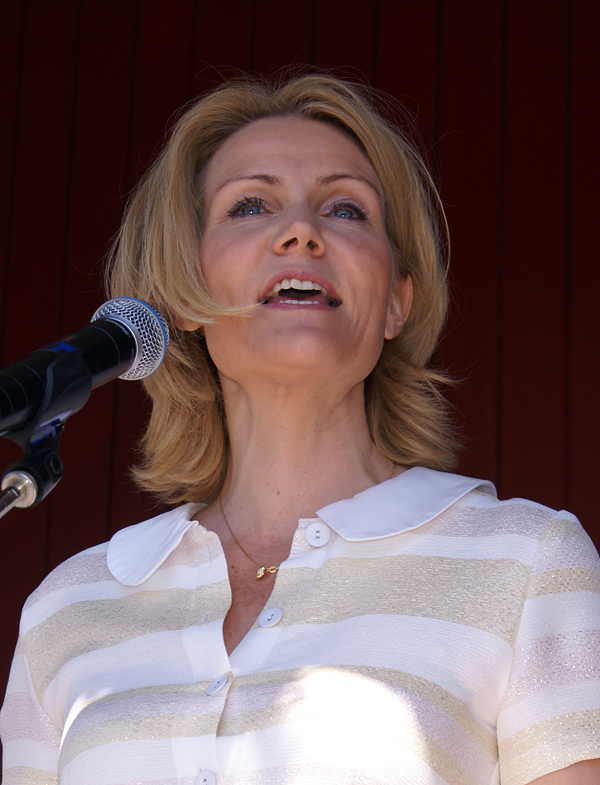 Helle Thorning-Schmidt IPA| [⁽ˈ⁾hɛlə tˢɒːneŋ ˈsmed̥] (born ) is a Danish politician. She was elected leader of the Danish Social Democrats by the party members on , ahead of the other candidate, . She replaced , who had resigned when he lost the to the sitting government coalition of .

She led the Social Democrats through the where, despite modest gains, the party was forced into a third term in opposition. The party was also unable to regain its position as the largest party in the . Since 2005 she has represented a constituency in a part of the Danish capital Copenhagen called Østerbrokredsen.

She was against holding a referendum on the European Reform Treaty. [ [http://news.bbc.co.uk/1/hi/world/europe/7060654.stm Denmark announces snap elections] , 24 October 2007] During her 2007 campaign she promised to relax restrictions on asylum seekers and immigrants. [ [http://news.bbc.co.uk/1/hi/world/europe/7087474.stm Danes in poll tussle over migrants] , BBC News 13 November 2007] She also opposed tax cuts announced by , instead she would like to see more money spent on welfare. The party also campaigned on a platform of combating increased inequalities in society, and fighting global warming by making 45% of Denmark's energy from renewable sources by 2025. [ [http://www.guardian.co.uk/world/2007/nov/09/gwladysfouche1 Denmark: A political guide] , 9 November 2007]

Although her party again lost two seates in the 2007 election (now 45 seats), her leadership wasn't questioned by her party.

According to a opinion poll carried out by Gallup, the opposition centre-left was on 49.8% compared to 49.6% to the centre-right. This would leave the centre-left on 88 seats, one short of a majority, discounting the and seats. [ [http://www.berlingske.dk/article/20080628/politik/706280036/ Oppositionen går på ferie med flertal - Politik ] ]

Through her marriage to , she is the daughter-in-law of , former leader of the British Labour Party, and . They have two children.