The President of the Council of Ministers (Italian: Presidente del Consiglio dei Ministri), usually referred to in English as the prime minister of Italy, is the head of government of the Italian Republic. The formal Italian order of precedence lists the office as being ceremonially the fourth most important Italian state office, although in practice the prime minister is the most powerful, and thus de facto, leader of the Italian government.

While the office is similar to those in most other parliamentary systems, the Italian prime minister has less authority than some of his counterparts. The prime minister is not authorized to request the dissolution of the Parliament of Italy or to dismiss ministers, and must receive a vote of approval from the Council of Ministers—which holds effective executive power—to execute most political activities.

The office was established by Articles 92 through to 96 of the current Constitution of Italy. The prime minister is appointed by the President of the Republic after each general election. The formal title of the office holder is Presidente del Consiglio dei Ministri; the Italian word for "prime minister" is primo ministro.

The office was first established in 1848 in Italy's predecessor state, the Kingdom of Sardinia—although it was not mentioned in the constitution, the Albertine Statute. The candidate for office was appointed by the king, and presided over a very unstable political system. In its first 60 years of existence (1861-1921), Italy changed its prime minister 37 times. Regarding this situation, the first goal of Benito Mussolini, appointed in 1922, was to abolish the Parliament's ability to put him to a vote of no confidence, thus basing his power on the will of the king and the National Fascist Party alone. With the proclamation of the Italian Republic in 1946, the office received constitutional recognition, but it returned to its traditional instability: 25 men assumed the office in 65 years. 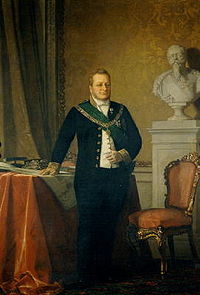 Article 95 of the Italian constitution provides that "the prime minister directs and coordinates the activity of the ministers". This power has been used to a quite variable extent in the history of the Italian state, as it is strongly influenced by the political strength of individual ministers and thus by the parties they represent.

Often the prime minister's activity consists more in mediating between the various parties in the majority coalition, rather than directing the activity of the Council of Ministers. In addition the prime minister's supervisory power is further limited by the fact that, at least formally, he or she does not have the authority to fire those ministers with whom he or she might be in disagreement. The practice of rimpasto ("reshuffle"), or the rarer "individual vote of no confidence" on the part of Parliament, may be considered substitute measures for this formally absent power.

More recently, the rise of a new mode of politics, which according to some is ever more linked to the mediating skills of politicians, and the enactment of majoritarian electoral laws have, in practice, given the prime minister a greater power to make decisions and to direct the internal dynamics of the government.