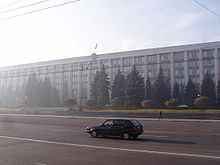 The Government Building – seat of the Moldovan Cabinet

The Prime Minister of Moldova is Moldova's head of government. The prime minister is formally appointed by the President and exercises executive power along with the cabinet subject to parliamentary support.

Chairmen of the Council of People's Commissars

Chairmen of the Council of Ministers