The Grand Duke of Luxembourg is the sovereign monarch and head of state of Luxembourg. Luxembourg has been a grand duchy since 15 March 1815, when it was elevated from a duchy when placed in personal union with the United Kingdom of the Netherlands. Since then, there have been nine monarchs of Luxembourg, including the current incumbent, Henri. 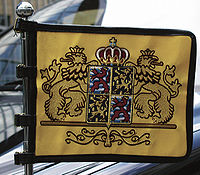 The Constitution of Luxembourg defines the Grand Duke's position:

After a constitutional change in December 2008 resulting from his refusal to sign a law legalizing euthanasia, Grand Duke Henri forfeited his role of signing laws to enact them.[2]

Main article: Line of succession to the throne of Luxembourg

Succession to the throne is governed by Salic law, as dictated by the Nassau Family Pact, first adopted on 30 June 1783.[1] A change in the succession laws introduced equal primogeniture beginning with the descendants of Grand Duke Henri. The right to reign over Luxembourg was until June 2011 passed by agnatic-cognatic primogeniture within the House of Nassau, as stipulated under the 1815 Final Act of the Congress of Vienna and as confirmed by the 1867 Treaty of London.[1] The Nassau Family Pact itself can be amended by the usual legislative process, having been so on 10 July 1907 to exclude the Count of Merenberg branch of the House, which was descended from a morganatic marriage.[3]

The current Grand Duke, Henri, bears the full style "His Royal Highness by the Grace of God, Grand Duke of Luxembourg, Duke of Nassau, Count Palatine of the Rhine, Count of Sayn, Königstein, Katzenelnbogen and Diez, Burgrave of Hammerstein, Lord of Mahlberg, Wiesbaden, Idstein, Merenberg, Limburg and Eppstein." It should, however, be noted that many of the titles are held without regard to the strict rules of Salic inheritance.