The German occupation of Luxembourg in World War II was the period in the history of Luxembourg after it was used as a transit territory to attack France by outflanking the Maginot Line. Plans for the attack had been prepared by 9 October 1939, but execution was postponed several times. On 10 May 1940, the German Wehrmacht invaded Luxembourg, Belgium and the Netherlands.

Eve of the invasion 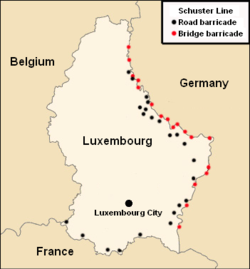 The Schusterline along the border.

The outbreak of World War II on 1 September 1939 put Luxembourg’s government in a delicate situation. On the one hand, the population’s sympathy lay with Britain and France; on the other hand, due to the country's policy since 1867 of strict neutrality, the government adopted a careful non-belligerent stance towards its neighbours. As of 1 September, Radio Luxembourg stopped broadcasting. In spring 1940, fortifications were erected along the borders with Germany and France. The so-called Schusterline, named after its constructor, consisted of massive concrete road blocks with steel doors. The official aim of these road blocks was to slow down the progress of any invading army and give time for the guarantors of Luxembourg's neutrality to take counteractions against the invaders. However, compared to the massive power of the German forces, it only had symbolic character and helped to calm down the population. Except for its small Luxembourgish Volunteer Corps, Luxembourg did not possess an army, due to treaty restrictions.

After several false alarms in the spring of 1940, the certainty of a military conflict between Germany and France grew. Germany stopped the export of coke for the Luxembourgish steel industry.

The steel doors of the Schusterline were ordered closed on 10 May 1940 at 03:15, following movements of German troops on the east side of the border rivers Our, Sauer and Mosel. In the meantime, German special forces dressed as civilians and supported by Germans living in Luxembourg - the so-called Stoßtrupp Lützelburg - tried to sabotage radio broadcasting and the barricades along the German-Luxembourgish border but their attempt failed. The Royal Family was evacuated from their residence in Colmar-Berg to the Grand Ducal palace in Luxembourg City.

The German invasion, made up of the 1st, 2nd, and 10th Panzer Divisions began at 04:35. They did not encounter any significant resistance save for some bridges destroyed and some land mines, since the majority of the Luxembourgish Volunteer Corps stayed in their barracks. Luxembourgish police resisted the German troops, however, to little avail; the capital city was occupied before noon. Total Luxembourgish casualties amounted to 75 police and soldiers captured, six police wounded, and one soldier wounded.[4] At 08:00, elements of the French 3rd Light Cavalry Division (3 DLC) of General Petiet, supported by the 1st Spahi Brigade of Colonel Jouffault and the 2nd company of the 5th Armoured Battalion (5 BCC), crossed the southern border to conduct a probe of German forces; these units later retreated behind the Maginot Line. On the evening of 10 May 1940, most of the nation, with the exception of the south, was occupied by German forces. More than 90,000 civilians evacuated from the canton of Esch-sur-Alzette as a consequence of the advance. 47,000 fled to France, 45,000 fled into the central and northern part of Luxembourg.

Grand Duchess Charlotte and the government of Premier Pierre Dupong fled to France, Portugal and the United Kingdom, before finally settling in Canada for the duration of the war. Charlotte, exiled in London, became an important symbol of national unity. The only official representative left behind was Albert Wehrer, head of a governmental commission, as well as the 41 deputies.

The Nazi regime in Luxembourg 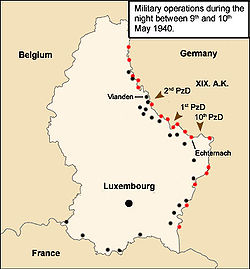 The invasion of The German Wehrmacht in Luxembourg on 9 May 1940. 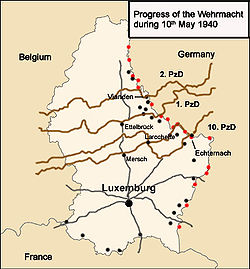 The progress of the German Wehrmacht through Luxembourg in May 1940.

At first, the people thought that they could accommodate themselves with the occupying regime without further harm, just as they had done in the World War I. However, it was soon made clear by the authorities that their fate would be very different this time. The Nazis considered the Luxembourgish people as just another Germanic ethnic group and the Grand Duchy a German territory.

On 17 May 1940, the Volksdeutsche Bewegung was founded in Luxembourg City under the leadership of Damian Kratzenberg. Its main goal was to push the population towards a German-friendly position by means of propaganda and thus to lead Luxembourg Heim ins Reich. After a short period under military administration between 1 May and 2 August, Luxembourg was included into the CdZ-Gebiet Luxemburg on 29 July under the guidance of Gustav Simon. Simon was the civil administrator of the Gaue Trier-Koblenz (later Moselland) and led a propaganda and later terror campaign, known as Heim ins Reich, to convince the population that they were ethnic Germans and a natural part of the Third Reich. As Gauleiter, he was responsible to Adolf Hitler only. His two goals were very clear:

His very first series of decrees made this policy very clear:

A massive propaganda campaign was launched to influence the population, while not only dissidents and critics but also teachers, officials and leading business figures were threatened with losing their jobs unless they joined Nazi organisations, which led to much increased recruitment from all professions. A central database documented the personal opinion regarding the Nazi regime of almost every citizen. People who were openly opposed to the regime lost their jobs or were deported mainly to eastern Germany and in the worst case sent to the death camps where many of them died.

The fate of Luxembourg's Jews

Before the invasion, 3,800 Jews lived in Luxembourg, many of them refugees from Germany. On 10 May 1940, 1,800 of them still remained. After Simon introduced the Nuremberg Laws, life became unbearable for the Jewish population. Their shops, possessions and money were confiscated and all Jewish employees were fired. They were not allowed inside public buildings or to keep pets. Between August 1940 and October 1941, 619 Jews left the country on the orders of the authorities. The Gestapo accompanied them to France and Spain but, since they were rejected there, they went on an endless odyssey.

On 23 August 1941, a curfew was introduced for the Jewish population and they were degraded to second class citizens. The synagogues in Luxembourg City and Esch-sur-Alzette were destroyed; the ones in Ettelbruck and Mondorf-les-Bains were devastated. The Nazis concentrated the remaining Jews in the old monastery of Fünfbrunnen. On 16 October 1941, their transportation began to the Ghetto of Litzmannstadt and after April 1942 to the death camps of Hinzert/Hunsrück, Belsen, Sobibor, Majdanek and Theresienstadt. With the last transport in June 1942, 11 people were sent directly to Auschwitz. Two of them survived.

One prominent Jewish survivor was Alfred Oppenheimer, a member of the Consistoire (similar to the Jewish Councils of occupied eastern Europe). Together with his family, he was deported to concentration camp, where his wife was killed and then to Auschwitz where his son Rene was gassed. Alfred Oppenheimer survived the death camp and was one of the witnesses at the trial of Adolf Eichmann. He returned to live in Luxembourg until his death aged over 90, and was known for his involvement in public education about the Nazi regime and the Holocaust. The Prix René Oppenheimer was created in memory of his son.

The general public were slow to react at first, still feeling shock from the invasion of 1914–1918. Furthermore the royal family and the government had silently fled into exile. In general the different reactions of the population can be grouped in the following categories:

The Luxembourgish resistance was carried out by only a small fraction of the population. Its formation was spontaneous and slow at first. The first groups were formed in autumn 1940–1941. In the beginning they worked without coordination and from different motivations, for instance Liberals opposed to the anti-Jewish policies and in favour of democracy as well as conservative Roman Catholics with sometimes more or less anti-Jewish tendencies. Some of the latter category also were at the same time opposed to the Soviet Union and "Judeo-Bolshevism", hoping that Prussian generals of the Wehrmacht would defeat Joseph Stalin and the Red Army, while at the same time hiding Jews and anti-Nazi clergy mixed together in their farms. The Luxembourg Resistance was joined by the Communist Party of Luxembourg after June 1941 (Operation Barbarossa).

Members of the Luxembourgish resistance who fought at the Battle of Vianden.

The different groups were:

The different groups merged in March 1944 into the Union. The actions against the Nazi regime were largely limited to psychological warfare and armed actions were less common. Many young men joined the armed resistance in France and Belgium. The main accomplishment of the Luxembourgish resistance, which should not be underestimated, was the moral support for the population through the distribution of flyers, graffiti, and by hiding youths who refused to serve in the German Wehrmacht.

Several well-known Catholic and Communist households, and many parishes and priories, also kept a number of Jewish Luxembourgish civilians and foreign Jews hidden and safe.

The Luxembourgian general strike of 1942 was a pacific resistance movement organised within a short time period to protest against a directive that incorporated the Luxembourg youth into the Wehrmacht. A national general strike, originating mainly in Wiltz, paralysed the country and prompted the occupying German authorities to respond violently by sentencing 21 strikers to death.

Collaboration with the Nazi occupation is an aspect less often talked about in Luxembourg. These collaborators were mainly found within the Volksdeutschen Bewegung, an organisation which supported the Nazi regime and participated in the dismantlement of the Luxembourgish state. The most loyal members were joined by individuals who gave way to either pressure or opportunism. Some historians estimate that the size of the collaboration was approximately similar to that of the resistance. About 2,000 collaborators were found guilty of treason after the end of the war, including nine individuals who were executed. Others remained incarcerated until the 1950s, when most were amnestied.

The majority of the population

The majority of the population kept their heads low to avoid any conflict with the authorities; however, they did not hide their resentments completely. This attitude became obvious through subtle but effective actions:

Faced with opposition from the general public the regime felt compelled to take brutal measures against any form of resistance.[citation needed] After the general strike of 1942, Gustav Simon proclaimed a state of emergency and introduced the German Standgerichte. Thousands were arrested and tortured. Hundreds died in the concentration camps. Whole families were deported to eastern Germany and replaced by German families, mainly from South-Tyrol and Eastern Europe. The headquarters of the Gestapo, the Villa Pauly, became the symbol of this terror.[citation needed] 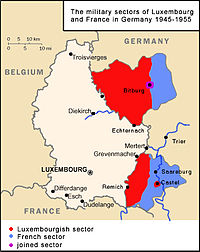 Luxembourg was liberated by Allied forces in September 1944. They entered the capital city on 10 September 1944. The Germans retreated without fighting. One month before the start of the Battle of the Bulge, 250 soldiers of the Waffen-SS had unsuccessfully tried to recapture the town of Vianden from the Luxembourgish Resistance during the Battle of Vianden. During the Battle of the Bulge, the northern part of the country was hit by artillery from a special unit that the Germans designed to send shells up to 40 km (25 mi) away (see V3), but the Germans did not take the city.

Luxembourg's participation in the occupation of Germany 1945–1955

Following the war, Luxembourgish troops took part in the occupation of Germany, contributing troops that were part of the force in the occupation zone controlled by the French, beginning in late 1945. Luxembourgish forces functioned under overall French command within the zone and were responsible for the areas of Bitburg/Eifel and parts of Saarburg. They were withdrawn from Saarburg in 1948, and from Bitburg/Eifel in July 1955.