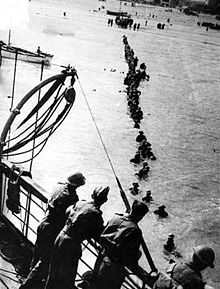 British troops evacuating Dunkirk's beaches. Many stood shoulder deep in water for hours, waiting to board the vessels.

The Dunkirk evacuation, commonly known as the Miracle of Dunkirk, code-named Operation Dynamo by the British, was the evacuation of Allied soldiers from the beaches and harbour of Dunkirk, France, between 26 May and the early hours of 3 June 1940, because the British, French and Belgian troops were cut off by the German army during the Battle of Dunkirk in the Second World War.[1][2] The evacuation was ordered on 26 May.[3] In a speech to the House of Commons, Winston Churchill called the events in France "a colossal military disaster", saying that "the whole root and core and brain of the British Army" had been stranded at Dunkirk and seemed about to perish or be captured. In his We shall fight on the beaches speech on 4 June, he hailed their rescue as a "miracle of deliverance".[4]

On the first day, only 7,011 men were evacuated, but by the ninth day, a total of 338,226 soldiers (198,229 British and 139,997 French)[5] had been rescued by the hastily assembled fleet of 850 boats. Many of the troops were able to embark from the harbour's protective mole onto 42 British destroyers and other large ships, while others had to wade from the beaches toward the ships, waiting for hours to board, shoulder-deep in water. Others were ferried from the beaches to the larger ships, and thousands were carried back to Britain by the famous "little ships of Dunkirk", a flotilla of around 700 merchant marine boats, fishing boats, pleasure craft and Royal National Lifeboat Institution lifeboats—the smallest of which was the 15 ft (4.6 m) fishing boat Tamzine, now in the Imperial War Museum—whose civilian crews were called into service for the emergency. The "miracle of the little ships" remains a prominent folk memory in Britain.[6][7]

Operation Dynamo took its name from the dynamo room in the naval headquarters below Dover Castle, which contained the dynamo that provided the building with electricity during the war. It was in this room that British Vice Admiral Bertram Ramsay planned the operation and briefed Winston Churchill as it was under way.[8]

Due to war-time censorship and the desire to keep up the morale of the nation, the full extent of the unfolding "disaster" around Dunkirk was not publicised. However, the grave plight of the troops led King George VI to call for an unprecedented week of prayer. Throughout the country, people prayed on 26 May for a miraculous delivery.[9] The Archbishop of Canterbury led prayers "for our soldiers in dire peril in France". Similar prayers were offered in synagogues and churches throughout Britain that day, confirming the public suspicion of the desperate plight of the troops.[10]

Initial plans called for the recovery of 45,000 men from the British Expeditionary Force (BEF) within two days, at which time it was expected that German troops would be able to block further evacuation. Only 25,000 men escaped during this period, including 7,000 on the first day.[11] Ten additional destroyers joined the rescue effort on 26 May and attempted rescue operations in the early morning, but were unable to closely approach the beaches, although several thousand were rescued. However, the pace of evacuation from the shrinking Dunkirk pocket steadily increased.

On 29 May, 47,000 British troops were rescued[12] in spite of the first heavy aerial attack by the Luftwaffe in the evening. The next day, an additional 54,000 men[13] were embarked, including the first French soldiers.[14] 68,000 men and the commander of the BEF—Lord Gort—evacuated on 31 May.[15] A further 64,000 Allied soldiers departed on 1 June,[16] before the increasing air attacks prevented further daylight evacuation.[11] The British rearguard left the night of 2 June, along with 60,000 French soldiers.[16] An additional 26,000 French troops were retrieved the following night before the operation finally ended.[11]

Two French divisions remained behind to protect the evacuation. Though they halted the German advance, they were soon captured. The remainder of the rearguard, largely French, surrendered on 3 June 1940. The next day, the BBC reported, "Major-General Harold Alexander [the commander of the rearguard] inspected the shores of Dunkirk from a motorboat this morning to make sure no-one was left behind before boarding the last ship back to Britain."[2][17]

Most of the "little ships" were private fishing boats and pleasure cruisers, but commercial vessels also contributed, including a number from as far away as the Isle of Man and Glasgow. Guided by naval craft across the English Channel from the Thames Estuary and Dover, these smaller vessels were able to move in much closer to the beaches and acted as shuttles between the shore and the destroyers, lifting troops who were queuing in the water, some of whom stood shoulder-deep for many hours to board the larger vessels. Thousands of soldiers were also taken in the little ships back to Britain.

Thirty-nine Dutch coasters—which had escaped the occupation of the Netherlands by the Germans on 10 May—were asked by the Dutch shipping bureau in London to assist. The Dutch coasters—able to approach the beaches very closely due to their flat bottoms—saved 22,698 men for the loss of seven boats.[18]

Nineteen lifeboats of the Royal National Lifeboat Institution (RNLI) sailed to Dunkirk. Those from the lifeboat stations at Ramsgate and Margate were taken directly to France with their usual volunteer crews, but the others sailed to Dover where they were requisitioned by the Royal Navy, which provided the crews. Some of the RNLI crews remained behind in Dover and set up a workshop to repair and fuel the little ships. One lifeboat—The Viscountess Wakefield—was lost after it was run onto the beach at Dunkirk.[19] The Jane Holland was holed when a motor torpedo boat rammed her and her engine failed after being machine gunned by an aircraft. She was abandoned but later found adrift, towed back to Dover and repaired. She returned to service on 5 April 1941.[20]

The Royal Navy's most significant losses in the operation were six destroyers:

The Royal Navy claimed the destruction of 35 Luftwaffe aircraft from ships' gunfire during the period of 27 May-1 June, and damage to another 21 aircraft.[27]

Winston Churchill revealed in his volumes on World War II that the Royal Air Force (RAF) played a most important role protecting the retreating troops from the Luftwaffe. Churchill also said that the sand on the beach softened the explosions from the German bombs.

Between 26 May and 4 June, the RAF flew a total of 4,822 sorties over Dunkirk, losing just over 100 aircraft in the fighting.[28] Fortunately for the BEF, bad weather kept the Luftwaffe grounded for much of operation thus helping to reduce the losses. [29]

The RAF claimed 262 Luftwaffe aircraft destroyed over Dunkirk.[30] The RAF lost 177 aircraft between 26 May and 3 June, while the Luftwaffe lost 240 aircraft during the same time frame.[31] Fighter losses from units based in France and Britain from 10 May-4 June were 432, while total RAF losses from all causes during all of May and June were 959, of which 477 were fighters.[32] However, most of the dogfights took place far from the beaches and the retreating troops were largely unaware of this vital assistance. As a result, many British soldiers bitterly accused the airmen of doing nothing to help.[33]

Rescued British troops gathered in a ship at Dunkirk.

Dunkirk-rescued French troops disembarking at a port on the south coast of England.

Before the operation was completed, the prognosis had been gloomy, with Winston Churchill warning the House of Commons to expect "hard and heavy tidings". Subsequently, Churchill referred to the outcome as a "miracle", and the British press presented the evacuation as a "disaster turned to triumph" so successfully that Churchill had to remind the country, in a speech to the House of Commons on 4 June, that "we must be very careful not to assign to this deliverance the attributes of a victory. Wars are not won by evacuations." Nevertheless, exhortations to the "Dunkirk spirit", a phrase used to describe the tendency of the British public to pull together and overcome times of adversity, are still heard in Britain today.[34]

The rescue of the British troops at Dunkirk provided a psychological boost to British morale; to the country at large it was spun as a major victory. While the British Army had lost a great deal of its equipment and vehicles in France, it still had most of its soldiers and was able to assign them to the defence of Britain. Once the threat of invasion receded, they were transferred overseas to the Middle East and other theatres and also provided the nucleus of the army that returned to France in 1944.

German land forces might have pressed their attack on the British Expeditionary Force (BEF) & allies, especially having secured the ports of Calais and Boulogne. For years, it was assumed that Adolf Hitler ordered the German Army to stop the attack, favouring bombardment by the Luftwaffe. However, according to the Official War Diary of Army Group A, Generalfeldmarshall Gerd von Rundstedt – the Chief of the General Staff, disconcerted by the vulnerability of his flanks and supply to his forward troops, ordered the halt.[citation needed] Hitler merely validated the order several hours after the fact. This lull in the action provided the Allies a few days to evacuate by sea.

Several high-ranking German commanders—for example, Generals Erich von Manstein and Heinz Guderian, as well as Admiral Karl Dönitz—considered the failure of the German High Command to order a timely assault on Dunkirk to eliminate the BEF to be one of the major mistakes the Germans had made on the Western Front in WWII.

More than 100,000 evacuated French troops were quickly and efficiently shuttled to camps in various parts of southwestern England where they were temporarily lodged before quickly being repatriated.[35] British ships ferried French troops to Brest, Cherbourg and other ports in Normandy and Brittany, although only about ½ of the repatriated troops were deployed against the Germans before the armistice. For many French soldiers, the Dunkirk evacuation was not a salvation, but represented only a few weeks' delay before being made POWs by the German army after their return in France.[36]

In France, the perceived preference of the Royal Navy for evacuating British forces at the expense of the French led to some bitter resentment. The French Admiral François Darlan originally ordered that the British forces should receive preference, but Churchill intervened at a 31 May meeting in Paris to order that the evacuation should proceed on equal terms and the British would form the rearguard.[37] A few thousand French forces eventually surrendered, but only after the evacuation effort had been extended for a day to bring 26,175 Frenchmen to Britain on 4 June.

For every seven soldiers who escaped through Dunkirk, one man was left behind as a prisoner of war (POW). The majority of these prisoners were sent on forced marches into Germany. Prisoners reported brutal treatment by their guards, including beatings, starvation, and murder. In particular, the British prisoners complained that French prisoners were given preferential treatment.[38] Another major complaint was that German guards kicked over buckets of water that had been left at the roadside by French civilians.[39] Many of the prisoners were marched to the town of Trier, with the march taking as long as 20 days. Others were marched to the river Scheldt and were sent by barge to the Ruhr. The prisoners were then sent by rail to POW camps in Germany.[40] The majority (those below the rank of corporal) then worked in German industry and agriculture for five years.[41]

The very significant loss of military equipment abandoned in Dunkirk reinforced the financial dependence of the British government on the U.S.[citation needed]

The St George's Cross flown from the jack staff is known as the Dunkirk jack and is only flown by civilian ships and boats of all sizes that took part in the Dunkirk rescue operation in 1940. The only other ships permitted to fly this flag at the bow are those with a Royal Navy Admiral on board.