Operation Paperclip was the Office of Strategic Services (OSS) program used to recruit the scientists of Nazi Germany for employment by the United States in the aftermath of World War II (1939–45). It was conducted by the Joint Intelligence Objectives Agency (JIOA), and in the context of the burgeoning Soviet–American Cold War (1945–91); one purpose of Operation Paperclip was to deny German scientific knowledge and expertise to the USSR[1] and the UK.[2]

Although the JIOA's recruitment of German scientists began after the European Allied victory (8 May 1945), US President Harry Truman did not formally order the execution of Operation Paperclip until August 1945. Truman's order expressly excluded anyone found "to have been a member of the Nazi Party, and more than a nominal participant in its activities, or an active supporter of Nazi militarism." Said restrictions would have rendered ineligible most of the scientists the JIOA had identified for recruitment, among them rocket scientists Wernher von Braun and Arthur Rudolph, and the physician Hubertus Strughold, each earlier classified as a "menace to the security of the Allied Forces".

To circumvent President Truman's anti-Nazi order, and the Allied Potsdam and Yalta agreements, the JIOA worked independently to create false employment and political biographies for the scientists. The JIOA also expunged from the public record the scientists' Nazi Party memberships and régime affiliations. Once "bleached" of their Nazism, the US Government granted the scientists security clearance to work in the United States. Paperclip, the project's operational name, derived from the paperclips used to attach the scientists' new political personae to their "US Government Scientist" JIOA personnel files.[3]

Having failed to conquer the USSR with Operation Barbarossa (June–December 1941), the Siege of Leningrad (September 1941–January 1944), Operation Nordlicht (Northern Light, August–October 1942), and the Battle of Stalingrad (July 1942–February 1943), Nazi Germany found itself at a logistical disadvantage. The failed conquest had depleted German resources and its military-industrial complex was unprepared to defend the Großdeutsches Reich (Greater German Reich) against the Red Army's westward counterattack. By early 1943, the German government began recalling from combat a number of scientists, engineers, and technicians; they returned to work in research and development to bolster German defense for a protracted war with the USSR. The recall from frontline combat included 4,000 rocketeers returned to Peenemünde, in north-east coastal Germany, to wit:[4][5]

Overnight, Ph.D.s were liberated from KP duty, masters of science were recalled from orderly service, mathematicians were hauled out of bakeries, and precision mechanics ceased to be truck drivers.
—Dieter K. Huzel, Peenemünde to Canaveral

The Nazi government's recall of their now-useful intellectuals for scientific work first required identifying and locating the scientists, engineers, and technicians, then ascertaining their political and ideological reliability. Werner Osenberg, the engineer-scientist heading the Wehrforschungsgemeinschaft (Military Research Association), recorded the names of the politically-cleared men to the Osenberg List, thus reinstating them to scientific work.[6]

In March 1945, at Bonn University, a Polish laboratory technician found pieces of the Osenberg List stuffed in a toilet; the list subsequently reached MI6, who transmitted it to US Intelligence.[7][8] Then US Army Major Robert B. Staver, Chief of the Jet Propulsion Section of the Research and Intelligence Branch of the U.S. Army Ordnance Corps, used the Osenberg List to compile his list of German scientists to be captured and interrogated; Wernher von Braun, Nazi Germany's premier rocket scientist headed Major Staver's list.[9] 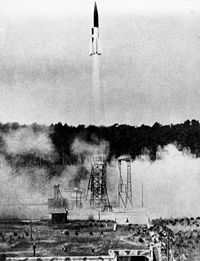 Operation Overcast — Major Staver's original intent was only to interview the scientists, but what he learned changed the operation's purpose. On 22 May 1945, he transmitted to US Pentagon headquarters Colonel Joel Holmes's telegram urging the evacuation of German scientists, and their families, as most "important for [the] Pacific war" effort.[8] Most of the Osenberg List engineers worked at the Baltic coast German Army Research Center Peenemünde, developing the V-2 rocket; after capturing them, the Allies initially housed them and their families in Landshut, Bavaria, in southern Germany.

Beginning on 19 July 1945, the US Joint Chiefs of Staff (JCS) managed the captured ARC rocketeers under a program called Operation Overcast. However, when the "Camp Overcast" name of the scientists' quarters became locally-known, the program was renamed Operation Paperclip in March 1946. Despite these attempts at secrecy, later that year the press interviewed several of the scientists.[8][9][9][10]

Regarding Operation Alsos, Allied Intelligence described nuclear physicist Werner Heisenberg, the German nuclear energy project principal, as " . . . worth more to us than ten divisions of Germans." In addition to rocketeers and nuclear physicists, the Allies also sought chemists, physicians, and naval weaponeers.[11]

Meanwhile, the Technical Director of the German Army Rocket Center, Wernher von Braun, was jailed at P.O. Box 1142, a secret military-intelligence prison in Fort Hunt, Virginia in the United States. Since the prison was unknown to the International Red Cross, its operation by the US was in violation of the Geneva Convention. Although Von Braun's interrogators pressured him, he was not tortured; however in 1944 another PoW, U-boat Captain Werner Henke was shot and killed while climbing the fence at Fort Hunt.[12] 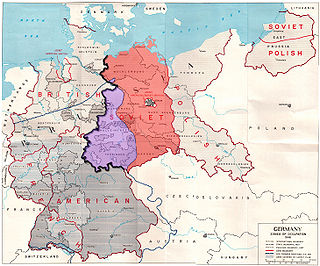 The Allied zones of occupation in post-war Germany, highlighting the Soviet zone (red), the inner German border (heavy black line) and the zone from which British and American troops withdrew in July 1945 (purple). The provincial boundaries are those of pre-Nazi Weimar Germany, before the present Länder (federal states) were established.

Early on the U.S. created the Combined Intelligence Objectives Subcommittee (CIOS). This provided the information on targets for the T-Forces that went in and targeted scientific, military and industrial installations (and their employees) for their know-how. Initial priorities were advanced technology, such as infrared, that could be used in the war against Japan; finding out what technology had been passed on to Japan; and finally to halt the research. A project to halt the research was codenamed "Project Safehaven", and it was not initially targeted against the Soviet Union; rather the concern was that German scientists might emigrate and continue their research in countries such as Spain, Argentina or Egypt, all of which had sympathized with Nazi Germany.

Much U.S. effort was focused on Saxony and Thuringia, which by July 1, 1945 would become part of the Soviet Occupation zone. Many German research facilities and personnel had been evacuated to these states, particularly from the Berlin area. Fearing that the Soviet takeover would limit U.S. ability to exploit German scientific and technical expertise, and not wanting the Soviet Union to benefit from said expertise, the U.S. instigated an "evacuation operation" of scientific personnel from Saxony and Thuringia, issuing orders such as:

On orders of Military Government you are to report with your family and baggage as much as you can carry tomorrow noon at 1300 hours (Friday, 22 June 1945) at the town square in Bitterfeld. There is no need to bring winter clothing. Easily carried possessions, such as family documents, jewelry, and the like should be taken along. You will be transported by motor vehicle to the nearest railway station. From there you will travel on to the West. Please tell the bearer of this letter how large your family is.

By 1947 this evacuation operation had netted an estimated 1,800 technicians and scientists, along with 3,700 family-members. Those with special skills or knowledge were taken to detention and interrogation centers, such as one code-named DUSTBIN,[13] to be held and interrogated, in some cases for months.

A few of the scientists were gathered up in Operation Overcast, but most were transported to villages in the countryside where there were neither research facilities nor work; they were provided stipends and forced to report twice weekly to police headquarters to prevent them from leaving. The Joint Chiefs of Staff directive on research and teaching stated that technicians and scientists should be released "only after all interested agencies were satisfied that all desired intelligence information had been obtained from them".

On 5 November 1947, the Office of Military Government of the United States (OMGUS), which had jurisdiction over the western part of occupied Germany, held a conference to consider the status of the evacuees, the monetary claims that the evacuees had filed against the U.S., and the "possible violation by the U.S. of laws of war or Rules of Land Warfare". The OMGUS director of Intelligence R. L. Walsh initiated a program to resettle the evacuees in the Third world, which the Germans referred to as General Walsh's "Urwald-Programm" (jungle program), however this program never matured. In 1948, the evacuees received settlements of 69.5 million Reichsmarks from the U.S., a settlement that soon became severely devalued during the currency reform that introduced the Deutsche Mark as the official currency of western Germany.

John Gimbel concludes that the U.S. put some of Germany's best minds on ice for three years, therefore depriving the German recovery of their expertise.[14] 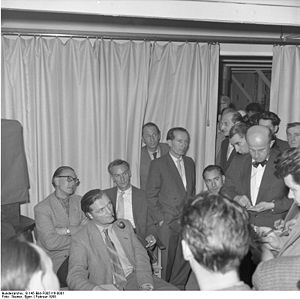 German scientists repatriated from Sukhumi in February 1958. (see Forced labor of Germans in the Soviet Union)

In May 1945, the US Navy received Dr. Herbert A. Wagner, the inventor of the Hs 293 missile; for two years, he first worked at the Special Devices Center, at Castle Gould and at Hempstead House, Long Island, New York; in 1947, he moved to the Naval Air Station Point Mugu.[15]

Beginning in late 1945, three rocket-scientist groups arrived in the US for duty at Fort Bliss, Texas, and at White Sands Proving Grounds, New Mexico, as "War Department Special Employees".[4]:27

In early 1950, legal US residency for some of the Project Paperclip specialists was effected through the US consulate in Ciudad Juárez, Chihuahua, Mexico; thus, Nazi scientists legally entered the US from Latin America.[4]:226[9]

Eighty-six aeronautical engineers were transferred to Wright Field, where the US had Luftwaffe aircraft and equipment captured under Operation Lusty (Luftwaffe Secret Technology).[17]

In 1959, ninety-four Operation Paperclip men went to the US, including Friedwardt Winterberg and Friedrich Wigand.[15] Throughout its operations to 1990, Operation Paperclip imported 1,600 men, as part of the intellectual reparations owed to the US and the UK, some $10 billion in patents and industrial processes.[15][19]

During the decades after they were included in Operation Paperclip, some scientists were investigated because of their activities during World War II. Arthur Rudolph was deported in 1984, but not prosecuted, and West Germany granted him citizenship.[20] Similarly, Georg Rickhey, who came to the United States under Operation Paperclip in 1946, was returned to Germany to stand trial at the Mittelbau-Dora war crimes trial in 1947, was acquitted, and returned to the United States in 1948, eventually becoming a U.S. citizen.[21] The aeromedical library at Brooks Air Force Base in San Antonio, Texas had been named after Hubertus Strughold in 1977. However, it was later renamed because documents from the Nuremberg War Crimes Tribunal linked Strughold to medical experiments in which inmates from Dachau were tortured and killed.[22]