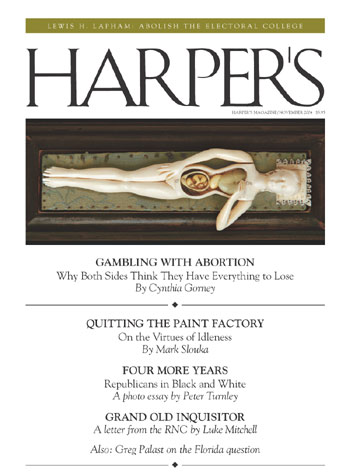 "Harper's Magazine" (also "Harper's") is a monthly, general-interest of literature, politics, culture, finance, and the arts. It is the second-oldest, continuously-published monthly magazine ("" is the oldest) in the U.S.; current circulation is more than 220,000 issues. The current editor is , who replaced Lewis Lapham on 31 March 2006. [cite web | url = http://www.washingtonpost.com/wp-dyn/content/article/2006/03/20/AR2006032001945_pf.html | title = Lewis Lapham Lights Up: The Longtime, Two-Time Harper's Editor Is Retiring, but Not Quitting | date = | last = Carlson | first = Peter | publisher = Washington Post | accessdate = 2006-03-27] "Harper's Magazine" has won many . [ [http://www.harpers.org/advertising/OLMediaKit/awardsandhonors.pdf Awards and Honors (PDF)] at Harper's site]

The early issues reprinted material already published in England, but the magazine soon was publishing the work of American artists and writers, and commentary by the likes of Winston Churchill and Woodrow Wilson.

In 1962, Harper & Brothers merged with Row, Peterson & Company, becoming Harper & Row (now ). Later, the magazine was separately incorporated, and was a division of the Minneapolis Star and Tribune Company. On 17 June 1980, the Star Tribune announced it would cease publishing "Harper's Magazine" after the August 1980 issue, however, on 9 July 1980, and his father, Roderick, obtained pledges from the directorial boards of the John D. and Catherine T. MacArthur Foundation, the Atlantic Richfield Company, and CEO to amass the one-and-a-half million dollars needed to establish the Harper's Magazine Foundation that currently publishes the magazine. [Facts on File 1980 Yearbook, pp.501, 582 ]

In 1963, the magazine published the short story, "The Witch of Westport", by Norman Mailer, that later was the basis for the television comedy program . In the 1970s, it published 's reporting of the . In 1971, after the controversial editor left, Lewis H. Lapham became the managing editor, once from 1976 until 1981; and again, from 1983 until 2006.

In 1984, Lapham and MacArthur &mdash; now publisher and president of the foundation &mdash; redesigned "Harper's" and introduced the "Harper's Index" (ironic statistics arranged for thoughtful effect), "Readings", and the "Annotation" departments to complement its fiction, essays, and reportage.

Under the Lapham-MacArthur leadership, "Harper's" magazine continues publishing literary fiction by the likes of John Updike, George Saunders, et al. Politically, "Harper's" is an especially vocal critic of U.S. domestic and foreign policies. Editor Lapham's monthly "Notebook" columns have lambasted the Clinton and the George W. Bush administrations, and, since 2003, the magazine has concentrated on reportage about U.S. war against Iraq, with long articles about the battle for Fallujah, and the cronyism of the American "reconstruction" of Iraq. Moreover, other stories have covered abortion, cloning, and global warming. ["An American Album: One Hundred and Fifty Years of Harper's Magazine", a seven hundred twelve-page illustrated anthology, with an introduction by Lewis H. Lapham and a foreword by ]

In summer of 2006, Harper's serially published John Robert Lennon's novel "Happyland" when its original publisher, , decided not to publish it, fearing a libel lawsuit. The protagonist is doll magnate Happy Masters, whose story parallels the life of , the creatrix of the American Girl dolls business. [ [http://www.nytimes.com/2006/08/27/books/review/Donadio.t.html NYT Book Review] ]