The Prague Offensive (Russian: Пражская стратегическая наступательная операция "Prague Strategic Offensive") was the last major Soviet operation of World War II in Europe. The offensive, and the battle for Prague, was fought on the Eastern Front from 6 May to 11 May 1945. This battle for the city is particularly noteworthy in that it ended after the Third Reich capitulated on 8 May 1945. This battle is also noteworthy in that it was fought concurrently with the Prague Uprising.

From 30 April to 1 May 1945, SS Senior Group Leader (Obergruppenführer) and General of Police Karl Hermann Frank announced over the radio in Prague that he would drown any uprising in a "sea of blood." Frank was also a General of the Waffen SS. The situation in Prague was unstable. Frank knew that several Soviet Army Fronts were advancing towards Prague. More immediately, he was faced with a city population ready to be liberated.

The Soviet assault on Prague crushed the last sizeable pocket of German military resistance in Europe. The Soviet assault on Prague was carried out by 1st (under Ivan Konev), 2nd (Rodion Malinovsky) and 4th Ukrainian Fronts (Andrei Yeremenko). As well as the Soviet armies these Fronts included the Polish Second Army, the First and Fourth Romanian armies and the I Corps of the Czechoslovakian Army. The Soviet Fronts totalled more than two million troops. In order to participate in the Prague Offensive, the troops of the 1st Ukrainian Front made a forced march from south of Berlin just after they had completed their participation in the Battle of Berlin.

On 7 May, General Alfred Jodl, Chief-of-Staff of Oberkommando der Wehrmacht ("German Armed Forces High Command"), signed the surrender of all German forces at SHAEF. OKW had last heard from Schörner on 2 May. He had reported he intended to fight his way west and surrender his army group to the Americans. On 8 May an OKW colonel was escorted through the American lines to see Schörner. The colonel reported Schörner had ordered his operational command to observe the surrender but could not guarantee he would be obeyed everywhere.[3] Later that day Schörner deserted his command and flew to Austria where on 18 May he was arrested by the Americans.[4]

The Czech partisans were aided briefly by the 1st Infantry Division (600th German Infantry Division) of the Russian Liberation Army (ROA). The 1st ROA Infantry Division was commanded by General Sergei Bunichenko (or Bunyachenko), whose division until April 30 had continued to pledge loyalty to the Axis and to Nazi German command. The 1st ROA Infantry Division, composed of members of ethnicities from Russia, was stationed near Prague at the outbreak of the uprising and supported the Czech partisans against the Germans. The ROA was created by former Soviet General Andrey Vlasov as an anti-communist Russian force in the combat against Bolshevism. The ROA forces were attempting to get to pre-arranged positions where they could avoid the Soviets and surrender to the Americans.

By 8 May, General Bunichenko and his 1st ROA Infantry Division sought refuge with the Americans. Bunichenko, Vlasov, and the ROA forces in general were however returned to the Soviet Union, after which they were mostly condemned to the GULAG camps, or in some cases, executed as traitors.

On 9 May 1945, Soviet troops entered Prague. Some remnants of Army Group Centre continued resistance until 11/12 May (see Battle of Slivice). The left flank of the 2nd Ukrainian Front met with troops of the US Third Army (George Patton) in the regions of České Budějovice and Písek, thus completing the encirclement. Later, 1st and 2nd Ukrainian Fronts met with Americans in the regions of Karlovy Vary and Klatovy. German soldiers and ethnic German and a minority of ethnic Czech pro-Nazi civilians fleeing Prague were surprised by the advancing Soviets and completely routed. The local Czech population resumed their hostilities on the surrendered Waffen SS troops regardless of their intentions. In what the veterans of the 20th Waffen Grenadier Division of the SS (1st Estonian) who had laid their weapons down in May 1945 recall as the 'Czech Hell', the local people chased, tortured and humiliated the Waffen-SS men and murdered 500–1000 Estonian POWs.[5][6][7][8] Individual Soviet attacks on German civilians and the expulsion of Germans from Czechoslovakia continued into Autumn, under the supervision of the first post-war Czechoslovak government of Edvard Beneš.

On 5 May, Emanuel Moravec committed suicide. Moravec was infamous among the Czechs as a traitor and as a collaborator with Nazi Germany. He was known as the "Czech Quisling."

On 14 May, Dr. Emil Hácha was arrested in Prague and transferred immediately to a prison hospital. Hácha was the State President of the Protectorate of Bohemia and Moravia, a 1939-created protectorate of the Greater German Empire. He died in prison on 26 June under mysterious circumstances.

In mid-May, the acting Mayor of Prague, Professor Josef Pfitzner, was hanged in public. Konrad Henlein, the leader of the Nazi Party of Sudeten Germans in Czechoslovakia, committed suicide at about the same time.

On 22 May 1946, SS Obergruppenführer Karl Hermann Frank was hanged after being convicted of war crimes.

Dr. Wilhelm Frick, a prominent Nazi official, was convicted of war crimes by the Nuremberg Tribunal and executed on 16 October 1946. Frick also had held the ceremonial post of Protector of Bohemia and Moravia.

SS-Fuehrer (Oberstgruppenführer) Kurt Daluege was captured by American troops and extradited to Czechoslovakia. He was convicted of war crimes by the Czechs, and hanged on 24 October 1946. Among other titles, Daluege was an officer of the Central Reich Security Office (RSHA) and the Governor of the Protectorate of Bohemia and Moravia.

To honor the participants of the operation, the Soviet Union instituted the Medal for the Liberation of Prague. 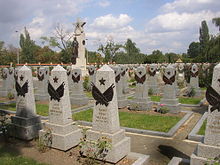 Olšany Cemetery in Prague: Honorary burial site of Soviet soldiers fallen during the battle of the city.