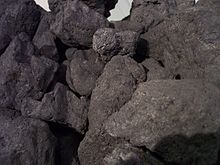 Coke is the solid carbonaceous material derived from destructive distillation of low-ash, low-sulfur bituminous coal. Cokes from coal are grey, hard, and porous. While coke can be formed naturally, the commonly used form is man-made. 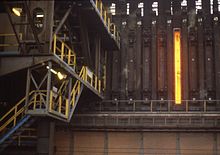 Volatile constituents of the coal—including water, coal-gas, and coal-tar—are driven off by baking in an airless furnace or oven at temperatures as high as 2,000 degrees Celsius. This fuses together the fixed carbon and residual ash. Most modern facilities have "by-product" coking ovens. Today, the volatile hydrocarbons are mainly used, after purification, in a separate combustion process to generate energy. Non by-product coking furnaces or coke furnaces (ovens) burn the hydrocarbon gases produced by the coke-making process to drive the carbonization process.

Bituminous coal must meet a set of criteria for use as coking coal, determined by particular coal assay techniques. These include moisture content, ash content, sulfur content, volatile content, tar, and plasticity. This blending is targeted at producing a coke of appropriate strength (generally measured by coke strength after reaction (CSR), while losing an appropriate amount of mass. Other blending considerations include ensuring the coke doesn't swell too much during production and destroy the coke oven through excessive wall pressures.

The greater the volatile matter in coal, the more by-product can be produced. It is generally considered that levels of 26-29 percent of volatile matter in the coal blend are good for coking purposes. Thus different types of coal are proportionally blended to reach acceptable levels of volatility before the coking process begins.

Natural coke is formed when a coal seam is intersected by a volcanic intrusion. These intrusions heat the surrounding coal in an anoxic atmosphere producing coke in a zone (usually several meters) around the intrusion. However, the coke is of wildly varying strength and ash content and is generally considered unsaleable except in some cases as a thermal product—as it has lost its volatile matter it has lost the ability to be coked again.

Coke is used as a fuel and as a reducing agent in smelting iron ore in a blast furnace. It is there to reduce the iron oxide (haematite) in order to collect iron.

Since smoke-producing constituents are driven off during the coking of coal, coke forms a desirable fuel for stoves and furnaces in which conditions are not suitable for the complete burning of bituminous coal itself. Coke may be burned with little or no smoke under combustion conditions, while bituminous coal would produce much smoke.

Coke was widely used as a substitute for coal in domestic heating following the creation of Smokeless zones in the United Kingdom when the government paid for new grates suitable for the fuel. Ironically the grates required the use of a gas fired poker to light the fuel so the new installation included installation of a gas line adjacent to the fireplace. Most consumers converted to a gas fire designed to work with an existing chimney within a few years.

Highland Park distillery in Orkney malt barley for use in their Scotch whisky in kilns burning a mixture of coke and peat. The peat is burned for the initial stage of roasting the barley - while the barley can still absorb the particular desired aromas of the peat - lasting for approximately 12 hours; then for the final 36 hours the barley is roasted under the heat of the burning coke.[1]

Coke may be used to make synthesis gas, a mixture of carbon monoxide and hydrogen.

The Chinese first used coke for heating and cooking no later than the ninth century AD. By the first decades of the eleventh century, Chinese ironworkers in the Yellow River valley began to fuel their furnaces with coke, solving their fuel problem in that tree-sparse region.[2]

In 1603, Sir Henry Platt suggested that coal might be charred in a manner analogous to the way charcoal is produced from wood. This process was not put into practice until 1642, when coke was used for roasting malt in Derbyshire. Coal cannot be used in brewing because its sulfurous fumes would impart a foul taste to the beer.

In 1709, Abraham Darby I established a coke-fired blast furnace to produce cast iron. Coke's superior crushing strength allowed blast furnaces to become taller and larger. The ensuing availability of inexpensive iron was one of the factors leading to the Industrial Revolution.

In England in the first years of steam railway locomotives, coke was the normal fuel. This resulted from an early piece of environmental legislation; any proposed locomotive had to "consume its own smoke".[3] This was not technically possible to achieve until the firebox arch came into use, but burning coke, with its low smoke emissions, was considered to meet the requirement. However, this rule was quietly dropped and cheaper coal became the normal fuel, as railways gained acceptance among the general public.

In the late 19th century, the coalfields of western Pennsylvania provided a rich source of raw material for coking. In 1885, the Rochester and Pittsburgh Coal and Iron Company[4] constructed the world's longest string of coke ovens in Walston, Pennsylvania, with 475 ovens over a length of one and a quarter miles. Their output reached 22,000 tons per month. 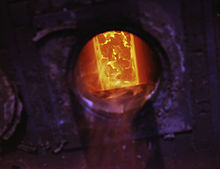 The bulk specific gravity of coke is typically around 0.77. It is highly porous.

The most important properties of coke are ash and sulfur content, which are linearly dependent on the coal used for production. Coke with less ash and sulfur content is highly priced on the market. Other important characteristics are the M10, M25, and M40 test crush indexes, which convey the strength of coke during transportation into the blast furnaces; depending on blast furnaces size, finely crushed coke pieces must not be allowed into the blast furnaces because they would impede gas dynamics. A related characteristic is the Coke strength after reaction (CSR) index; it represents coke's ability to withstand the violent conditions inside the blast furnace before turning into fine particles.

The water content in coke is practically zero at the end of the coking process, but coke is often water quenched to reduce its temperature so that it can be transported inside the blast furnaces. The porous structure of coke absorbs some water, usually 3-6 % of its mass. In some more modern coke plants an advanced method of coke cooling is by air quenching.

Bituminous coal must meet a set of criteria for use as coking coal, determined by particular coal assay techniques. See Section "Production".

The volatility of coke reaches minimum levels at the end of the coking process. 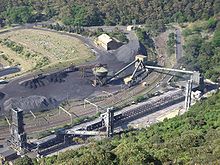 The solid residue remaining from refinement of petroleum by the "cracking" process is also a form of coke. Petroleum coke has many uses besides being a fuel, such as the manufacture of dry cells and electrodes. Gas works manufacturing syngas also produce coke as an end product, called gas house coke.

Fluid coking is a process which converts heavy residual crude into lighter products such as naphtha, kerosene, heating oil, and hydrocarbon gases. The "fluid" term refers to the fact that coke particles are in a continuous system versus older batch-coking technology.