Moldovan (also Moldavian; limba moldovenească, лимба молдовеняскэ) is one of the names of the Romanian language as spoken in the Republic of Moldova, where it is official.[1][2] The spoken language of Moldova is closer to the dialects of Romanian spoken in northeastern Romania, and the two countries share the same literary standard.[3] Written in Cyrillic,[4] Moldovan is also the name of one of three official languages of the breakaway Moldovan territory of Transnistria.[5]

The Constitution of Moldova (Title I, Article 13) states that the Moldovan language is the official language of the country. In the Declaration of Independence of Moldova, the state language is called Romanian.[6] The 1989 Language Law that proclaimed it the state language of Moldova, speaks in the preamble of a "Moldovan-Romanian linguistic identity". After political debate over the issue became inflamed again in the early 2000s, a group of Romanian linguists adopted a resolution stating that promotion of the notion of Moldovan language is an anti-scientific campaign.[7]

The term Moldavian is also used to refer collectively to the north-eastern varieties of spoken Romanian, spread approximately within the territory of the former Principality of Moldavia (now split between Moldova and Romania). The Moldavian variety is considered one of the five major spoken varieties of Romanian, all five being written identically. There is no particular linguistic break at the Prut River, the border between Romania and Moldova.

In Moldova's schools, the discipline about the state language is called "Romanian language", though former Moldovan president Vladimir Voronin asked for it to be changed into "Moldovan language".[8]

The standard alphabet is Latin (currently official in the Republic of Moldova). Before 1989, two versions of Cyrillic had been used: the Moldovan Cyrillic alphabet in 1924–1932 and 1938–89, and the historical Romanian Cyrillic alphabet until 1918. As of 2010[update], the former remains in use only in Transnistria.

The history of the Moldovan language refers to the historical evolution of the glottonym Moldavian/Moldovan in Moldova and beyond, which is closely tied to the region's political status, with long periods of rule by Russia and the Soviet Union influencing the language's name and (when Cyrillic script was in use) orthography. From a linguistic perspective, this term is an alternative name for the varieties of the Romanian language spoken in the Republic of Moldova (see History of the Romanian language).

Before 1918 and also after the union of Bessarabia with Romania, it was not obvious nor universally accepted that Moldovans and the Romanians formed a single ethnic group.[9] Missing out all the important moments in the creation of a pan-Romanian national consciousness, the Moldovan peasants referred to themselves and their language as "Moldovan" also in the period between the wars. This caused reactions from pan-Romanian nationalists.[10] The concept of the distinction of Moldovan from Romanian was explicitly stated only in the early 20th century, and accompanied the raising of national awareness among Moldovans, and the Soviet placing heavy emphasis on Moldavians vs Romanians as a reaction to this awareness.[11]

Major recent developments include the passing to a Latin script from Cyrillic in 1989 and several changes in the statutory name of the language used in Moldova. At one point of particular confusion about identity in the 1990s, all references to geography in the name of the language were dropped, and it was officially known simply as limba de stat - "the state language".

Reversion to Latin script, and beyond

In 1989, the contemporary Romanian version of the Latin alphabet was made the official script of the Moldavian SSR.

In the Declaration of Independence[15] of Moldova (27 August 1991), the official language was named "Romanian", but the 1994 constitution declared Moldovan the state language.

A 1996 attempt by Moldovan president Mircea Snegur to change the official language to "Romanian" was dismissed by the Moldovan Parliament as promoting "Romanian expansionism".

In 2003, a Moldovan-Romanian dictionary (Dicţionar Moldovenesc-Românesc (2003), by Vasile Stati) was published. The linguists of the Romanian Academy in Romania declared that all the Moldovan words are also Romanian words, although some of its contents are disputed as being Russian loanwords. In Moldova, the head of the Academy of Sciences' Institute of Linguistics, Ion Bărbuţă, described the dictionary as "an absurdity, serving political purposes". Stati, however, accused both of promoting "Romanian colonialism".

In October 2009, Vlad Filat, the new Prime Minister of Moldova, announced that he intends to propose changes in the Constitution regarding the name of the language, replacing "Moldovan" with "Romanian".[17]

There are, however, regional differences in the colloquial spoken language. The Moldovan dialect/variety is common in the Republic of Moldova, as well as in Chernivtsi Oblast and Budjak region of Ukraine, and in eight counties of Romania, territories that once made up the medieval Principality of Moldavia. The difference between the language spoken in Chişinău and Iaşi and the language spoken for example in Bucharest could be roughly compared to that between Standard British and Scottish or American English.[citation needed] Others have argued that these differences might be found within any linguistic territory.[citation needed] 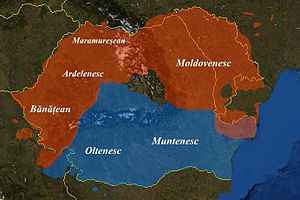 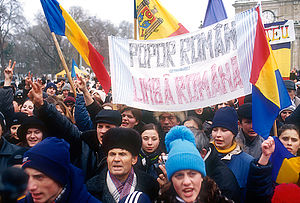 Demonstration in Chişinău, January 2002. The text on the inscription is "Romanian people -Romanian language"

The matter of whether or not "Moldovan" is a separate language is a contested political issue within and beyond the Republic of Moldova.

The 1989 Language Law of the Moldavian SSR, which is still in force in Moldova (according to the Constitution,[18]) asserts the existence of a "linguistic Moldo-Romanian identity".[19] Article 13 of the Moldovan Constitution, names it "the national language of the country" (the original uses the term limba de stat, which literally means the language of the state, or official language, thus avoiding the term national, whose sense is that of ethnicity).

In the breakaway region of Transnistria, it is co-official with Ukrainian and Russian.

Despite the official nomenclature, standard "Moldovan" is widely considered to be identical to the standard Romanian.[20] Writing about "essential differences", Vasile Stati, supporter of Moldovenism, is obliged to concentrate almost exclusively on lexical rather than grammatical differences. Whatever language distinctions may once have existed, these have been decreasing rather than increasing: "... in the main, Moldovan in its standard form was more Romanian by the 1980s than at any point in its history".[21]

In 2002, the Moldovan Minister of Justice, Ion Morei, said that Romanian and "Moldovan" are the same language and that the Constitution of Moldova should be amended, not necessarily by changing the word Moldovan into Romanian, but by adding that "Romanian and Moldovan are the same language".[22] Education Minister Valentin Beniuc said, "I have stated more than once that the notion of a Moldovan language and a Romanian language reflects the same linguistic phenomenon in essence."[23] The President of Moldova, Vladimir Voronin, acknowledged that the two languages are identical, but said that Moldovans should have the right to call their language "Moldovan".[24]

When reporting on EU Council deliberations regarding an agreement between the European Community and Moldova, the Romanian rapporteur Jean Marin Marinescu included a recommendation not to make references to the Moldovan language.[27] This led to speculation in the Romanian press that supposedly the EU banned the usage of the term "Moldovan language."[28] However, the European Commissioner for External Relations and European Neighbourhood Policy, Benita Ferrero-Waldner, denied these allegations and stated that the Moldovan language is referred to in the 1998 Cooperation Agreement between the EU and Moldova and hence it is considered a part of the acquis, binding to all member states.[29]

The language was generally written in a Romanian Cyrillic alphabet (based on the Old Church Slavonic alphabet) before the 19th century. From then and until World War I, both Old Cyrillic and Latin were used, at which point the Old Cyrillic alphabet fell out of use. In the interwar period, Soviet authorities in Transnistria (Moldavian Autonomous Soviet Socialist Republic) alternately used Latin or Cyrillic for writing the language, mirroring the political goals of the moment. Between 1940 and 1989, i.e. during the Soviet rule, the new Moldovan Cyrillic alphabet replaced Latin as the official alphabet in Moldova (then Moldavian SSR).[30] In 1989, Latin script was adopted in Moldova again, along with the orthographic rules used in Romania at the time, whilst officially Transnistria still uses the Cyrillic alphabet.[5]