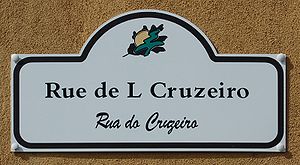 Street sign, at Genísio village, with the street name in Mirandese and in Portuguese

The Mirandese language (autonym: mirandés or lhéngua mirandesa; Portuguese: mirandês or língua mirandesa) is a Romance language belonging to the Astur-Leonese linguistic group, sparsely spoken in a small area of northeastern Portugal, in the municipalities of Miranda do Douro, Mogadouro and Vimioso. The Portuguese Parliament granted it co-official recognition (along with the Portuguese language) for local matters on 17 September 1998 with the law 7/99 of 29 January 1999.

Mirandese has a distinct phonology, morphology and syntax, and has been distinct at least since the formation of Portugal in the 12th century.[citation needed] It has its roots in the spoken Latin of the north of the Iberian Peninsula (Portuguese developed in the northwest). It is a descendant of the ancient Astur-Leonese language of northern Iberia, the last remnant of the ancient language of the Kingdom of León, and closely related to the modern Astur-Leonese languages in Spain. However, these amalgamations in the Spanish territory did not affect Mirandese, which preserves distinct linguistic differences in relation to both Portuguese and Spanish. It shares a great deal of lexicon with regional Portuguese dialects.

In the 19th century, José Leite de Vasconcelos, described it as "the language of the farms, of work, home, and love between the Mirandese". Since 1986/1987 the language has been taught to students between the age of 10 and 11, and the language is recovering.

The main differences between Mirandese in Portugal and the Astur-Leonese languages in Spain are caused by the dominant languages in each region. Mirandese has been influenced phonetically and in lexicon by Portuguese and the Astur-Leonese languages in Spain by Spanish (Castilian). All have distinctive orthography that phonetically reflects the respective main national languages. Another difference is that Mirandese and Leonese remain very conservative, while Asturian has undergone a greater amount of change.[citation needed]

A number of historical traits link Mirandese to Portuguese rather than Spanish:

The following is a sample text of the Mirandese language, written by Amadeu Ferreira, and published in the newspaper Público, on the 24th July 2007.

Then a comparison of the previous text in three modern languages of the Astur-leones group: 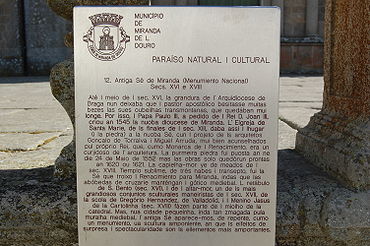 Public sign with the history of Miranda do Douro Cathedral written in Mirandese.

Mirandese, given its status as second official language in Portugal after Portuguese, has been the subject in recent years of some publicity and attention in other parts of Portugal. A monthly chronicle in Mirandese, by researcher and writer Amadeu Ferreira, appears in the daily Portuguese national newspaper Público. The first volume of the The Adventures of Asterix, named Asterix, L Goulés (Asterix the Gaul), was published in a Mirandese translation by Amadeu Ferreira in 2005, and sold throughout Portugal. Amadeu Ferreira also translated into Mirandese the epic poem by Camões, Os Lusíadas (Ls Lusíadas), under his pseudonym Francisco Niebro and published it in 2009.