Portuguese creoles are creole languages which have been significantly influenced by Portuguese.

Portuguese overseas exploration in the 15th and 16th century's led to the establishment of a Portuguese Empire with trading posts, forts and colonies in the Americas, Asia and Africa. Contact between the Portuguese language and native languages gave rise to many Portuguese-based pidgins, used as linguas francas throughout the Portuguese sphere of influence. In time, many of these pidgins were nativized becoming new stable creole languages.

As is the rule in most creoles, the lexicon of these languages can be traced to the parent languages, usually with predominance of Portuguese; while the grammar is mostly original and unique to each creole with little resemblance to the syntax of Portuguese or of other parent languages.

These creoles are (or were) spoken mostly by communities of descendants of Portuguese, natives, and sometimes other peoples from the Portuguese colonial empire.

Until recently creoles were considered "degenerate" languages unworthy of attention. As a consequence, there is little documentation on the details of their formation. Since the 20th century, increased study of creoles by linguists led to several theories being advanced. According to the monogenetic theory of pidgins, most of the pidgins and creoles the world derived from European languages actually descend from a single pidgin, the Mediterranean Lingua Franca, which was relexified by the Portuguese explorers and used by them throughout the empire. This theory was advanced to explain supposed similarities between all European-based creoles; such as the preposition na, meaning "in" and/or "on", which would come from the Portuguese contraction na meaning "in the" (feminine singular). However, the language bioprogram theory claimed that creole grammars are created by children from pidgins that have no grammatical structure; so the supposed similarities between creoles are a consequence of the unity of human innate linguistic abilities. However, some linguists, have dismissed those similarities as being due to residual influences of the parent languages.

The Portuguese word for "creole" is crioulo, which derives from the verb criar ("to raise", "to bring up") and a suffix -oulo of debated origin. Originally the word (like its Spanish equivalent criollo) was used to distinguish the members of any ethnic group who were born and raised in the colonies, from those who were born in their homeland. So in Africa it was often applied to locally-born people of (wholly or partly) Portuguese descent, as opposed to those born in Portugal; whereas in Brazil it was also used to distinguish locally born black people of African descent from those who had been brought from Africa as slaves.

In time, however, this generic sense was lost, and the word crioulo' or its derivatives (like "Creole" and its equivalents in other languages) became the name of several specific communities and their languages, such as the Cape Verdean people (and their language) and the Guinea-Bissau Kriol (and their language). In Brazil, on the other hand, crioulo became a term for "black", now considered highly offensive (like "nigger" in English).[citation needed] 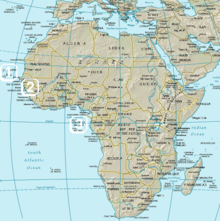 The oldest Portuguese-based creole are the so-called Crioulos of Upper Guinea, born around the Portuguese settlements along the northwest coast of Africa. Originally spoken on a wider area, they are presently reduced to the following branches:

Another group is spoken in the Gulf of Guinea, in São Tomé and Príncipe and Equatorial Guinea:

Many other Portuguese creoles probably existed in Africa, especially in the Congo region and former Portuguese feitorias in the Gulf of Guinea.

Portuguese Creoles are the mother tongue of Cape Verde (it also has a largest number of standard Portuguese speakers) and Guinea-Bissau's population.

Portuguese has contributed to many languages of the Americas, although its similarity with Spanish makes it difficult to separate the influence of the two languages. Most surviving creoles contain also influences from Dutch, English, French, and various African languages. They are:

Although sometimes classified as a Creole, the Cupópia language from the Quilombo do Cafundó, at Salto do Pirapora, SP[1] is better classified as a Portuguese variety since it is structurally similar to Portuguese, in spite of having a large number of Bantu words in its lexicon.

Portuguese-based creoles existed in Brazil. There is a Portuguese dialect in Helvécia, South of Bahia that presents signs of an earlier decreolization. Ancient Portuguese creoles originating from Africa are still preserved in the ritual songs of the Afro-Brazilian animist religions (Candomblé)[citation needed].

There are two French-based Caribbean creole languages spoken in Brazil, in the state of Amapá, Lanc-Patuá and Karipuna Creole, which were transplanted to the region in the 20th century. They are poorly known, but the Portuguese influence on them is small (chiefly in the vocabulary).

The numerous Portuguese outposts in India and Sri Lanka gave rise to many Portuguese-based creole languages, of which only a few have survived to the present. The largest group were the Norteiro languages, spoken by the Norteiro people, the Christian Indo-Portuguese in the North Konkan. Those communities were centered around Baçaim, modern Vasai, which was then called the “Northern Court of Portuguese India” (in opposition to the "Southern Court" at Goa). The creole languages spoken in Baçaim, Salsete, Thana, Chevai, Mahim, Tecelaria, Dadar, Parel, Cavel, Bandora (modern Bandra), Gorai, Morol, Andheri, Versova, Malvan, Manori, Mazagão, and Chaul are now extinct. The only surviving Norteiro creoles are:

These surviving Norteiro creoles have suffered drastic changes in the last decades. Standard Portuguese re-influenced the creole of Daman in the mid-20th century.

The Creoles of the Coast of Coromandel, such as of Meliapor, Madras, Tuticorin, Cuddalore, Karikal, Pondicheri, Tranquebar, Manapar, and Negapatam, were already extinct by the 19th century. Their speakers (mostly the people of mixed Portuguese-Indian ancestry, known locally as Topasses) switched to English after the British takeover.

Most of the creoles of the coast of Malabar, namely those of Cananor, Tellicherry, Mahé, Cochin (modern Kerala), and Quilom) had become extinct by the 19th century. In Cananor and Tellicherry, some elderly people still spoke some creole in the 1980s. The only creole that is still spoken (by a few Christian families only) is

Christians, even in Calcutta, used Portuguese until 1811. A Portuguese Creole was still spoken in the early 20th century. Portuguese creoles were spoken in Bengal, such as at Balasore, Pipli, Chandernagore, Chittagong, Midnapore and Hugli.

In the past, Portuguese creoles were also spoken in Burma and Bangladesh.

The earliest Portuguese creole in the region probably arose in the 16th century in Malacca, Malaysia, as well as in the Moluccas. After the takeover of those places by the Dutch in the 17th century, many creole-speaking slaves were taken to other places in Indonesia and South Africa, leading to several creoles that survived until recent times:

The Malacca creole also had an influence on the creole of Macau (see below).

The Portuguese were present in the island of Flores, Indonesia since the 16th century, mainly in Larantuka and Sikka; but the local creole language, if any, has not survived.

Other Portuguese-based creoles were once spoken in Thailand (In KudeeJeen and Conception) and Bayingy in Burma.

The Portuguese language was present in its colony, Macau, since the mid-16th century. A Portuguese creole, Patua, developed there, first by interaction with the local Cantonese people, and later modified by influx of refugees from the Dutch takeover of Portuguese colonies in Indonesia.