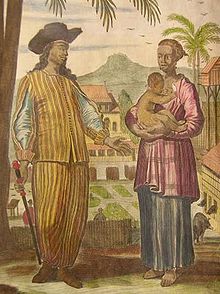 A Mardijker and his wife, detail, Churchill 1704.

The Mardijker were a community in amongst others Batavia (modern Jakarta), made up of descendants of freed slaves. They could be found at all major trading posts in the East Indies.[1] They were mostly Christian, of Indian and some Portuguese ancestry, and spoke a Portuguese patois. The Dutch also referred to them as inlandse Christenen ("indigenous Christians").

The ancestors of the Mardijkers had been slaves of the Spaniards and Portuguese in India, Africa and Malay Peninsula, and were brought to Indonesia by the Dutch, especially after the 1641 Dutch conquest of Malacca. There were also Mardijkers originated from Pampanga, Luzon which called by the Dutch as Papangers.[2]

The term Mardijker is a Dutch corruption of the Portuguese version of Sanskrit Maharddhika meaning "rich, prosperous and powerful". In the Malay archipelago, this term had acquired the meaning of a freed slave. The Dutch colonists also used it more generally to describe any freed slaves which were full-blood Asian, i.e. swarten ("black").

The Census of 1699 in Batavia shows the breakdown of the population as:

The Mardijkers mostly clung to their Catholic faith and continued to attend Batavia's Portuguese church, although many were eventually baptised by the Dutch Reformed Church. They were legally recognized by the Dutch East India Company as a separate ethnic group, and kept themselves apart from the native Javanese (Taylor 1983: 47; Bosma and Raben 2008: 46-47). During the VOC era there was already considerable inter-marriage with the Indos in pre-colonial history, who were often also of Portuguese descent. During the colonial era the Mardijkers eventually assimilated completely into the Indo Eurasian community and were no longer registered as a separate ethnic group.

Between the 18th and 19th centuries, the Mardijkers exchanged their original Portuguese-based creole for a Malay-based one, Betawi Malay (Omong Betawi). Nowadays they speak Indonesian, the Indonesian national language, and use Betawi Malay only in informal contexts. The old creole still survives in old song lyrics, in the genre Keroncong Moresco or Keroncong Tugu.

When the Indonesians fought for independence from the Dutch they used the slogan Merdeka ("freedom"), which has the same root with Mardijker.

The name 'Mardijkers' is also used for the so-called belanda hitam (Zwarte Hollanders "black Hollanders"), soldiers recruited in Ghana, Africa who served in the colonial army (KNIL) and gained their freedom afterward.