Bandra (Marathi: वांद्रे Vandre), is a suburb located in the north-west of Mumbai, India. It has earned the sobriquet "Queen Of The Suburbs". It is a railway station on the Western line of the Mumbai Suburban Railway. Bandra is a highly coveted location for restaurants, pubs, and high-street stores. It has several restaurants and shopping areas.

The population of Bandra is cosmopolitan in nature. It consists of a fair amount of Hindus, Muslims, Christians (Catholics and others), Parsis (Zorastrians) et al. Bandra is home to numerous churches, including Mount Mary's Basilica. The Parsi fire-temple, Tata Agiary is located on Hill Road. Other famous religious places include the Jama Masjid (mosque) located near Bandra West railway station and the temple of Goddess Jari-Mari, located on S.V Road. A municipal lake, Swami Vivekanand Talao, is located in Bandra. It was closed to the general public in the mid 1990s.

The suburb is also famous for its coastline, with promenades along Carter Road, Bandstand and Reclamation. Many Bollywood actors live along the Bandra Bandstand, Carter Road and in the Pali Hill areas.

The name 'Bandra' is possibly an adaptation of Bandar, the Persian word for Port. Many views exist on the origin and etymology behind the name of Bandra. One view states that it is derived from the name of a Portuguese princess. Another, more plausible one is that it is a corruption of the Persian word Bandar-gah. Bandar is a the word for a port in Iran. Vandre in Marathi and Bandar in Persian both mean port and are derived from the same root word in Sanskrit[citation needed]. The area was under rule the Silhara dynasty in the 12th century. It is referred to as "Bandora" on gravestones in the cemetery of St. Andrew's Church and in the writings of Mountstuart Elphinstone of the British East India Company which describe endeavours to acquire the island of Salsette.[citation needed]. 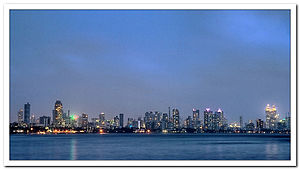 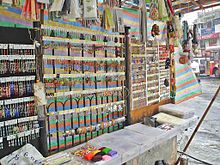 A stall on Linking Road

In 1543, the Portuguese took forced possession of the seven islands that made up Bombay. The Portuguese gave the sole ownership of Bandra, Parel, Wadala and Sion to Jesuit priests. In 1570, the Jesuits built a college and a church in Bandra by the name St Anne's (Santa Anna) College and Church. In the mid-18th century, the traveller John Fryer recorded that the Jesuit church, which stood near the sea shore, was still in use[citation needed].

In 1733, Kunbi farmers migrated to this island from Colaba because the fish manure they used was banned. They founded St. Andrew's church and St. Stanislaus's Orphanage.

Bandra remained a village with plantations of rice and vegetables in the low-lying areas of the island until getting connected to Mahim by a causeway in 1845. Many bungalows were built in the decades of the 1860s and 70s. The Pali Hill area, now inhabited mostly by members of the film community, saw the first constructions only in the 1880s.

R. D. National College was originally set up in 1922 in Hyderabad, Pakistan under the guidance of Annie Besant. After the partition of India, it was set up again, in 1949, in Bandra.

The lake was later acquired by the Municipal Corporation of Greater Mumbai. It was officially renamed Swami Vivekanand Sarovar. Paddle boating facilities and pisciculture activities were operational in this lake during the 1990s. This lake is now a heritage structure of status "Heritage II".[citation needed] 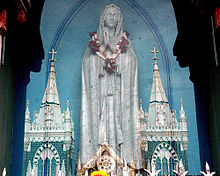 The chapel of Mount Mary, was built around 1640. Lore has it that the chapel was destroyed in 1738 during a raid by Marathas. The statue of the Virgin was recovered from the sea by fishermen and temporarily installed in St. Andrew's church, before being shifted to the rebuilt Mount Mary Church in 1761. To this day, the statue is venerated and many miracles, minor and major, are attributed to the Lady of the Mount. People of all faiths and communities visit the church, giving the place a syncretic nature. The Bandra Fair is held the duration of eight days of the Octave, (starting on the Sunday following September 8) during which pilgrims come from as far North as Vasai, Virar and as far East as Thane throng the church.[2][3]

The part of Bandra located on the western side of the railway line evolved into a fashionable suburb by the middle of the 20th century. Film director, Mehboob Khan, established Mehboob Studio here in 1954. Soon the area was abuzz with film-related activities. A recording studio was set up in the 1970s.[4][5]

The eastern, in the mid-to-late 1990s emerged as a commercial and administrative hub. It houses the Family Court, Bandra-Kurla Commercial Complex, the office of the state housing development authority (MHADA), the office of the District Collector and so on. The residential quarters of the employees of the Maharashtra State Government are also located here.

Bandra and the Sea Link 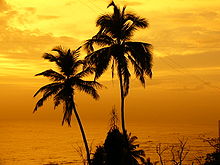 Most roads and places in Bandra possess English names that were given to them during the British rule. They have been renamed over time but many are still popularly known by their old names. 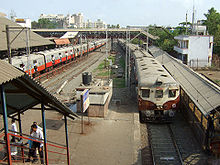 Public transport BEST buses, auto rickshaws and taxis are abundant. As you travel southwards, Bandra is the last point upto which auto rickshaws ply. Beyond Bandra, as you enter Mahim, only taxis are allowed to ply.

Due to Bandra's central location, most parts of the city are easily accessible. 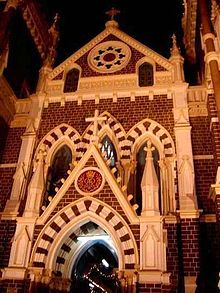 Despite commanding one of the highest property rates in Mumbai and being considered a most fashionable place to live in, Bandra has long suffered from problems of to over-crowding, traffic congestions, haphazard construction of buildings and illegal hawking. Parking space availability is a major problem. Hill Road, one of Bandra's major roads continues to be heavily congested due to illegal hawkers setting up shops on the road itself. Also, the prices of commodities is higher compared to the other suburbs. Demolition of old bungalows along the narrow bylanes for new high rises has resulted in Bandra losing its charm and becoming a display of unplanned constructions leading to a multitude of problems.