States and territories of India

States and territories of India

India is a federal union of states[1] comprising twenty-eight states and seven union territories. The states and territories are further subdivided into districts and so on.[1]

A clickable map of India exhibiting its 28 states and 7 union territories. 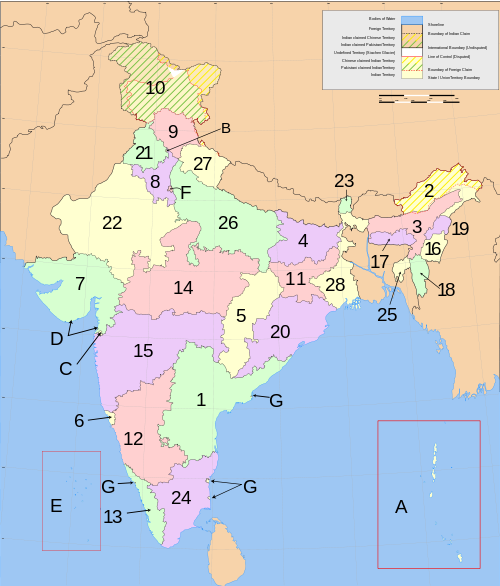 The Census 2011 codes given in the table have been assigned by Census India from North-West to South-East.

Responsibilities and authorities of the states compared to the national government

The subcontinent of India has been ruled by many different ethnic groups throughout its history, each imposing their own administrative divisions on the region.[citation needed]

The former French and Portuguese colonies in India were incorporated into the Republic as the union territories of Puducherry, Dadra and Nagar Haveli, Goa, Daman and Diu in 1962.

Several new states and union territories have been created out of existing states since 1956. Bombay State was split into the linguistic states of Gujarat and Maharashtra on 1 May 1960[4] by the Bombay Reorganization Act. Nagaland was made a state on 1 December 1963.[5] The Punjab Reorganization Act of 1966 divided the Punjab along linguistic lines, creating a new Hindi-speaking state of Haryana on 1 November,[6] transferring the northern districts of Punjab to Himachal Pradesh, and designating Chandigarh, the shared capital of Punjab and Haryana, a union territory.[citation needed]

Statehood was conferred upon Himachal Pradesh[7] on 25 January 1971, Manipur, Meghalaya and Tripura[8] on 21 January 1972 the Kingdom of Sikkim joined the Indian Union as a state on 26 April 1975.[9] In 1987, Arunachal Pradesh and Mizoram became states on 20 February, followed by Goa on 30 May, while Goa's northern exclaves of Daman and Diu became a separate union territory.[10]

Ahead of the 2009 General Elections in India, all the major parties in Andhra Pradesh supported statehood for Telangana. On 11:30 PM 9 December 2009, Mr. P. Chidambaram, Union Minister of Home Affairs, on behalf of the Government of India, announced that a resolution in the Andhra Pradesh assembly for the creation of a separate Telangana state would be passed. Mr. Chidambaram also stated that the process for the formation of a separate Telangana state would be initiated. It was not clear if this initiation of the process meant discussion with everyone involved on how to divide the state or whether the division of the state was being officially announced.

As a result of this unilateral decision by the Government of India, several members of Andhra Pradesh's legislature submitted their resignations to protest the creation of the new state owing to the pressure from the people in their constituencies.[11] As of 11 December, at least 117 legislators and many Members of Parliament had resigned in protest of the Government's decision to carve out a new state of Telangana.[12]

Due to the unexpected turn of events, after the parties which promised support to the Telangana state formation on 7 December 2009 in a unanimous all-party meeting at the State level, presided by CM, Rosaiah, and later the party members of these parties made a U-turn on their support bowing to the pressure from the people in their constituency following the 9 December statement (in support of Telangana state process initiation), the federal government made another statement on 23 December to clarify its intention on the process that it would consult with all groups, political and non-political, before moving forward. It then formed the Justice Sri Krishna committee which has been touring the state consulting with different sections of the society. A report recommending a solution suitable to all constituents is expected to be submitted before 31 December 2010.[13]

In November 2011 Mayawati, the chief minister of Uttar Pradesh, proposed dividing it into four states, Avadh Pradesh, Bundelkhand, Paschim Pradesh, and Purvanchal. On 21 November this movement was backed through a "voice vote" by the state assembly, despite criticism from the opposition and claims that the move was made to gain support for the next state election. It must gain the approval of the federal government, however this may be difficult due to the opposition to the creation of Telangana.[14]