Each province is administered by a governor, who is appointed by the Ministry of Internal Affairs. The only exception is Bangkok, whose governor is elected by its population.

Thailand is subdivided into 878 districts (amphoe, อำเภอ). The fifty districts of Bangkok are called khet (เขต), but even in official documents they are sometimes misidentified as amphoe. The number of districts in each provinces varies, from three in the smallest provinces to fifty in Bangkok. Further subdivision levels are tambon (subdistricts) and finally, muban (villages). In Bangkok the tambon are called khwaeng.

A clickable map of Thailand exhibiting its provinces. 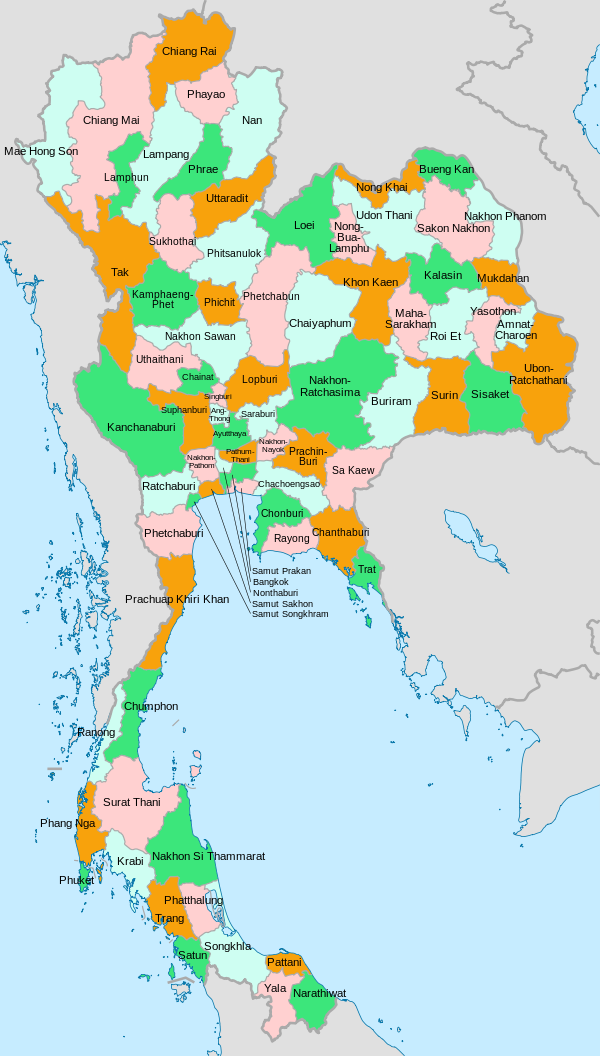 Many provinces date back to semi-independent local chiefdoms or kingdoms, which made up the Ayutthaya kingdom. As today, the provinces were created around a capital city (mueang), and included surrounding villages or satellite towns. The provinces were administered either by a governor, who was appointed by the king; or by a local ruling family, who were descendants of the old local kings and princes of that area and had been given this privilege by the central king. De facto the king did not have much choice but to choose someone from the local nobility or an economically strong man, as against these local power groups the administration would have become impossible. The governor wasn't paid by the king, but instead financed himself and his administration by imposing taxes by himself, thus effectively a kleptocracy. Every province was required to send an annual tribute to Bangkok.

The provinces were divided into four different classes. The first class were the border provinces. The second class were those that once had their own princely house. Third class were provinces that were created recently by splitting them from other provinces. Fourth class were provinces near the capital. Additionally tributary states like the principalities of Lannathai, the Laotian kingdoms of Vientiane and Luang Prabang, Cambodia, or the Malay sultanate Kedah were also part of the country, but with an even higher autonomy than the provinces. In this Mandala system the semi-independent countries sometimes were tributary to more than one country.

New provinces were created when the population of an area outgrew the administration, but also for political reasons if a governor became too dominant in a region former satellite cities were elevated to provincial status, as in the founding of the Maha Sarakham Province.

Reforms of the provincial administration started in the 1870s under increased pressure from the colonial states of the United Kingdom and France. Especially to the areas near the borders commissionaries were sent to have a stronger control on the provinces or tributary states.

At the end of the 19th century King Chulalongkorn reformed the central government drastically. In 1892 the ministry, which previously had many overlapping responsibilities, was reorganized with clear areas as in western administrations. Prince Damrong Rajanubhab became minister of the Ministry of the North (Mahatthai), originally responsible for the northern administration. When the Ministry of the South (Kalahom) was dissolved in 1894, Prince Damrong became Minister of the Interior, responsible for the provincial administration of the whole country.

Starting in 1893 the already existing commissionarships in some parts of the country were renamed to superintendent commissioner (khaluang thesaphiban), and their area of responsibility was called monthon. In strategically important areas the monthon were created first, while in other areas the provinces kept their independence a bit longer. Several smaller provinces were reduced in status to a Amphoe (district) or even lower to a tambon (subdistrict) and included in a neighboring province, sometimes for administrative reasons, but sometimes also to remove an uncooperative governor.

In some regions rebellions broke out against the new administrative system, usually induced by the local nobility fearing their loss of power. The most notable was the Holy Man rebellion in 1902 in Isan, which even though it was at first a messianic doomsday sect, it also attacked government representative in the North-East. The provincial town Khemarat was even burned by the rebels. After a few months the rebellion fought back.

After 1916 the word changwat became common to use for the provinces, partly to distinguish them from the provincial capital city (Mueang or Amphoe Mueang), but also to stress the new administrative structure of the provinces.[1]

When Prince Damrong resigned in 1915, the whole country was subdivided into 19 monthon (including the area around Bangkok, which was however under the responsibility of another ministry until 1922), with 72 provinces.

In December 1915 King Vajiravudh announced the creation of regions (phak), each administered by a viceroy (upparat), to cover several monthon. Until 1922 four regions were established, however in 1925 they were dissolved again. At the same time several monthon were merged, in an attempt to streamline the administration and reduce the costs.

The monthon were finally dissolved when Thailand transformed from an absolute monarchy into a constitutional monarchy in 1932, making the provinces the top level administrative division again. Several smaller provinces were also abolished at that time. During World War II, several provinces around Bangkok were merged together, which was however undone after the war. The current province of Sukhothai was at first known as Sawankhalok; it was renamed to Sukhothai in 1939 (which is why the railway system goes to Sawankhalok city and not Sukhothai city). Also the province Kalasin was reestablished in 1947, after being dissolved in 1932.

In 1972 the two provinces Phra Nakhon and Thonburi were merged to form the special administrative area of Bangkok, which combines the tasks of the provinces with that of a municipality, including having an elected governor.