พัทยา (help·info), RTGS: Phatthaya, Thai pronunciation: [pʰát.tʰā.jāː]) is a city in Thailand, located on the east coast of the Gulf of Thailand, about 165 km southeast of Bangkok located within but not part of Amphoe Bang Lamung (Banglamung) in the province of Chonburi.

The City of Pattaya (Thai: เมืองพัทยา; RTGS: Mueang Phatthaya) is a self governing municipal area which covers the whole tambon Nong Prue and Na Kluea and parts of Huai Yai and Nong Pla Lai. The City is situated in the heavily industrial Eastern Seaboard zone, along with Si Racha, Laem Chabang, and Chonburi. It has a population exceeding 100,000 (2007). Pattaya is also the center of the Pattaya-Chonburi Metropolitan Area, the conurbation in Chonburi Province, with a total population exceeding 1,000,000 (2010).

The name Pattaya evolved from the march of Phraya Tak (later King Taksin) and his army from Ayutthaya to Chanthaburi, which took place before the fall of the former capital to the Burmese invaders in 1767.

When his army arrived at the vicinity of what is now Pattaya, Phraya Tak encountered the troops of Nai Klom, who tried to intercept him. When the two leaders met face to face, Nai Klom was awed by Phraya Tak's dignified manner and his army's strict discipline. He then surrendered without a fight. The place the two armies confronted each other was called Thap Phraya, which means the Army of the Phraya. This was later changed to Phatthaya, which means the wind blowing from the southwest to the northeast at the beginning of the rainy season. Today the city is internationally known as "Pattaya" while the still correct and official transliteration "Phatthaya" is seen on many roadsigns.

For centuries, Pattaya was a small fishing village. But a change occurred on April 26, 1961, when the first group of about 100 American servicemen who were fighting in the Vietnam War arrived in Pattaya for relaxation. From this beginning, Pattaya became a popular beach resort which now attracts over 4 million visitors a year.[2][3] Fishermen's huts along the beach were replaced by resort hotels and retail stores, including Asia's largest beachfront shopping mall,[4] the CentralFestival Pattaya Beach Mall and hotel (Hilton) situated on Beach Rd in central Pattaya.

The city (Mueang) had 104,318 registered inhabitants in 2007. As with the Bangkok Metropolitan Region, that figure excludes the large number of people who work in the city but remain registered in their hometowns, and many long-term expatriate visitors. Including non-registered residents, the population numbers around 300,000 at any given time. Other estimates put the figure as high as 500,000.[1]

Most of the officially-registered Pattaya residents are of Thai-Chinese ancestry. Due to the tourist industry, many people from the Northeast (known as Isan, the poorest region of Thailand) have come to work in Pattaya, and are counted for census purposes in their hometown.

There is a fast-growing community of foreign retirees living in Pattaya. Thai immigration has a special visa category for foreigners over age 50 who wish to retire in Thailand. Pattaya is attractive to many retirees from Europe and other Western countries not only because of its climate and exotic, easy lifestyle, but also because living costs are a fraction of those in Europe, a major consideration for people on fixed pensions or incomes. 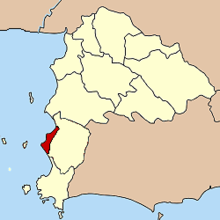 Pattaya, located off the Gulf of Thailand, is approximately 145 km south of the city of Bangkok, surrounded by Bang Lamung District.

"Greater Pattaya" occupies most of the coastline of Banglamung (one of the eleven districts that comprise Chonburi Province). It is divided into a larger northern section which spans the areas to the east of Naklua Beach (the most northern beach) and Pattaya Beach (the main beach) plus the Pratamnak Hill (often called "Buddha Hill" because of the temples on top of the hill) headland (immediately south of Pattaya Beach), and a smaller southern section covering the area to the east of Jomtien Beach (which lies directly south of Pratamnak Hill).

Pattaya has a tropical wet and dry climate, which is divided into the following seasons: warm and dry (November to February), hot and humid (March to May), and hot and rainy (June to October).

The Pattaya Bay Area is one of Asia's largest beach resorts and the second most visited city in Thailand, after Bangkok. This panorama overlooks Bali Hai pier and the core of the city.

The main sweep of the bay area is divided into two principal beachfronts. Pattaya Beach is parallel to city centre, and runs from Pattaya Nuea south to Walking Street. Along Beach Road are restaurants, shopping areas, and night attractions.
Jomtien Beach in the southern part of the bay area is divided from Pattaya beach by the promontory of Pratumnak Hill. It consists of high-rise condominiums, beachside hotels, bungalow complexes, shops, bars, and restaurants. On weekends, it becomes increasingly crowded, with many Thai visitors coming from Bangkok. It offers of watersport activities such as jet skis, parasailing and small sail boat hire.

Offshore islands include the "Near Islands", Ko Larn (main island), Ko Sak and Ko Krok located 7 km from the western shores of Pattaya Ko Larn, or "Coral Island", Mu Ko Phai, the "Far Islands", Ko Phai (main island), Ko Man Wichai, Ko Hu Chang and Ko Klung Badan, located offshore further west of the "Near Islands", and Ko Rin, located offshore to the southwest, south of Mu Ko Phai. Some of the islands in the group are accessible by speedboat in less than 15 minutes and by ferry taking about 45 minutes. The names "Near Islands", "Far Islands" and "Coral Island" are used for touristic purposes only and do not correspond to any naming conventions of the island groups and are not shown on maritime charts published by the Hydrographic Service of the Royal Thai Navy. Many of the islands have public beaches and offer scuba diving activities. 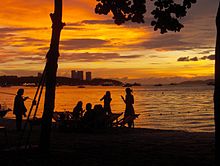 A daily service operates between Pattaya and Hualumphong Station in Bangkok.

Pattaya is served by frequent bus service from Bangkok’s Northern Bus Terminal (Morchit) and the Eastern Bus Terminal (Ekamai). Buses from a terminal on Sukhumvit Highway near Pattaya Klang connect Pattaya with many destination in the Northeast (Isan).
City and suburban services are mainly provided by Songthaew (public passenger pick-up vehicle), popularly nicknamed "baht-buses" or "taxis". A new bus service which connects Pattaya with Suvarnabhumi Airport is located on Tappraya Road near the intersection of Thepprasit Road. It uses modern air-conditioned buses, and takes around 1½ hours to reach the airport.

There are some metered taxis, and air-conditioned vans operate for private hire from some hotel car-parks. Popularly nicknamed ‘baht-buses’ in Pattaya, songthaews are the most popular mode of public transportation. The cost is 10 baht for any distance on a regular route, but much higher if asked to go to a designated destination. Motorbike taxis generally operate in the town and suburbs, and are mainly used by locals for short distances. Although taxis must carry meters by law they are, in reality, rarely used.

Pattaya is about 1½ hours, or 120 km by road from Suvarnabhumi Airport, the Bangkok international hub. By road, it is accessed from Sukhumvit Road and Motorway 7 from Bangkok. Pattaya is also served (very limited) through U-Tapao International Airport which is 45 minutes drive from the city. 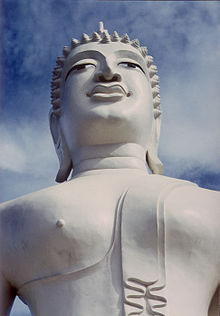 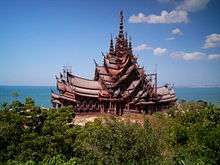 The Sanctuary of Truth. 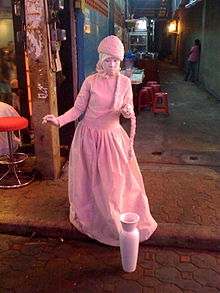 Once a fishing town, Pattaya first boomed as an R&R destination during the Vietnam War and developed into a family-orientated[citation needed] seaside destination. Foreign tourism to Thailand as a whole in 2007 amounted to 14.5 million visitors.[6]

Activities include playing golf (21 golf courses within 1 hour of Pattaya,) go-kart racing, and visiting different theme parks and zoos such as the Elephant Village, where demonstrations of training methods and ancient ceremonial re-enactments are performed daily. The private Sri Racha Tiger Zoo features tigers, alligators, and other animals in daily shows. The Vimantaitalay tourist submarine offers 30 minute trips underwater to see corals and marine life just a few kilometers offshore. Nong Nooch Tropical Botanical Garden about 15 kilometers south of Pattaya is a 500-acre (2.0 km2) site of botanical gardens and an orchid nursery where cultural shows with trained chimpanzees and elephants are presented.

Other attractions in Pattaya include The Million Years Stone Park, Pattaya Crocodile Farm, Pattaya Park Beach Resort Water Park, Funny Land Amusement Park, Siriporn Orchid Farm, Silverlake Winery, Underwater World Pattaya (world-class aquarium), the Thai Alangkarn Theater Pattaya (cultural show), Bottle Art Museum, Ripley's Believe It or Not Museum, and Underwater World, an aquarium where there is a collection of marine species in the Gulf of Thailand including sharks and stingrays. Khao Phra Tamnak or Khao Phra Bat is a small hill located between South Pattaya and Jomtien Beach that provides a panoramic view of the city of Pattaya and its crescent bay. The hill is topped by Wat Khao Phra Bat, a temple, and the monument of Kromluang Chomphonkhetudomsak, who is regarded as the “founding father of the modern Thai navy.”

The Sanctuary of Truth is a large wooden structure constructed in 1981 by the sea at Laem Ratchawet, that was conceived from the vision that human civilization has been achieved and nurtured by religious and philosophical truth.

Mini Siam is a miniature model village which celebrates the heritages of Thailand with replicas of the most famous monuments and historical sites including the Temple of the Emerald Buddha, Democracy Monument, Bridge over the River Kwai, and Prasat Hin Phimai. Models of the Tower Bridge of London, Eiffel Tower, the Statue of Liberty and Trevi Fountain are also displayed in the section called “mini world".

Wat Yanasangwararam Woramahawihan is a temple constructed in 1976 for Somdet Phra Yanasangwon, the present Supreme Patriarch and later supported by His Majesty the King. Within the compound of the temple are a replica of the Buddha’s footprint, and a large Chedi containing the relics of the Lord Buddha.

Besides these, Pattaya regularly stages other music events such as a dance party with world-renowned DJ Tiesto, held in February 2010.[19] The fourth Bangsaen Speedfestival, a street circuit race at Hat Bang Saen approximately 50 km north of Pattaya, was held on November 10–14, 2010.[20]

International creative arts include several art galleries. The center of the modern-art scene on the Eastern Seaboard is Liam’s Gallery, which features original artworks by Thai and Western artists.[21]

Pattaya Players, a troupe of amateur thespians, produces a variety of theatrical productions.

Pattaya has derived part of its reputation as a tourist destination due to the sex industry[22][23] and the resulting nightlife, and in many ways the city has become what it is now because of this.[24] Prostitution in Thailand is technically illegal but reality shows that it is tolerated as is the case for Pattaya[25] where it is found in certain areas with vast numbers of host bars, gogo bars, massage parlours, saunas, and hourly hotels, serving foreign tourists as well as locals. This is prevalent in the Walking Street as well as other areas around the city.[26] Efforts have of late been made to clean up the city's image.[27]

Pattaya also has Asia's largest gay scene[28] based around Boyztown and Sunee Plaza.

The city is also famous for its flamboyant kathoey cabaret shows where transsexuals and transvestites perform to packed houses.[29]

Driven by its popularity as both a holiday destination, and a location for foreign expatriates, Pattaya is an area of extensive property development, including hotels, condominiums, and housing estates. Steadily rising prices of land and buildings have also led to investment and speculation contributing to the growth in the town's economy. While foreigners are not permitted to own land, they are permitted to hold title to condominium units. Many new condominiums sell out the allotted 49% for foreigners while the buildings are being constructed.

Large hospitals in the area include Bangkok Pattaya Hospital, Pattaya International Hospital, Banglamung Hospital, and Pattaya Memorial Hospital. Many foreign tourists have dental and medical care in Pattaya, though Bangkok is far more popular as a medical tourist destination.