เชียงใหม่ (help·info)) is the second-largest province (changwat) of Thailand, located in the north of the country. Neighboring provinces are (from northeast clockwise) Chiang Rai, Lampang, Lamphun, Tak, and Mae Hong Son. In the north it borders Shan State of Burma. Chiang Mai recently started to position itself as a Creative City (Chiang Mai Creative City[1]) and is considering to apply to become a UNESCO Creative City.[2]

Chiang Mai province is about 700 km from Bangkok and is situated on the Mae Ping River basin and is 300 m above sea level. Surrounded by high mountain ranges, it covers an area of approximately 20,107 km². The district is covered by many mountains, chiefly stretching in the south-north direction. The river Ping, one of the major tributaries of the Chao Phraya River, originates in the Chiang Dao mountains. The highest mountain of Thailand, the 2,565 meter high Doi Inthanon, is located in the province. Several national parks are in the district: Doi Inthanon, Doi Suthep-Pui, Mae Ping, Sri Lanna, Huay Nam Dang, Mae Phang, Chiang Dao.

The mountainous terrain is mainly jungle, parts of which are within national parks which are still fertile and verdant with plentiful flora and fauna. There are many sites and locations where tourists prefer to visit to study the lifestyle of the tribal people who live on high hills. 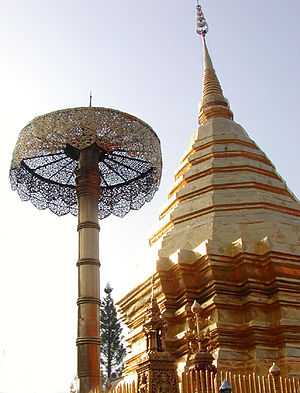 The city of Chiang Mai was capital of the Lanna Kingdom after its founding in 1296. During the same period of time as the establishment of the Sukhothai Kingdom. From then, Chiang Mai not only became the capital and cultural core of the Lanna Kingdom, it was also the centre of Buddhism in northern Thailand and King Meng Rai built innumerable temples.

In 1599 the kingdom lost its independence and became part of the Ayutthaya Kingdom. This ending the dynasty founded by King Meng Rai which had lasted for 300 years. The occupiers Burma, had a powerful Burmese influence on the architecture which can still be seen today. It was only in the late 18th century that Burma was finally defeated with the leadership of King Taksin.

In 1932 the province Chiang Mai became the second level subdivision of Thailand when the administrative unit of Monthon Phayap, the remains of the Lanna Kingdom, was dissolved.

13.4% of the population on the province are members of the hill tribes, among them the Hmong, Yao, Lahu, Lisu, Akha and Karen.

The seal of the province shows a white elephant in a glass pavilion. The white elephant is a royal symbol in Thailand, and it is depicted to remember the offering of a white elephant by King Rama II to the ruler of Chiang Mai. The pavilion symbolizes that Buddhism prospered in Chiang Mai, especially when in 1477 the teachings of Buddha, the Tripitaka, were reviewed.

The provincial flower and tree is the Flame of the Forest (Butea monosperma). The provincial slogan is In the shadow of Doi Suthep mount, blessed with rice customs and traditions, beautiful wild flowers, magnificent Nakhon Phing. 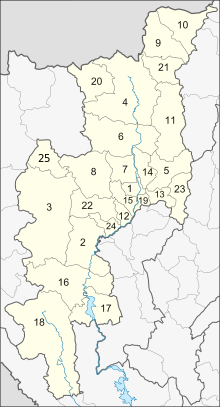 From November to February during the cool season, Chiang Mai province experiences pleasantly mild sunny weather with temperatures in the city area on average ranging between 15 Celsius at night and around 28 Celsius in daytime. At higher elevations, temperatures can sometimes dip down to freezing point at night. It doesn't snow, but sleet does occur at times.

During the hot season, lasting from March to May, temperatures especially in the city are high, rising into the high 30s.

The rainy season in the north is from June to October.

Car Chiang Mai is on Highway 11 (super highway Rd.). Cars can be hired in the provincial capital.

Train Chiang Mai is the terminal station on the northern railway route.

Songthaew Songthaews (passenger pick-up vehicles) are a common mode of transport in both rural and urban areas.

Samlor Samlors (rickshaws) can be found in the main areas.

Tuk-tuk Tuk-tuks are popular with both locals and tourists for short distances.

Bicycle & Motorbike Both forms of transport can be hired in the provincial capital.

Air Chiang Mai International Airport (CNX) is one of the seven international airports under the responsibility of the Airports of Thailand Public Company Limited (AOT). As Chiang Mai International Airport is the major gateway to the scenic beauty and rich culture of northern Thailand, it plays an important role in promoting travel and tourism throughout the northern region. Today, 14 airlines service the airport and more than 3,000,000 passengers, 15,000 flights and 16,000 tons of cargo are handled at this airport.

Chiang Mai province for years now has been the tourist hub of the north and one of Thailand's most important tourist destinations. .[citation needed]It is considered one of the most scenic provinces in the country due to its mountain ranges, valleys, flora and fauna. Unlike most of Thailand, the climate in the north and especially Chiang Mai is cool, fresh and misty.

Doi Suthep-Doi Pui National Park (อุทยานแห่งชาติดอยสุเทพ-ปุย) The park consists of forests and mountain ranges. Major mountains include Doi Suthep, Doi Buak Ha, and Doi Pui. This is a main source of tributaries and streams in Chiang Mai. Sacred places, religious attractions and historical sites are located in the park complex.

Chiang Mai Zoo (สวนสัตว์เชียงใหม่) is located next to Huai Kaeo Arboretum. It is a large zoo, which occupies the lower forested slopes of Doi Suthep Mountain. The zoo contains more than 200 types of Asian and African mammals and birds.

Doi Inthanon National Park (อุทยานแห่งชาติดอยอินทนนท์): at 2,565 m, Doi Inthanon is Thailand's highest mountain and one of the coolest peaks. Besides the actual mountain itself, there are a variety of other attractive locations such as Mae Ya, Wachirathan and Siriphum waterfalls and Bori Chinda Cave.

Pang Chang Mae Sa: The elephant shows are a demonstration of the elephants' abilities in log-hauling. After the end of the performance, visitors are able to have a go at riding an elephant.

Night Bazaar: Every evening the center of the provincial city holds one of the provinces biggest markets, selling a huge variety of goods to tourists, both foreign and Thai. The market is 3 blocks long and is surrounded by restaurants, cafes and travel agents.

Chiang Mai Night Safari: The world's third nocturnal zoo and is a government nature theme park which is built to promote Chiang Mai tourism regarding to the government's policy apart from arts, cultures, traditions, and the beauty of nature which are the main fascinating tourist attractions.

The city of Chiang Mai has a wide variety of activities.

Elephant Show The show begins with elephants bathing to cool themselves then mahouts would place a log harness on their backs. Finally, elephants will demonstrate their forestry skills. Elephant riding and rafting are the most popular activities. Some of the Elephant training centers are:

Mountain Biking Mountain biking is done on several routes in Chiang Mai including around the old city moats.

Homestay at Ban Mae Kampong The village is situated in a mountainous area with jungle surroundings. Nearby attractions include waterfalls, a cotton weaving village and the Huai Hong Khrai Royal Agricultural Station.

Hilltribes Trekking Of particular interest to most are the six major hilltribes which inhabit the Northern Highlands. The largest group is Karen, followed by the Meo, Lahu, Yao, Akha and Lisu. They share animism beliefs and honour numerous forest and guardian spirits. Each tribe has distinctive ceremonial attire, courtship rituals, games, dances, agricultural customs, languages or dialects, aesthetic values and hygienic habits.

Bamboo Rafting-Whitewater Rafting Bamboo Rafting along the Mae Taeng River (ล่องแพลำน้ำแม่แตง) is very popular because the river zigzags along the valleys. The river tide is not too rough and the surroundings on both sides are admirable.

Cruising along the Ping River Maenam Ping is the main river in Chiang Mai. While cruising, people can witness the atmosphere of Chiang Mai, as well as the local lifestyle on both sides of the Ping River.

Golf Courses Due to the pleasant natural surroundings and climate, Chiang Mai is popular for playing golf. There are many courses in the province.

Spa Spa treatment in Chiang Mai includes both traditional remedies and healing arts alongside modern techniques. This treatment, in terms of service available, has escalated over the past few years and there are now innumerable locations offering spa service – often including a Jacuzzi and steam bath.

Chiang Mai is the center of handicrafts with a variety of antiques, silver jewellery, and embroidery, Thai silks and cottons, basketry, celadon, silverware, furniture, lacquerware, woodcarvings and parasols. Major Chiang Mai products include:

For those who love nothing more than a decent night on the town, then Chiang Mai has one of the land's funkiest nightlife.[citation needed] Types of nightlife available include:

The north of Thailand's culture is Lanna in origin and the people are very proud of their northern roots. The region is home to distinctly different food, music, arts, way of life and even language. Chiang Mai is also a melting pot of hill tribes and their own unique cultures.

Traditional lifestyle of the hilltribes

Akha have the largest population of any hill tribe in the region. Originating from Tibet and Southern China, they dwell on high grounds around 1,200 meters above sea-level. Within their villages they build a Spirit Gateway to protect them from evil spirits.

Lahu are also from Southern China and live in high areas. They are known as hunters and planters.

Karen live in various areas of the region which have valleys and riverbanks.

Hmong from southern China are located on high land. They raise livestock and grow rice, corn, tobacco and cabbage. They are also known for their embroidery and silver.

Tai Lue live in dwellings of usually only a single room wooden house built on high poles. They are skilled in weaving.

Lisu from southern China and Tibet are renowned for their colorful dress and also build their dwellings on high poles. They harvest rice and corn and their men are skilled in hunting.

Yao reside along mountain sides and grow corn and other crops. They are skilled blacksmiths, silversmiths and embroiders. 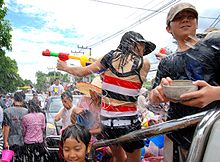 Doi Suthep Pilgrimage (งานประเพณีเดินขึ้นดอยสุเทพ) On the night of Visakha Bucha Day, worshippers gather to light candles and make the 7-kilometre pilgrimage up to the temple on Doi Suthep.

City Pillar Inthakin Festival (งานบูชาเสาอินทขิล) is held to invoke blessings of peace, happiness and prosperity for the city and its residents. Buddha images are paraded around the city. It is held at Wat Chedi Luang for 7 auspicious days and nights in the 7th lunar month.

Yi Peng Festival (งานประเพณียี่เป็ง) is held annually on Loy Krathong day (วันลอยกระทง). The festival features the release of lanterns into the sky to worship the gods. There are also fireworks, lantern contests, and beauty pageants.

Chiang Mai province is known as one of the world's top centers for the cottage industry. The area is popular for traditional handicrafts made by craftsmen using skills which have been down through countless generations. They include: silverware, lacquerware, celadon pottery, silk and cotton, hand-painted paper umbrellas and more.

Visitors to Chiang Mai have the opportunity to learn a variety of different Thai-style activities. These activities include Muay Thai (Thai Boxing), Thai cooking, Thai massage and Vipassana Meditation.

There are approximately 5,000 expatriates living in Chiang Mai making it one of the most popular destinations for retirement in Thailand. This is probably due to the cool climate, natural surroundings and lower cost of living. .[citation needed]