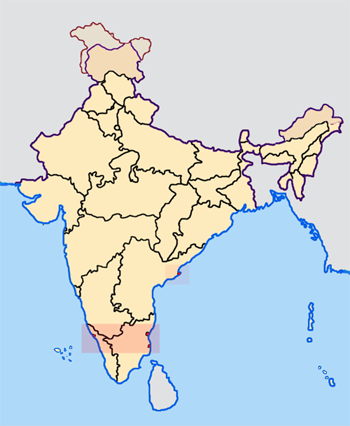 Puducherry (formerly audio|Pondicherry.ogg|Pondicherry; _ta. புதுச்சேரி or பாண்டிச்சேரி, _te. పాండిచెర్రి, _ml. പുതുശ്ശേരി, _fr. Pondichéry) is a of . It is a former French colony, consisting of four non-contiguous , or districts, and named for the largest, Pondicherry.

There is evidence of Romans visiting Pondicherry around 2500 years back. The Pondicherry Museum has Roman cups, jars and the coins traded in Pondicherry at that time.

A remarkable degree of French influence in Pondicherry exists to this date. Pondicherry was designed based on the French (however originally Dutch) grid pattern and features neat sectors and perpendicular streets. The entire town is divided into 2 sections, the French Quarter ('Ville Blanche' or 'White town') and the Indian quarter ('Ville Noire' or 'Black Town'). Many streets still retain their French names and French style villas are a common sight in Puducherry. In the French quarter, the buildings are typically with long compounds and stately walls. The Indian (Tamil) quarter consists of houses lined with verandas, and houses with large doors and grills. These French and Indian style houses are identified and its architecture is preserved from destruction by an organization named . If ever anyone wishes to demolish the existing house in the town area and rebuild, they need the permission from this organization and the new built house should resemble the same architectural beauty it possessed before destruction. The use of French language can be still seen in Pondicherry.

The history of French India holds in regard Joseph Francois Dupleix. The Statue of Dupleix in Pondicherry gives some idea about the immense contribution of the once Governor General in trying to consolidate French direction, at least in some parts of India. Dupleix can be held primarily responsible for the Carnatic Wars as a repercussion of the trouble between England and France in Europe. At first Joseph Dupleix was successful in resisting the attacks of the English East India Company, but he lost in the later battles.

The Statue of Dupleix is Pondicherry's tribute to the his contribution in the building of the city. Joseph Dupleix was the governor of Pondicherry and served the city. With the end of his governorship in 1754, the dream of France to become the supreme power in India also came to an untimely end. The Statue of Dupleix in Pondicherry was commissioned by France in 1870. Another statue was built in France and thus homage was paid to the French soldier who served France's interests in India.When The Statue of Dupleix of Pondicherry was first built, then this 2.88 m tall statue stood over six granite pillars, heavily decorated and curved, at the Place du Republique. Later on, the position of the statue was changed. Now, the statue of Dupleix stands in another place. When you walk in the promenade, now known as Goubert Avenue, then you will find this statue at its southern end, now overlooking a children's park.

=Official languages of government= IndiaCensusPop
title= Pondicherry population
1961= 369079
1971= 471707
1981= 604471
1991= 807785
2001= 973829
estimate=
estyear=
estref=
footnote= Source: Census of IndiaOfficial languages of Pondicherry are French, Tamil, Telugu and Malayalam. Status of each languages varies differently with respect to each district. When communicating between districts of different languages, generally English is used for convenienceFact|date=June 2007.

1.Tamil: Language used by the Pondicherry Government, especially when communicating within and between the Tamil majority districts of and along with issuing official decrees. Also the official language in state.

2.French: It is also the official language of Pondicherry Union territory. It was the of (1673-1954) and its official language status was preserved by (Treaty of Cession) signed by India and France on 28 May 1956.

It remained as the official language of Puducherry U.T by the "Article XXVIII" of Traité de Cession which states that,
* "Le français restera langue officielle des Établissements aussi longtemps que les représentants élus de la population n'auront pas pris une décision différente" (French version)
*"The French language shall remain the official language of the Establishments so long as the elected representatives of the people shall not decide otherwise" (English version)

According to Traité de cession dated 1956, the four former French colonies were assured of maintaining their special administrative status. That is why Pondicherry is the only Union Territory with some special provisions like Legislative Assembly, French as official language, etc.

The Article II of Traité de Cession states that,
* The Establishments will keep the benefit of the special administrative status which was in force prior to 1 November 1954. Any constitutional changes in this status which may be made subsequently shall be made after ascertaining the wishes of the people.

* Way back in 1787 and 1791, farmers of Karaikal agitated against the heavy land tax imposed by the French. The first war of Indian Independence had its impact in the French settlements but it did not attract the attention of the rulers, as the incidents were few and considered as local. People employed legal means to fight against the French. In 1873, an advocate, "Ponnuthammbi Pillai", moved to Paris court and won the case in which he was awarded a penalty by a French Magistrate in Pondicherry for walking into the court with footwear.

* (1709-1761), a "" and famous writer.
* Pondicherry was the setting for the first third of the Booker prize-winning novel "" by .
* 's novel "A house in Pondicherry" was likewise set there.
* In 's "", Prince Pondicherry has build him a castle made entirely of , which quickly melts.
* In The second novel, "" by , the family of a murder victim resides at Pondicherry Lodge.
* Some Novels of ,Mahe former employee of French Embassy and famous Malayalam Writer .

=Macro-economic trend= This is a chart of trend of gross state domestic product of Puducherry at market prices [http://mospi.nic.in/mospi_nad_main.htm estimated] by "Ministry of Statistics and Programme Implementation" with figures in millions of Indian Rupees.

* [http://pondicherry.nic.in/ Official website of the Government of the Union Territory of Pondicherry]
* [http://www.links.jstor.org/sici?sici=0362-8949(19500322)19%3A6%3C62%3ATFOFI%3E2.0.CO%3B2-%23 Future of French India, by Russel H. Fifield (Associate Professor of Political Science at University of Michigan]
* [http://www.pon.nic.in/open/regions/pondy/origin.htm Pondicherry - its Early Origins]
* [http://pib.nic.in/feature/feyr98/fe0898/f1808986.html Freedom struggle in Pondicherry]
* [http://meaindia.nic.in/treatiesagreement/1956/chap133.htm Indian Ministry for External Affaires - 1956 Treaty of Cession]
* [http://asi.nic.in/index3.asp?sublink2id=24 Exploration Off Arikamedu by Archaeological Survey of India]
* [http://pondycentralexcise.gov.in/ Commissioner of Central Excise and Service Tax, Pondicherry, falling under Ministry of Finance of Government of India]