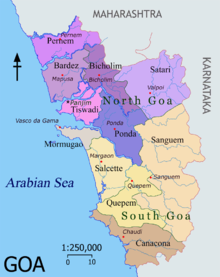 The divisions of a district. Goa is a state divided into two districts. Each district is further divided into several talukas.

A district (Hindi: ज़िला Zilā) is an administrative division of an Indian state or territory. Districts are further subdivided, in some cases into Sub-Divisions, and otherwise directly into tehsils or talukas.

Each of these officials is aided by officers of the appropriate branches of state government.

The majority of districts are named after their administrative center. Some are referred to by two names, a traditional one and one that uses the name of the town that is the headquarters. Since most of the districts are named after a town, the word "district" or "District" is appended to distinguish between the town and the district. Official websites very often use District with a capital D in this context.

The names of the 640 districts are mostly unique. There are some exceptions:

Note: Chandigarh is the capital of two states and 1 Union territory.