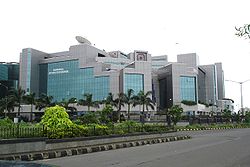 The National Stock Exchange (NSE) (Hindi: राष्ट्रीय शेअर बाज़ार Rashtriya Śhare Bāzaār) is a stock exchange located at Mumbai, Maharashtra, India. It is the 9th largest stock exchange in the world by market capitalization and largest in India by daily turnover and number of trades, for both equities and derivative trading.[2] NSE has a market capitalization of around US$1.59 trillion and over 1,552 listings as of December 2010.[3] Though a number of other exchanges exist, NSE and the Bombay Stock Exchange are the two most significant stock exchanges in India, and between them are responsible for the vast majority of share transactions. The NSE's key index is the S&P CNX Nifty, known as the NSE NIFTY (National Stock Exchange Fifty), an index of fifty major stocks weighted by market capitalisation.

NSE is mutually-owned by a set of leading financial institutions, banks, insurance companies and other financial intermediaries in India but its ownership and management operate as separate entities.[4] There are at least 2 foreign investors NYSE Euronext and Goldman Sachs who have taken a stake in the NSE.[5] As of 2006[update], the NSE VSAT terminals, 2799 in total, cover more than 1500 cities across India.[6] NSE is the third largest Stock Exchange in the world in terms of the number of trades in equities.[7] It is the second fastest growing stock exchange in the world with a recorded growth of 16.6%.[8]

The National Stock Exchange of India was promoted by leading Financial institutions at the behest of the Government of India, and was incorporated in November 1992 as a tax-paying company. In April 1993, it was recognized as a stock exchange under the Securities Contracts (Regulation) Act, 1956. NSE commenced operations in the Wholesale Debt Market (WDM) segment in June 1994. The Capital market (Equities) segment of the NSE commenced operations in November 1994, while operations in the Derivatives segment commenced in June 2000.

Currently, NSE has the following major segments of the capital market:

NSE became the first stock exchange to get approval for Interest rate futures as recommended by SEBI-RBI committee, on 31 August 2009, a futures contract based on 7% 10 Year GOI bond (NOTIONAL) was launched with quarterly maturities.[10]

There were System Testing going on and opinions, suggestions or feedback on the New Proposed Timings are being invited from the brokers across India. And finally on 18 November 2009 regulator decided to drop their ambitious goal of longest Asia Trading Hours due to strong opposition from its members.

However, on 17 December 2009, after strong protests from brokers, the Exchange decided to postpone the change in trading hours till 4 Jan 2010. 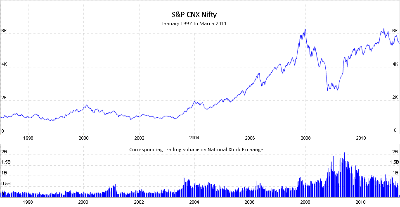 NSE has a number of exchange traded funds. These are typically index funds and GOLD ETFs. Some of the popular ETF's available for trading on NSE are:

NSE also conducts online examination and awards certification, under its programmes of NSE's Certification in Financial Markets (NCFM)[1]. Currently, certifications are available in 19 modules, covering different sectors of financial and capital markets. Branches of the NSE are located throughout India. NSE, in collaboration with reputed colleges and institutes in India, has been offering a short-term course called NSE Certified Capital Market Professional (NCCMP) since August 2009, in the campuses of the respective colleges/ institutes.[14]