On 1 August 2010, ASX launched a new brand and group structure. ASX Group became the overarching name, replacing Australian Securities Exchange, which remains as the name of the listings and trading arm of the ASX Group.

ASX functions as a market operator, clearing house and payments system facilitator. It oversees compliance with its operating rules, promotes standards of corporate governance among Australia’s listed companies.[2] It has a role in the education of retail investors, providing educational materials relating to its products including free online courses.[3]

The biggest stocks traded on the ASX, in terms of their market capitalisation, include BHP Billiton, Commonwealth Bank of Australia, Westpac, Telstra Corporation, Rio Tinto, National Australia Bank and Australia and New Zealand Banking Group. As at March 2010 the three largest sectors by market capitalisation were financial (36%), metal and mining (22%) and consumer (13%).[5]

The major market index is the S&P/ASX 200, an index made up of the top 200 shares in the ASX. This supplanted the previously significant All Ordinaries index, which still runs parallel to the S&P ASX 200. Both are commonly quoted together. Other indices for the bigger stocks are the S&P/ASX 100 and S&P/ASX 50.

ASX Group can be described as a multi-asset class and vertically integrated exchange group. Its activities include primary and secondary market services, including the raising, allocation and hedging of capital flows, trading and price discovery (Australian Securities Exchange); central counterparty risk transfer (via subsidiaries of ASX Clearing Corporation); and securities settlement for both the equities and fixed income markets (via subsidiaries of ASX Settlement Corporation).[7]

ASX operates two trading, clearing and settlement platforms, one for equity and related equity derivative products traded on an integrated trading platform between the hours of 10:00am and 4:00pm (AEST); and one for a suite of interest rate, equity index and commodity futures (and options on futures) products as well as Contracts For Difference (CFD), traded on a globally distributed 24 hour platform.

Monitoring and enforcement of compliance with its operating rules is performed by its wholly owned subsidiary, ASX Compliance.[8]

Operations of the ASX Group are regulated by the Australian Securities and Investments Commission (ASIC) which regulates all trading venues and clearing and settlement facilities, and supervises ASX’s own compliance as a listed public company. The Reserve Bank of Australia (RBA) also provides oversight in relation to compliance with financial stability standards for ASX’s central counterparties and securities settlement facilities.

ASX has a pre-market session from 07:00am to 10:00am AEST and a normal trading session from 10:00am to 04:00pm AEST. The market opens alphabetically in single-price auctions, phased over the first ten minutes, with a small random time built in to prevent exact prediction of the first trades. There is also a single-price auction between 4:10pm and 4:12pm to set the daily closing prices.[9] As of 30 October 2010, 2,192 stocks were listed on the ASX with a total market capitalisation of A$1.4 trillion (US$1.4 trillion). As of 30 October 2010 it was the 6th largest world equity market (on free float basis), comprising around 3.4% of the S&P BMI and 3.2% of the MSCI World index. Average daily turnover during 2010 was $5.5Abn.[10] 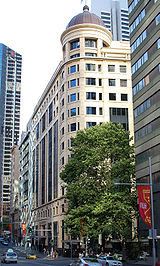 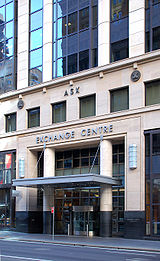 The first interstate conference was held in 1903 at Melbourne Cup time. The exchanges then met on an informal basis until 1937 when the Australian Associated Stock Exchanges (AASE) was established, with representatives from each exchange. Over time the AASE established uniform listing rules, broker rules, and commission rates.

Trading was conducted by a call system, where an exchange employee called the names of each company and brokers bid or offered on each. In the 1960s this changed to a post system. Exchange employees called "chalkies" wrote bids and offers in chalk on blackboards continuously, and recorded transactions made.[12]

The ASX (Australian Stock Exchange Limited) was formed in 1987 by legislation of the Australian Parliament which enabled the amalgamation of six independent stock exchanges that formerly operated in the state capital cities. After demutualisation the ASX was the first exchange in the world to have its shares quoted on its own market. The ASX was listed on 14 October 1998.[13] On 7 July 2006 the Australian Stock Exchange merged with SFE Corporation, holding company for the Sydney Futures Exchange.

1969–1970: The Poseidon bubble (a mining boom triggered by a nickel discovery in Western Australia) caused Australian mining shares to soar and then crash, prompting regulatory recommendations that ultimately led to Australia's national companies and securities legislation.

1984: Brokers' commission rates were deregulated. Commissions have gradually fallen ever since, with rates today as low as 0.12% or 0.05% from discount internet-based brokers.

1987: Following work begun in 1985, the separate exchanges merged to form the ASX. Also in 1987, the all-electronic SEATS trading system (below) was introduced. It started on just a limited range of stocks; progressively all stocks were moved to it and the trading floors were closed in 1990.

1990: A warrants market was established.

1993: Fixed-interest securities were added (see Interest rate market below). Also in 1993, the FAST system of accelerated settlement was established, and the following year the CHESS system (see Settlement below) was introduced, superseding FAST.

1994: The Sydney Futures Exchange announced trading in futures over individual ASX stocks. The ASX responded with the Low Exercise Price Option or LEPO (see below). The SFE went to court,[14][15] claiming that LEPOs were futures and therefore that the ASX could not offer them. However, the court held they were options and so LEPOs were introduced in 1995.

1995: Stamp duty on share transactions was halved from 0.3% to 0.15%. The ASX had agreed with the Queensland State Government to locate staff in Brisbane in exchange for the stamp duty reduction there, and the other states followed suit so as not to lose brokerage business to Queensland. In 2000 stamp duty was abolished in all states as part of the introduction of the GST.

1996: The exchange members (brokers etc.) voted to demutualise. The exchange was incorporated as ASX Limited and in 1998 the company was listed on the ASX itself, with the Australian Securities and Investments Commission enforcing the listing rules for ASX Limited.

1997: A phased transition to the electronic CLICK system for derivatives began.

2001: Stamp duty on marketable securities was abolished. 2006: The ASX announced a merger with the Sydney Futures Exchange, the primary derivatives exchange in Australia.

2010: The ASX announced a merger with Singapore Exchange.

2011: Treasurer Wayne Swan finds the proposed merger with the Singapore Stock Exchange to not be in the best interests of Australia and refuses to grant permission for the merger.

As at 29 November 2010, all ASX Equity products are screen traded on a platform called ASX Trade. ASX Trade is a NASDAQ OMX ultra-low latency trading platform based on NASDAQ OMX's Genium INET system. Many exchages around the world use a trading platform supplied by NASDAQ OMX.[16]

Investors hold shares in one of two forms. Both operate as uncertificated holdings (rather than through the issue of physical share certificates):

Holdings may be moved from issuer-sponsored to CHESS or between different brokers by electronic message initiated by the controlling participant.

Short selling of shares is permitted on the ASX, but only among designated stocks and with certain conditions:

Many brokers do not offer short selling to small private investors. LEPOs (below) can serve as an equivalent, while contracts for difference (CFDs) offered by third-party providers are another alternative.

In September 2008, ASIC suspended nearly all forms of short selling due to concerns about market stability in the ongoing global financial crisis.[18][19] The ban on covered short selling was lifted in May 2009.[20]

Further to this - the biggest change in this space for ASX in the last 15 years was the introduction of Settlement Rule 10.11.12. If you cannot provide stocks when settlement is due, ASX forces your clearer to go into the market and cover themselves.

ASTC Settlement Rule 10.11.12 requires that if a Failed Settlement Shortfall exists on the second Business Day after the day on which the Rescheduled Batch Instruction was originally scheduled for settlement (that is, generally on T+5), the delivering Settlement Participant must either:

Options on leading shares are traded on the ASX, with standardised sets of strike prices and expiry dates. Liquidity is provided by market makers who are required to provide quotes. Each market maker is assigned two or more stocks. A stock can have more than one market maker, and they compete with one another. A market maker may choose one or both of:

In both cases there is a minimum quantity (5 or 10 contracts depending on the shares) and a maximum spread permitted.

Due to the higher risks in options, brokers must check clients' suitability before allowing them to trade options. Clients may both take (i.e. buy) and write (i.e. sell) options. For written positions, the client must put up margin.

The ASX interest rate market is the set of corporate bonds, floating rate notes, and bond-like preference shares listed on the exchange. These securities are traded and settled in the same way as ordinary shares, but the ASX provides information such as their maturity, effective interest rate, etc., to aid comparison.

The Sydney Futures Exchange (SFE) – now a part of the ASX – was the 10th largest derivatives exchange in the world, providing derivatives in interest rates, equities, currencies and commodities. It provided futures and options on the four most actively traded markets - interest rates, equities, currencies and commodities including wool and cattle. Its most active products are:[clarification needed]

The ASX trades futures over the ASX 50, ASX 200 and ASX property indexes, and over grain, electricity and wool. Options over grain futures are also traded.

The ASX maintains stock indexes concerning stocks traded on the exchange in conjunction with Standard & Poor's. There is a hierarchy of index groups called the S&P/ASX 20, S&P/ASX 50, S&P/ASX 100, S&P/ASX 200 and S&P/ASX 300, notionally containing the 20, 50, 100, 200 and 300 largest companies listed on the exchange, subject to some qualifications.

Gain market experience with a 'virtual' share portfolio using real market prices. ASX runs Schools and Public Games. Hypothetically invest $50,000 in the stock exchange. Players buy and sell shares at current market prices and track the progress of their investments over the duration of the game.[22]

ASX retained responsibility for ensuring participants admitted to its market comply with its operating rules. The new arrangements did not change ASX’s existing oversight of listed entities or the obligations on ASX’s clearing and settlement facility operators.

ASX retained a subsidiary company to fulfil the obligations of each of the licensed entities in the ASX Group to monitor and enforce compliance with the ASX operating rules after the transfer. The name of the subsidiary was changed to ASX Compliance, as the previous name - ASX Markets Supervision - no longer properly described the subsidiary’s role within the ASX Group or ASX’s ongoing obligations.

ASX was (25 October 2010) in merger talks with Singapore Exchange (SGX). The merger would have created a bourse with a market value of US$14 billion.[23]

The merger was blocked by the Australian Federal Treasurer on 8 April 2011. [24]