Westpac
This article is about the bank. For the defunct airline, see Western Pacific Airlines.

Westpac (a portmanteau of "Western-Pacific", registered as Westpac Banking Corporation, ASX: WBC, NZX: WBC), is a multinational financial services, one of the Australian "big four" banks and the second-largest bank in New Zealand.

Westpac was recognised by the Dow Jones Sustainability Index as the most sustainable bank in the world for five years running, until ANZ who shared the title in 2007 was solely awarded in 2008.[4]

Westpac's core business consists of nine business units (five customer facing) through which it serves around 8.2 million customers. These business areas are:

This includes deposit taking, transaction accounts, credit cards, mortgages, and other lending. Westpac is a major home loan provider and also serves the financial needs of business customers with a turnover of up to $20 million. Investment, superannuation and general and life insurance products are also sold through the branch network. In the past, RBB operated as Consumer Financial Services. The name was changed when all retail products were combined into the one division.

St.George was founded in 1937 as a housing-based financial institution, becoming Australia's largest building society before achieving full banking status in July 1992. Westpac merged with St.George on 1 December 2008, but has pledged to keep the branch network for a minimum of 3 years and to maintain a corporate presence in the Sydney suburb of Kogarah.

BankSA is the largest financial institution in South Australia, and the State's main provider of housing, personal finance and rural banking services. It also provides funds management, life and general insurance, and superannuation and investment services. Westpac acquired BankSA in December 2008. It continues to be a division of St.George Bank.

Westpac acquired RAMS home loans in January 2008 and operates the RAMS distribution business and brands as part of the St.George group.

In 1861 the Bank of New South Wales opened seven branches in New Zealand. Some of the old buildings still stand, including one in Oamaru and another in Tokomaru Bay. Today this unit offers a whole range of consumer and corporate services to clients throughout New Zealand. It is the dominant provider of banking services to small to medium business, corporate and institutional organisations, and is the banker of the New Zealand government.[5] Currently Westpac is the second largest bank in New Zealand, after the merger of ANZ and National Bank of New Zealand, with around 1.5 million customers, 3,000 shareholders and 197 branches nationwide.

On 29 September 2006 Westpac was forced to pay NZ$5.1 million by the New Zealand Commerce Commission over hidden foreign transaction fees; most of the fine is reimbursement to affected customers, in the order of 12% of the fees actually charged. All other banks operating in New Zealand have either already been fined or are awaiting a court case.[6]

Business Technology Solutions and Services (BTSS) was Westpac's technology and services arm. It incorporates Westpac's internal IT business units, transformation teams, the bank's operations centres and other support services. These teams have moved to either Product & Operations, Retail and Business Banking, Corporate or to the newly created division "Westpac Technology"

Servicing the group, the three remaining business units are Group Finance, Human Resources and Group Risk. These are sometimes collectively referred to as the 'Corporate Core'.

Westpac is a member of the Global ATM Alliance, a joint venture of several major international banks that allows customers of the banks to use their ATM card or check card at another bank within the Global ATM Alliance with no fees when traveling internationally. Other participating banks are Barclays (United Kingdom), Bank of America (United States), BNP Paribas (France), Ukrsibbank (Ukraine), China Construction Bank (China), Deutsche Bank (Germany), Grupo Santander (Spain) and Scotiabank (Canada).[8] 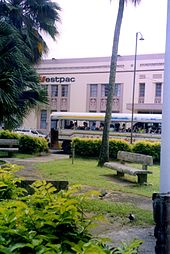 This unit of both the Australian and New Zealand Bank offers banking facilities to those migrating to either New Zealand or Australia. Bank accounts for migrants can be opened before people arrive in the country using their easy account opening process. Credit cards and mortgages can even be approved before arrival. Westpac Migrant Banking has a representative office in London where accounts can be arranged, although the process can be done remotely from any country. Westpac plans to open a retail branch in London in 2011.[9]

Westpac operates in seven south Pacific nations; the unit is headquartered in Sydney, Australia. The financial services offered include electronic banking (via online banking, ATMs and EFTPOS), deposit, loan, transaction accounts and international trade facilities to personal and business customers. Westpac Fiji is Westpac's Fijian operation. It is one of the largest banks in the country and has a 40% market share. 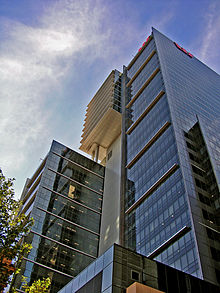 In December 2009, Westpac raised its rates on variable mortgages by 0.45%, more than the Reserve Bank's official rate rise of 0.25%.[13] Westpac justified the move on increased costs of funding, using an analogy with the price of bananas to explain the reasons to its customers.[14] The move drew considerable criticism, with the Prime Minister Kevin Rudd suggesting the bank should take "a long hard look at itself",[15] and other major banks such as NAB, who raised rates in line with the Reserve Bank, attacking Westpac for its move.[16]

In January 2008 and 2009 Westpac secured US$1.09 billion from the Federal Reserve in secret dealings without the knowledge of the public or the Australian government. It is believed that if the Federal Reserve did not bailout out the bank, then the bank would have been bailed out by the Reserve Bank of Australia.[17][18]

Westpac has been described as one of the world's most socially responsible banks, and in 2002 released a Social Impact Report that outlined the bank's plan to meet the highest international standards in the area of corporate social responsibility. This led to Westpac being assessed as the global sustainability leader for the banking sector in the Dow Jones Sustainability Index from 2004–2007.[19]