The Australia and New Zealand Banking Group Limited (ASX: ANZ, NZX: ANZ), commonly called ANZ, is the fourth largest bank in Australia, after the Commonwealth Bank, Westpac Banking Corporation and the National Australia Bank. Australian operations make up the largest part of ANZ's business, with commercial and retail banking dominating. ANZ is also the largest bank in New Zealand, where the legal entity became known as ANZ National Bank Limited in 2004 and where it operates two brands, ANZ and the National Bank of New Zealand.

In addition to operations throughout Australia and New Zealand, ANZ also extends to twenty-five other nations.[1]

ANZ was named the most sustainable bank globally in the 2008 Dow Jones Sustainability Index making it the 2nd year in a row ANZ has been granted the title. In 2007 the title was shared with another Australian bank, Westpac, which had held the title for the previous five years.[2] 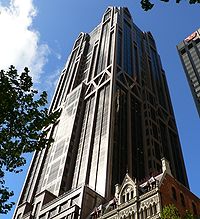 ANZ World Headquarters. Designed by Peddle Thorp Architects, the building is affectionately known as Gothic Tower due to its architecture. Queen Street, Melbourne.

ANZ is one of the leading Australian banks in the Asia-Pacific region. It has been aggressive in its expansion into the emerging markets of China, Vietnam and Indonesia. ANZ is also a leading bank in New Zealand as well as several Pacific Island Nation where it competes in many markets with fellow Australian bank, Westpac. ANZ's arm in New Zealand is operated through a subsidiary company ANZ National Bank.

In March 2005, it formed a strategic alliance with Vietnam's Sacombank involving an acquisition of 10% of Sacombank’s share capital. As part of the strategic alliance, ANZ will provide technical assistance in the areas of risk management and retail and small business banking.

In August, ANZ purchased RBS's retail units in Taiwan, Singapore, Indonesia and Hong Kong, as well as RBS's institutional banking businesses in Taiwan, the Philippines and Vietnam. It was purchased for the price of A$687 million.

ANZ have been progressively increasing work output from offshore offices. ANZ's Bangalore office has been operational since 1989, making it one of the first organisations to employ IT staff based in India. ANZ employs around 4,800 staff in Bangalore, India.[10] 1500 IT positions, 2000 positions in Payments and Institutional Operations and International and High Value Services and 1300 positions in Operations Personal Banking have been shifted from Melbourne to India. In 2006, ANZ predicted that by 2010, over 2000 jobs would have been shifted from Australia to Bangalore.[11]

In 2005 an advertisement included two famous robots: Lost in Space robot, and a Dalek from Doctor Who, although the Dalek was replaced in subsequent versions of the ad.

In 2006 the company started a TV campaign with a series of ads featuring their new mascot - the Falcon, a bird trained to stop credit card thieves, illustrating the company's measures in prevention of Credit card fraud. 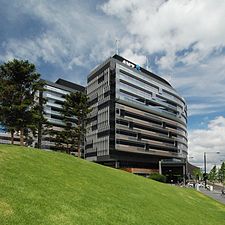 The headquarters in the Melbourne Docklands, inaugurated 2009

Currently, the company is running an ad campaign parodying common banking scenarios with a fictional character known as 'Barbara who lives in Bank World', a middle-aged, rude, sarcastic and unhelpful bank manager. The adverts have received acclaim for wit and humour, but also criticism for stereotyping bank managers. Barbara is portrayed by Australian comedian Genevieve Morris.[12]

In September 2006, plans were unveiled for ANZ's new world headquarters to be located in Melbourne's Docklands precinct. The complex features a vast low rise office building, shops, car and bicycle parking facilities. The new complex will enable 6,500 ANZ staff to work in one integrated area, however the company will maintain its flagship building, 100 Queen Street Melbourne. The new headquarters is the largest office complex in Australia at 84,500 m² NLA, 130,000 sqm GFA and an accredited 6 Green Star Building. Construction commenced in late 2006 and the building opened in late 2009. The building is located at 833 Collins Street. It has been designed by HASSELL & Lend Lease Design - fronting the Yarra River.

The building was one of the winners at the 2010 World Architecture Festival in the category "Interiors and Fit Out of the Year".[15]