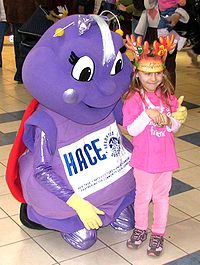 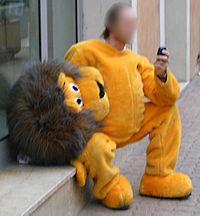 A tired costumed character taking a break. It is traditional to avoid showing the unmasked faces of performers.[citation needed]

The term mascot – defined as a term for any person, animal, or object thought to bring luck[1] – colloquially (informally) includes anything used to represent a group with a common public identity, such as a school, professional sports team, society, military unit, or brand name. Mascots are also used as fictional, representative spokespeople for consumer products, such as the rabbit used in advertising and marketing for the General Mills brand of breakfast cereal, Trix.

In the world of sports, mascots are also used for merchandising. Team mascots are often confused with team nicknames.[2] While the two can be interchangeable, they are not always the same. For example, the athletic teams of the University of Alabama are nicknamed the Crimson Tide, while their mascot is an elephant named Big Al. Team mascots may take the form of a logo, person, live animal, inanimate object, or a costumed character, and often appear at team matches and other related events, sports mascots are often used as marketing tools for their teams to children. Since the mid-20th century, costumed characters have provided teams with an opportunity to choose a fantasy creature as their mascot, as is the case with the Philadelphia Phillies' mascot, the Phillie Phanatic.

Costumed mascots are commonplace, and are regularly used as goodwill ambassadors in the community for their team, company, or organization such as the U.S. Forest Service's Smokey Bear. 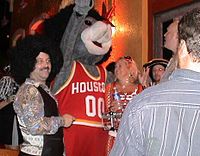 "Clutch the Bear," costumed mascot for the NBA's Houston Rockets, with fans. 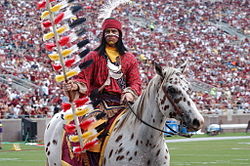 The word mascot has been traced back to a dialectic use in Provence and Gascony, where it was used to describe anything which brought luck to a household.[3] The suggestion that the word is derived from masqu (meaning "masked" or "concealed"), the Provincial French for a child born with a caul, in allusion to the lucky destiny of such children, is improbable.

The word was first popularized in 1880, when French composer Edmond Audran wrote a popular comic operetta titled La Mascotte. However, it had been in use in France long before this, as French slang among gamblers, derived from the Occitan word masco, meaning "witch" (perhaps from Portuguese mascotto, meaning "witchcraft"), and also mascoto, meaning "spell."

Audran's operetta was so popular that it was translated into English as The Mascot, introducing into the English language a word for any animal, person, or object that brings good luck. The word with this definition was then incorporated into many other languages, although often in the French form mascotte.

Often the choice of mascot reflects a desired quality; a common example of this is the "fighting spirit," in which a competitive nature is personified by warriors or predatory animals. Another example works on the viewers' psychology, like the www.angrystudents.com mascot/logo.

Mascots may also symbolize a local or regional trait, such as the Nebraska Cornhuskers' mascot, Herbie Husker: a stylized version of a farmer, owing to the agricultural traditions of the area in which the university is located.

In the United States, controversy[4] surrounds some mascot choices, especially those using human likenesses. Mascots based on Native American tribes are particularly contentious, as many argue that they constitute offensive exploitations of an oppressed culture.[5]

Some sports teams have "unofficial" mascots: individual supporters or fans that have become identified with the team. The New York Yankees, for example, have such an individual in fan Freddy Sez. Former Toronto Blue Jays mascot BJ Birdie was a costumed character created by a Blue Jays fan, ultimately hired by the team to perform at their home games. USC Trojans mascot is Tommy Trojan who rides on his horse (and the official mascot of the school) Traveler.

In Britain, some teams have young fans become "mascots". These representatives sometimes have medical issues, and the appearance is a wish grant,[6] the winner of a contest,[7] or under other circumstances. Unlike the anonymous performers of costumed characters, however, their actions can be associated with the club later on.[8] 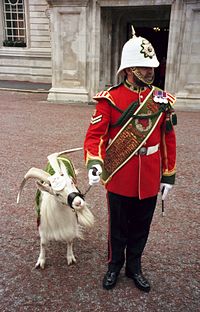 The goat mascot and Goat Major of the Royal Regiment of Wales.

Mascots are also popular in military units. For example, the United States Marine Corps uses the bald eagle as a formal emblem; the bulldog is also popularly associated with the U.S. Marines.

The goat in the Royal Welsh is officially not a mascot but a ranking soldier. Lance Corporal William Windsor retired on 20 May 2009, and a replacement is expected in June.[9] Many regiments of the British Army have a live animal mascot which may appear on parades, including a ram for the 95th Derbyshire Regiment, an Irish Wolfhound for the Irish Guards, a Shetland pony for the Argyll and Sutherland Highlanders, and a goat for the Royal Regiment of Wales. Other British military mascots include a pair of drum horses, an antelope, and a ferret.

The Norwegian Royal Guard adopted a King Penguin named Nils Olav as its mascot on the occasion of a visit to Edinburgh by its regimental band. The (very large) penguin remains resident at Edinburgh Zoo and has been formally promoted by one rank on the occasion of each subsequent visit to Britain by the band or other detachments of the Guard. Regimental Sergeant Major Olav was awarded the Norwegian Army's Long Service and Good Conduct medal at a ceremony in 2005.

Camilla Corona SDO is the mission mascot for NASA's Solar Dynamics Observatory (SDO) and assists the mission with Education and Public Outreach (EPO).

Some bands, particularly in the Heavy Metal genre use band mascots to promote their music. The mascots are usually found on album covers or merchandise such as band T-shirts, but can also make appearances in live shows or music videos. A famous example of a band mascot is Eddie the Head of the English Heavy Metal band Iron Maiden. Eddie is a zombie-like creature which is personified in different forms on all of the band's albums, most of its singles and some of its promotional merchandise. Eddie is also known to make live appearances, especially during the song Iron Maiden. Another notable example of a mascot in music is Skeleton Sam of [The Grateful Dead].