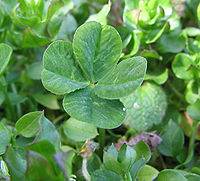 A four-leaf clover is often considered to bestow good luck.

Cultural views of luck vary from perceiving luck as a matter of random chance to attributing to luck explanations of faith or superstition. For example, the Romans believed in the embodiment of luck as the goddess Fortuna,[1] while the philosopher Daniel Dennett believes that "luck is mere luck" rather than a property of a person or thing.[2]

Lucky symbols are popular worldwide and take many forms.

1926 advertisement for lucky jewellery. "Why Be Unlucky?".

The English noun luck appears comparatively late, during the 1480s, as a loan from Low German (Dutch or Frisian) luk, a short form of gelucke (Middle High German gelücke). It likely entered English as a gambling term, and the context of gambling remains detectable in the word's connotations; luck is a way of understanding a personal chance event. Luck has three aspects[3][4] which make it distinct from chance or probability.[5]

Some examples of luck:

Before the adoption of luck at the end of the Middle Ages, Old English and Middle English expressed the notion of "good fortune" with the word speed (Middle English spede, Old English spēd); speed besides "good fortune" had the wider meaning of "prosperity, profit, abundance"; it is not associated with the notion of probability or chance but rather with that of fate or divine help; a bestower of success can also be called speed, as in "Christ be our speed" (William Robertson, Phraseologia generalis, 1693).

The notion of probability was expressed by the Latin loanword chance, adopted in Middle English from the late 13th century, literally describing an outcome as a "falling" (as it were of dice), via Old French cheance from Late Latin cadentia "falling". Fortuna, the Roman goddess of fate or luck, was popular as an allegory in medieval times, and even though it was not strictly reconcilable with Christian theology, it became popular in learned circles of the High Middle Ages to portray her as a servant of God in distributing success or failure in a characteristically "fickle" or unpredictable way, thus introducing the notion of chance.

Luck is interpreted and understood in many different ways.

Luck as lack of control

Luck refers to that which happens to a person beyond that person's control. This view incorporates phenomena that are chance happenings, a person's place of birth for example, but where there is no uncertainty involved, or where the uncertainty is irrelevant. Within this framework one can differentiate between three different types of luck:

Luck as a fallacy

Another view holds that "luck is probability taken personally." A rationalist approach to luck includes the application of the rules of probability and an avoidance of unscientific beliefs. The rationalist feels the belief in luck is a result of poor reasoning or wishful thinking. To a rationalist, a believer in luck who asserts that something has influenced his or her luck commits the "post hoc ergo propter hoc" logical fallacy: that because two events are connected sequentially, they are connected causally as well. In general:

A happens (luck-attracting event or action) and then B happens;
Therefore, A influenced B.

More contemporary authors writing on the subject believe that definition of good destiny is: one who enjoys good health, has the physical and mental capabilities of achieving his goals in life, has good appearance, has happiness in mind and is not prone to accidents. [8]

In the rationalist perspective, probability is only affected by confirmed causal connections.

The gambler's fallacy and inverse gambler's fallacy both explain some reasoning problems in common beliefs in luck. They involve denying the unpredictability of random events: "I haven't rolled a seven all week, so I'll definitely roll one tonight".

Luck as an essence 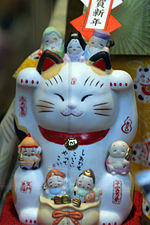 There is also a series of spiritual, or supernatural beliefs regarding fortune. These beliefs vary widely from one to another, but most agree that luck can be influenced through spiritual means by performing certain rituals or by avoiding certain circumstances.

Luck can also be a belief in an organization of fortunate and unfortunate events. Luck is a form of superstition which is interpreted differently by different individuals. Carl Jung coined the term synchronicity, which he described as "a meaningful coincidence".

Belief in the extent of Divine Providence varies; most acknowledge providence as at least a partial, if not complete influence on luck. Christianity, in its early development, accommodated many traditional practices which at different times, accepted omens and practiced forms of ritual sacrifice in order to divine the will of their supreme being or to influence divine favoritism. The concepts of "Divine Grace" or "Blessing" as they are described by believers closely resemble what is referred to as "luck" by others.

Mesoamerican religions, such as the Aztecs, Mayans and Incas, had particularly strong beliefs regarding the relationship between rituals and the gods, which could in a similar sense to Abrahamic religions be called luck or providence. In these cultures, human sacrifice (both of willing volunteers and captured enemies), as well as self sacrifice by means of bloodletting, could possibly be seen as a way to propitiate the gods and earn favor for the city offering the sacrifice. An alternative interpretation[9] would be that the sacrificial blood was considered as a necessary element for the gods to maintain the proper working order of the universe, in the same way that oil would be applied to an automobile to keep it working as designed.

Many traditional African practices, such as voodoo and hoodoo, have a strong belief in superstition. Some of these religions include a belief that third parties can influence an individual's luck. Shamans and witches are both respected and feared, based on their ability to cause good or bad fortune for those in villages near them.

Luck as a self-fulfilling prophecy

Some encourage the belief in luck as a false idea, but which may produce positive thinking, and alter one's responses for the better. Others, like Jean-Paul Sartre and Sigmund Freud, feel a belief in luck has more to do with a locus of control for events in one's life, and the subsequent escape from personal responsibility. According to this theory, one who ascribes their travails to "bad luck" will be found upon close examination to be living risky lifestyles. In personality psychology, people reliably differ from each other depending on four key aspects: beliefs in luck, rejection of luck, being lucky, and being unlucky.[10] People who believe in good luck are more optimistic, more satisfied with their lives, and have better moods.[10] If "good" and "bad" events occur at random to everyone, believers in good luck will experience a net gain in their fortunes, and vice versa for believers in bad luck. This is clearly likely to be self-reinforcing. Thus, a belief in good luck may actually be an adaptive meme. 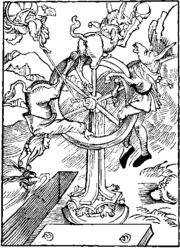 Luck is an important factor in many aspects of society.

A game may depend on luck rather than skill or effort. For example, Chess does not involve any random factors such as throwing dice, while Dominoes has the "luck of the draw" when selecting tiles.

Many countries have a national lottery. Individual views of the chance of winning, and what it might mean to win, are largely expressed by statements about luck. For example, the winner was "just lucky" meaning they contributed no skill or effort.

"Leaving it to chance" is a way of resolving issues. For example, flipping a coin at the start of a sporting event may determine who goes first.

Most cultures consider some numbers to be lucky or unlucky. This is found to be particularly strong in Asian cultures, where the obtaining of "lucky" telephone numbers, automobile license plate numbers, and household addresses are actively sought, sometimes at great monetary expense. Numerology, as it relates to luck, is closer to an art than to a science, yet numerologists, astrologists or psychics may disagree. It is interrelated to astrology, and to some degree to parapsychology and spirituality and is based on converting virtually anything material into a pure number, using that number in an attempt to detect something meaningful about reality, and trying to predict or calculate the future based on lucky numbers. Numerology is folkloric by nature and started when humans first learned to count. Through human history it was, and still is, practiced by many cultures of the world from traditional fortune-telling to on-line psychic reading.

Luck in religion and mythology

Gautama Buddha, the founder of Buddhism, taught his followers not to believe in luck. The view which was taught by Gautama Buddha states that all things which happen must have a cause, either material or spiritual, and do not occur due to luck, chance or fate. The idea of moral causality, karma (Pali: kamma), is central in Buddhism. In the Sutta Nipata, the Buddha is recorded as having said the following about selling luck:

However belief in luck is prevalent in many predominantly Buddhist countries. In Thailand, Buddhists may wear verses (takrut) or lucky amulets which have been blessed by monks for protection against harm.[12] 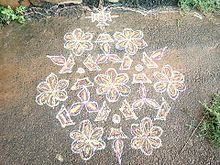 In Hinduism it is said that by proper worship, with a meticulous prayer procedure (Sanskrit: Shri Lakshmi Sahasranam Pujan Vidhi) the blessings of Lakshmi, the Hindu goddess of money and fortune, may be obtained. Lakshmi Parayan (prayer) is performed in most Hindu homes on the day of Diwali, the festival of lights. At that time also Rangoli are drawn, decorative designs on floors of living rooms and courtyards during Hindu festivals that are meant as a sacred welcoming area for the deities.

There is no concept of luck in Islam[13] other than actions determined by God (Allah) based on the merit of the choice made by human beings, and God alone has power over all things (divine decree). It is stated in the Qur'an (Sura: Adh-Dhariyat (The Wind that Scatter) verse:22) that one's sustenance is pre-determined in heaven when the Lord says: "And in the heaven is your provision and that which ye are promised." However, one should supplicate towards God to better one's life rather than hold faith in un-Islamic acts such as using "lucky charms".