African people refers to natives, inhabitants, or citizen of Africa and to people of African descent.[1][2]

Many etymological hypotheses that have been postulated for the ancient name "Africa":

The peoples of Africa

The African continent is home to many different ethnic and racial groups, with wide-ranging phenotypical traits, both indigenous and foreign to the continent.[6] Many of these populations have diverse origins, with differing cultural, linguistic and social traits and mores. Distinctions within Africa's geography, such as the varying climates across the continent, have also served to nurture diverse lifestyles among its various populations. The continent's inhabitants live amidst deserts and jungles, as well as in modern cities across the continent.

Perhaps it is a function of the number of excavations actually performed in given areas, but it is at least suggestive that the five very earliest out of the twelve of earliest archaeological discoveries of Homo sapiens sapiens have been in Africa and the adjacent Arabian peninsula.[7]

As early as 1964, A. W. F. Edwards and others had discovered that three populations in Africa were related but distinguishable on the basis of a relatively small set of genetic information (20 alleles). Those populations were called Tigre (Ethiopians), Bantu (in southern Africa), and Ghanaian (West Africa).

When general anthropometrics were taken as the criteria for grouping, the African population was split into a different three groups: the more closely related Pygmy (such as the Mbuti) and Bushmen (such as the Khoisan) and the Bantu.[8]

By 1988 more genetic detail were known, more groups could be distinguished on the basis of genetic information, but the relationships among these groups were accounted as different depending on which was the data was construed. The groups analyzed at this time were Bantu, Berber and North African, Ethiopian, Mbuti Pygmy, Nilotic, San (Bushman), West African.[9] 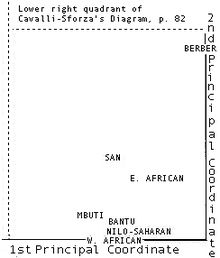 A representation of genetic distances by one analysis

Spencer Wells a geneticist and anthropologist, has traced the migration of the early Africans beyond their own continent by noting the appearance of new genetic markers on the Y-chromosome as the migrations progressed.[10] Studies of mitochondrial DNA conducted within the continent of Africa have shown that the indigenous population has diverged into three divergent main lines of descent.

A number of scholars such as Alan Templeton hold that support is found for traditional racial categories because many studies use the pre-defined categories to begin with, and subsequently insert data into those categories rather than let data speak for itself.[11] Templeton uses modern DNA analysis to argue that human "races" were never "pure", and that human evolution is based on "many locally differentiated populations coexisting at any given time" - a single lineage with many locally gradated variants, all sharing a common fate.

Researchers such as Richard Lewontin maintain that most of the variation within human population is found within local geographic groups and differences attributable to traditional "race" groups are a minor part of human genetic variability.[12] Several other researchers (Barbajuni, Latter, Dean, et al.) have replicated Lewontin's results.[13] According to a study by researcher L. Luca Cavalli-Sforza:

It is often taken for granted that the human species is divided in rather homogeneous groups or races, among which biological differences are large. Studies of allele frequencies do not support this view, but they have not been sufficient to rule it out either. We analyzed human molecular diversity at 109 DNA markers, namely 30 microsatellite loci and 79 polymorphic restriction sites (restriction fragment length polymorphism loci) in 16 populations of the world. By partitioning genetic variances at three hierarchical levels of population subdivision, we found that differences between members of the same population account for 84.4% of the total, which is in excellent agreement with estimates based on allele frequencies of classic, protein polymorphisms. Genetic variation remains high even within small population groups. On the average, microsatellite and restriction fragment length polymorphism loci yield identical estimates. Differences among continents represent roughly 1/10 of human molecular diversity, which does not suggest that the racial subdivision of our species reflects any major discontinuity in our genome.[14]

In the wake of this research, a number of writers[who?] question the classification of African peoples like Ethiopians into "Caucasian" groups, holding that given the minor proportion of human genetic diversity attributable to "race", grouping of such African peoples is arbitrary and flawed, and that DNA analysis points to a range or gradation of types rather than distinct racial categories. Rather than arbitrarily allocating such African groups to a European "race", the range of physical characteristics like skin colour, hair or facial features are more than adequately covered by the differentiation within local geographic groupings.[15]

A 2009 study detailed the genome-wide relationship among the largest number of African populations sampled to date, accordingly, Fourteen ancestral population clusters were found in Africa that correlate with self-described ethnicity and shared cultural and/or linguistic properties; [16]

Speakers of Bantu languages (part of the Niger–Congo language family) are the majority in southern, central and east Africa proper, due to the Bantu expansion from West Africa. However, there are several Nilotic groups in East Africa, and a few remaining indigenous Khoisan ('San' or 'Bushmen') and Pygmy peoples in southern and central Africa, respectively. Bantu-speaking Africans also predominate in Gabon and Equatorial Guinea, and are found in parts of southern Cameroon and southern Somalia. In the Kalahari Desert of Southern Africa, the distinct people known as the Bushmen (also "San", closely related to, but distinct from "Hottentots") have long been present. The San are physically distinct from other Africans and are the pre-Bantu indigenous people of southern Africa. Pygmies are the pre-Bantu indigenous peoples of central Africa.

The population of North Africa in ancient times consisted predominantly of Berbers in the West and Egyptians in the East. The Semitic Phoenicians and Jews, the Iranian Alans, and the European Greeks, Romans and Vandals settled in North Africa as well. The indigenous Berbers still constitute the majority in Morocco, while they are a significant minority within Algeria which is now a predominantly Arabic-speaking country. They are also still present in small numbers in Tunisia and Libya. The Tuareg and other often-nomadic peoples are the principal inhabitants of the Saharan interior of North Africa. Nubians are a Nilo-Saharan-speaking group (though many also speak Arabic now), who developed an ancient civilization in Northeast Africa.

The Arabs arrived from Asia in the seventh century, introducing the Arabic language, and Islam to North Africa. Over several centuries, the majority of the indigenous African population of the region became Arabised by adopting the Arabic language, and developing a common identity with other peoples throughout the Arab World. Today, the majority of North Africans are Arabic-speaking, although the Berber language still predominates among Berber communities in certain areas. Sudan and Mauritania are divided between a mostly Arabized north and a Nilotic south. The Nubians have also been partly Arabised, although their original language is still in use.

In East Africa, some areas, particularly the island of Zanzibar and the Kenyan island of Lamu, received Arab Muslim and Southwest Asian settlers and merchants throughout the Middle Ages and even in antiquity. This gave birth to the Swahili culture.

Despite having presence in Africa since Greek and Roman times, in the sixteenth century, Europeans such as the Portuguese and Dutch began to establish trading posts and forts along the coasts of western and southern Africa. Eventually, a large number of Dutch augmented by French Huguenots and Germans settled in what is today South Africa. Their descendants, the Afrikaners and the Coloureds, are the largest European-descended groups in Africa today. In the nineteenth century, a second phase of colonisation brought a large number of French and British settlers to Africa. The Portuguese settled mainly in Angola, but also in Mozambique. The Italians settled in Libya, Eritrea, Ethiopia, and Somalia. The French settled in large numbers in Algeria where they became known collectively as pieds-noirs, and on a smaller scale in other areas of North and West Africa as well as in Madagascar. The British settled chiefly in South Africa as well as the colony of Rhodesia, and in the highlands of what is now Kenya. Germans settled in what is now Tanzania and Namibia, and there is still a population of German-speaking white Namibians. Smaller numbers of European soldiers, businessmen, and officials also established themselves in administrative centers such as Nairobi and Dakar. Decolonisation during the 1960s often resulted in the mass emigration of European-descended settlers out of Africa — especially from Algeria, Angola, Kenya and Rhodesia. However, in South Africa and Namibia, the white minority remained politically dominant after independence from Europe, and a significant population of Europeans remained in these two countries even after democracy was finally instituted at the end of the Cold War. South Africa has also become the preferred destination of white Anglo-Zimbabweans, and of migrants from all over southern Africa.

European colonisation also brought sizable groups of Asians, particularly people from the Indian subcontinent, to British colonies. Large Indian communities are found in South Africa, and smaller ones are present in Kenya, Tanzania, and some other southern and east African countries. The large Indian community in Uganda was expelled by the dictator Idi Amin in 1972, though many have since returned. The islands in the Indian Ocean are also populated primarily by people of South Asian origin, often mixed with Africans and Europeans.[18]

The Malagasy of Madagascar are an Austronesian people, but those along the coast are generally mixed with Bantu, Arab, Indian and European populations. Malay and Indian ancestries are also important components in the group of people known in South Africa as Cape Coloureds (people with origins in two or more races and continents). In Mauritius, a tiny island in the Indian Ocean that is included in the African continent, Indian people form a majority.

During the past century or so, small but economically important colonies of Lebanese[19] and Chinese[20] have also developed in the larger coastal cities of West and East Africa, respectively.[21]

Decolonisation has left some nations in power and marginalized others.

Conflicts with ethnic aspects taking place in Africa since Decolonisation include

Total population of Africa is estimated at 1 billion as of 2009.