Ethnic origins of people in Canada

Ethnic origins of people in Canada

Given here are the ethnic origins of Canadian residents (citizens, landed immigrants, and non-citizen temporary residents) as recorded by them on their 2006 census form. The relevant census question asked for "the ethnic or cultural origins" of the respondent's ancestors and not the respondents themselves.

As data were collected by self-declaration, labels may not necessarily describe the true ancestry of respondents.[1] Also note that many respondents acknowledged multiple ancestries. These people were added to the "multiple origin" total for each origin listed. These include responses as varied as a respondent who listed eight different origins and a respondent who answered "French Canadian" (leading to him/her being counted once for "French" and once for "Canadian". As with all self-reported data, understanding of the question may have varied from respondent to respondent. 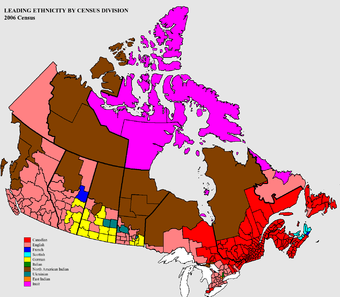 Map of the dominant self-identified ethnic origins of ancestors per census division of 2006.