There are approximately 1.2 million Canadians of Scandinavian descent living in Canada, representing around 3.9% of Canada’s population. In the Canada 2006 Census 432,515 Canadian residents claimed Norwegian ancestry,[1] making up 1.4% of the population of Canada. Significant Norwegian immigration took place from the mid-1880s to 1930.[2] 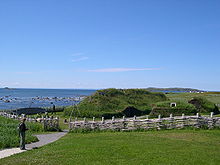 Norwegians have played important roles in the history of Canada. The very first Europeans to reach North America were in fact Icelandic Norsemen, who made at least one major effort at settlement in what is today the Canadian province of Newfoundland and Labrador (L'Anse aux Meadows) around 1000 AD. Snorri Thorfinnsson aka Snorri Guðriðsson, the son of Thorfinn Karlsefni and his wife Guđriđ, is thought to be the first white baby born in Canada and North America.[3]

In 1960 archaeological evidence of the only known Norse settlement[4] in North America (outside of Greenland) was found at L'Anse aux Meadows on the northern tip of the island of Newfoundland, in what is now the Canadian province of Newfoundland and Labrador. Although this proved conclusively the Vikings' pre-Columbian discovery of North America, whether this exact site is the Vinland of the Norse accounts is still a subject of debate. There is a consensus among scholars that the Vikings did reach North America, approximately five centuries prior to the voyages of Christopher Columbus.[5]

The main sources of information about the Norse voyages to Vinland are two Icelandic sagas, The Saga of Eric the Red and the Saga of the Greenlanders. These stories were preserved by oral tradition until they were written down some 250 years after the events they describe. The existence of two versions of the story shows some of the challenges of using traditional sources for history, because they share a large number of story elements, but use them in different ways. For example, both sagas feature a mariner called Bjarni, who is driven off course on a voyage to Greenland, and whose authority is subsequently called into question; in "Greenlanders" he is Bjarni Herjolfsson, who discovers the American mainland as a result of his mishap, but in "Eric" he is Bjarni Grimolfsson, who is driven into an area infested with shipworms on the way home from Vinland, with the result that his ship sinks. A brief summary of the plots of the two sagas shows many more examples.

The major reason for Norwegian migration appears to be one of economics. The Norwegian farms were often small and unable to support a family. Added to that was the lack of other employment to augment the family income. Between 1850 and 1910 approximately 681,011 Norwegians made their way to North America. Very few originally stayed in Canada but some, after a stay in the American Midwest, made their way across the border and settled in the present provinces of Alberta and Saskatchewan. One of the earliest Norwegian parties to America in the nineteenth century sailed from Stavanger on July 4, 1825. This party was led by Kleng Pedersen (Cleng Peerson). The ship, Restauration, of 45 tons, master being Helland, was a rebuilt sloop carrying 52 passengers. To that number was added baby Larson, who was born on the voyage. Many of this party were Quakers, leaving Norway for religious reasons. The voyage took 97 days and they arrived in New York on October 9, 1825. In 1836 the Norden and Den Norske Klippe sailed to America with 167 passengers. Another two vessels sailed the following year.

The British Government repealed the navigation laws in 1849 and from 1850 on, Canada became the port of choice as Norwegian ships carried passengers to Canada and took lumber back to Norway. The Canadian route offered many advantages to the emigrant. "They moved on from Quebec both by rail and by steamer for another thousand or more miles for a steerage fare of slightly less than $9.00. Steamers from Quebec brought them to Toronto, then the immigrants often traveled by rail for 93 miles to Collingwood on Lake Huron, from where steamers transported them across Lake Michigan to Chicago, Milwaukee and Green Bay." In 1855 there were eight vessels reported from Norway to Canada in the immigration report, averaging a 45 day crossing. These vessels carried 1,275 passengers. The following year, 14 vessels made the voyage averaging 54 days, and carrying 2,821 passengers. One of these vessels, the Orion from Stavanger, was said to carry 50 paupers all heading for the American west but, due to a lack of funds were sent to Buffalo. The passengers of the Gifion, all proceeded to Wisconsin.

There were a considerable number of deaths among the Norwegians in 1857. Of the 6,507 immigrants who arrived in that year there were 100 deaths. In 1859, however, emigration dropped off with only 16 vessels arriving from Norway carrying 1,756 passengers. Of the over 28,460 Norwegians who came to Canada in the 1850s it is estimated that only 400 remained in Canada the majority moved on into the American west. A small settlement of Norwegians was begun at Gaspe Peninsula, Lower Canada, in 1854. A report in 1859, stated that 25 families, totaling 126 persons, were settled in the Gaspe. They were joined in 1860 by another 50 persons. However, the Norwegians were not content, and after a very hard winter in 1861-2 they began to make their way to the American Midwest. About 14 families who arrived on the ship Flora from Kristiania in 1856 went to the Eastern Townships, near present day Sherbrooke. They were following in the footsteps of two other Norwegians who settled in this area in 1853. Johan Schroder, who travelled in the United States and Canada in 1863, reported that a group of Norwegian immigrants, led by an agent, settled in Bury in the Eastern Townships in 1856. One of the first settlers in this area was Captain John Svenson who died in 1878.

Settlements in Canada which were primarily created by Norwegian immigrants: 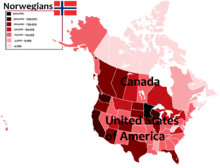 A map of the United States and Canada with number of Norwegian Americans and Norwegian Canadians in every state and province including Washington, D.C.. 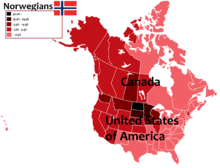 A map of the United States and Canada with percentage of Norwegian Americans and Norwegian Canadians in every state and province including Washington, D.C.. 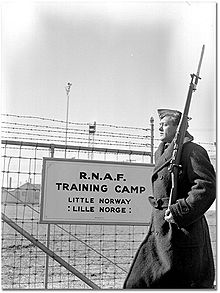 Canada is also the home of Little Norway and Camp Norway, both Norwegian military training facilities, during the Second World War, and the port of Halifax was a refuge for the Norwegian merchant marine and Royal Norwegian Navy during the same conflict. 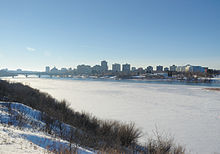 7.6% of the population in Saskatchewan is of Norwegian ancestry.

According to Statistics Canada figures from the 2006 census, 521,390 Canadians reported themselves as having Norwegian ethnic background (multiple responses were allowed). The figures are also broken down by provinces and territories for Norwegians: