The demographics of Toronto make Toronto one of the most multicultural cities in the world. Data released by Statistics Canada as part of the 2006 census indicates that Toronto is more ethnically diverse than Miami, Los Angeles, and New York City. 49.9% of Toronto's population is foreign-born.[1]

Christianity is the largest faith group in Toronto's census metropolitan area, with Roman Catholics comprising 33.4% of the population. The Anglican Church and United Church of Canada account for 6.9% each. Other religious groups include Islam (5.5%), Hinduism (4.1%), Judaism (3.5%), Buddhism (2.1%), and Sikhism (1.9%). 16.6% of the population claim they have no religious affiliation.[3]

While English is the predominant language spoken by Torontonians, Statistics Canada reports that other language groups are significant, including Chinese, Portuguese, Tamil, Arabic, Persian, Pashto, Urdu, Spanish, Punjabi, Somali, Gujarati and Italian. Canada's other official language, French, is spoken by 1.4% of the population. 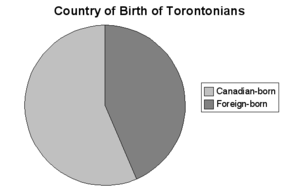 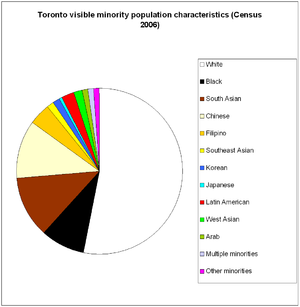 The 2006 census indicates 46.9% of Toronto's population is composed of visible minorities; 1,162,630 non-Whites, or 23% of Canada's visible minority population, live in Toronto; of this, approximately 70% are of Asian ancestry. Annually, almost half of all immigrants to Canada settle in the Greater Toronto Area. In March 2005, Statistics Canada projected that the combined visible minority proportion will comprise a majority in both Toronto and Vancouver by 2012.

While English is the predominant language spoken by Torontonians, Statistics Canada reports that other language groups are significant including Chinese, Portuguese, and Italian. Only 1.4% of city residents claim French (Canada's other official language) as their mother tongue, and a scant few are bilingual in English and French.

According to the Canadian government, Toronto has the highest per capita immigration rate in the world.[7] Within Canada itself, 43% of all new immigrants to Canada settle in the Greater Toronto Area adding significantly to Toronto's population.