The Toronto City Council is the governing body of the city of Toronto, Ontario, Canada.

Members represent wards throughout the city, and are known as councillors.

For ease of electoral division, wards are based upon the city's provincial electoral districts, with each district divided into two city wards. (The provincial boundaries were redistributed in 2007 along the lines of the new federal boundaries; as of the 2010 election, a similar adjustment which would increase the number of councillors from 44 to 45 or 46 has not been made, so the districts remain slightly uncoordinated.)

The city council has 45 members: 44 ward councillors plus the mayor. The city posts agendas for council and committee meetings.[1]

There are seven standing committees of council:

There are three internal business committees:

The Executive Committee is composed of the Mayor, Deputy Mayor, chairs of the seven standing committees and four other members appointed by City Council. Sub-committees of the executive committee include the: 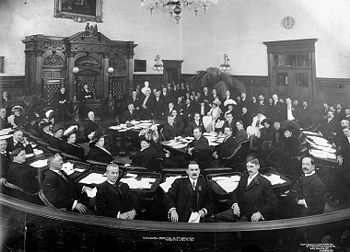 The inaugural meeting of the newly elected Toronto City Council in January 1911.

In 1848 Toronto was divided into a group of wards, each named after a Christian saint. While out of use for over a century, these ward names continue to appear in neighbourhood names and subway stations and, until the 1990s, provincial electoral districts.[2] The old wards and their boundaries in their final form, used from 1871 to 1891, were:

In the 1890s the city moved to a six ward system, with each ward known by a number. Over the next three decades three new wards were added, one each in the north, east, and west, as new areas were annexed to the city of Toronto. This basic ward map remained in place until 1969. Overtime it became considerably unbalanced with the downtown wards having far fewer voters than those on the outskirts. In each ward the two candidates who received the most votes were elected. When a higher level of municipal government, Metro Toronto, was introduced in 1953, to co-orindate services between the city of Toronto and its suburbs, this system was adapted so that the top vote getter of the two elected councillors from each ward was also a member of Metro Council.

Until 1955 municipal elections were held annually, either on New Year's Day or on the first Monday in December. In 1955 council moved to two-year terms, and in 1982 three-year terms were introduced. Along with the other municipalities of Ontario, Toronto moved to a four-year municipal term in 2006.

From 1904 until 1969 there was a four person Board of Control in addition to city council. The Board was elected at large across the city, and its members had considerably more power than the city councillors. In 1969 the Board of Control was abolished and the four controllers were replaced by four new councillors from two new wards. The ward map was rebalanced to give more equitable representation.

In 1985 the system of electing Metro councillors was changed so that two separate ballots were held in each ward, one for the city the other for Metro. In the next election a separate set of wards was established for Metro councillors. Each Metro ward consisted of two city wards, each electing only one councillor.

With the amalgamation of the city of Toronto with the suburban municipalities of Metro in 1997, the councils of the six former cities were abolished. The new council for the "megacity" kept the ward map of Metro Toronto, but doubled the number of councillors by adopting the system of electing two councillors from each ward. East York had only one ward and was thus greatly underrepresented. Former East York mayor Michael Prue lobbied successfully for a third councillor to be elected from that ward, and this was implemented mid-term.

This system was only used for the first megacity election. In 2000 a new ward map was devised based on the federal ridings (electoral districts) that covered Toronto. Each riding was split in half to create the current system of 44 wards.

Despite some attempts to bring political parties to Toronto municipal politics, organized parties have had limited influence. Over its history city council has thus been divided into unofficial factions. Upon the formation of the city, the first division was between the Tory Family Compact and reformers under the leadership of William Lyon Mackenzie. Mackenzie was elected as the city's first mayor, but after the defeat of the Upper Canada Rebellion, the reformers were marginalized. For the next century the Tories dominated Toronto municipal politics, as they did the other levels in "Tory Toronto". The Tories were associated with staunch Protestantism, shown through membership in the Orange Order, and support for the Lord's Day Act.

In the 1930s various forms of left wing opposition arose to the Tory dominated council. The Co-operative Commonwealth Federation (CCF) was founded in 1932 and the pro-labour social democratic party found support in various working class areas of Toronto and several of its members were elected to city council. Unaffiliated anti-poverty activists like May Birchard also were elected to council in this era. An important faction in Toronto politics in the 1930s and 1940s were the communists. There was considerable communist support in the downtown areas covered by Ward 4 and Ward 5, especially in the heavily Jewish areas of Kensington Market and the Garment District around Spadina Avenue and further west along College and up to Christie Pits including what is now Little Italy. The peak of communist influence was in the 1946 election where leader Stewart Smith was elected to the Board of Control and three other communists won seats on city council. With the beginning of the Cold War and staunch opposition from the other political groups, the communist presence quickly disappeared. The last communist alderman lost his seat in 1950.

The first part of the 20th century was also the era of the newspaper slates. Each of the daily newspapers would endorse a full slate of candidates for office. The two most influential were the right wing Toronto Telegram and the more left leaning Toronto Daily Star. In the early parts of the century, the duelling papers ran the communications portion of the campaign of the candidates they supported, using yellow journalism to extol those they supported and denigrate those they opposed. The newspaper slates did not have a unified ideology. Rather all the papers claimed to be seeking a balanced council, making sure that groups such as labour and Roman Catholics had representation on council. Beyond these few exceptions, the slates of all the papers were largely made up of male, white, Conservative, Orangemen. Many candidates also appeared on the slates of multiple newspapers.[3] With the exception of James Simpson, who became Toronto's first socialist mayor in 1935, the city's mayors were Tories in the first half of the 20th century.

The character of Toronto politics began to change in the 1950s and 1960s as the Anglo Tory lock on power faded in the increasingly diverse city. In 1952 Allan Lamport became the first Liberal elected mayor in over 40 years. In 1954 Nathan Phillips, a long-serving Jewish alderman, was elected mayor, though he was himself a staunch Tory. His religion was an important issue in the election, in which his opponent proclaimed himself to be running as "Leslie Saunders, Protestant". In 1966 former CCF Member of Provincial Parliament William Dennison was elected mayor.

In the late 1960s and 1970s a new division arose on city council between two groups that became known as the "Reformers" and the "Old Guard". Both groups crossed party lines and were divided by their approach to urban issues. The Reform faction arose in opposition to the urban renewal schemes that had been in favour in the previous decades. The two key battles were over the proposal for the Spadina Expressway and the replacement of the Trefann Court neighbourhood with a housing project. The Reformers opposed the destruction of existing neighbourhoods and followed the urban theories of recent Toronto arrival Jane Jacobs. The Old Guard supported new highways and housing projects, in part because of their close ties to the development industry. The debate between the two groups became the central issue of the 1969 municipal election with mayoral candidate Margaret Campbell running on an explicitly reform platform. Campbell lost the mayoralty, but on city council six veteran members of the Old Guard were defeated. In 1972 Reform leader David Crombie was elected mayor, and he was succeeded by one of the most radical reformers, John Sewell.

The Reformers won the major battles and reshaped the development of the city, but they still faced significant opposition from the right as new issues became central. Developers and business owners objected to the curbs on development. The right also capitalized on concerns about law and order and taxes. The right wing returned to power in 1980 when Art Eggleton was elected mayor and city council also shifted to the right that decade. The basic pattern of right wing and left wing factions has continued to the present. Since the 1990s the left has dominated as the Old City of Toronto shifted to the left, but amalgamation in 1997 added many suburban areas with more right-leaning voters. The left, composed of the New Democrats and some left-leaning Liberals, is the largest faction at city hall. They are opposed by the right, which consists of Conservatives and right-wing Liberals.

Changes were made to the council in 2007:

On October 25, 2010, a record number of women were elected to council, with 15 female councilors comprising one third of all council members.[4]

Normally, if a vacancy occurs in a council seat, a by-election is held in the affected ward as early as possible.

If a vacancy occurs after March 31 in the year of a municipal election, however, provincial law prohibits the holding of a by-election so close to a regular election — and accordingly city council solicits applications for a temporary appointment to the vacant seat. Normally, a condition of the application process is that the appointed interim councillor does not run as a candidate in the regular election, so that he or she does not gain an unfair incumbency advantage. There have, nonetheless, been instances in which appointed interim councillors have tested the rule; most recently, Paul Ainslie did so in 2006 by filing as a candidate in a different ward than the one where he had been appointed.