Metropolitan Toronto
Not to be confused with Greater Toronto Area.

The Municipality of Metropolitan Toronto was a senior level of municipal government in the Toronto, Ontario, Canada area from 1954 to 1998. It was created out of York County and was a precursor to the later concept of a regional municipality, being formed of smaller municipalities but having more responsibilities than a county or district. It was commonly referred to as "Metro" or "Metro Toronto" to avoid confusion with the City of Toronto then existing, which was one of its constituent municipalities.

Passage of the 1997 City of Toronto Act caused the 1998 amalgamation of Metro Toronto and its constituents into the present City of Toronto. The boundaries of present-day Toronto are the same as those of Metropolitan Toronto upon its dissolution: Lake Ontario to the south, Etobicoke Creek and highway 427 to the west, Steeles Avenue to the north, and the Rouge River to the east.

Prior to the formation of Metro, the municipalities surrounding the central City of Toronto were all independent towns and villages. All were members of York County, which provided a minimal amount of services. After 1912, the city no longer annexed suburbs. The prevailing sentiment was that the higher costs of providing services in the suburbs provided nothing in return to the existing taxpayer in the City.[1] At times the suburbs asked to be annexed but the city chose not to do so.

In 1924, Conservative cabinet minister George S. Henry, who had been a warden of York County, was the first to propose a 'metropolitan district' with its own council from the city and the county to administer shared services. He wrote a draft bill, but the government chose not to act on it.[2]

The Great Depression saw almost all of the town and villages of the County go insolvent and taken over by the province. In 1933, Henry, now the premier, appointed a formal inquiry into forming a metropolitan district. York County proposed a 'metropolitan county' of Toronto, which would take over several services in the city and the surrounding suburbs. The inquiry died with the defeat of Henry in 1934.[3]

The Liberal government named the first minister of municipal affairs, David A. Croll, and introduced a draft bill to amalgamate the City and the built-up suburbs. The draft bill faced strong opposition in Toronto and was withdrawn. The government then started its own inquiry into issues of the suburbs surrounding Toronto. Through consensus, it came to the conclusion that a metropolitan county was the best solution. The inquiry reported in September 1939, and its conclusions put aside for the duration of World War II.[3]

Two factors changed in the 1940s. The Conservatives were elected in 1943, with a changed policy, intending to promote economic growth through government action. Also in 1943, the first Master Plan was adopted in Toronto. It recognized that future growth would take place in the vacant land of adjacent suburbs. Planning would have to take into account the whole metropolitan area.[4]

Forest Hill reeve Fred Gardiner, who was well-connected to the Conservative premier George Drew through his political connections, now promoted the idea of ambitious new programs to lay the capital infrastructure for growth. In 1946, the province passed the Planning Act required each urban municipality to have its own Planning Board. York County formed its own Toronto and Suburban Planning Board, under the chairmanship of James P. Maher, and the vice-chairmanship of Fred Gardiner. The Board promoted specific projects, and promoted a suburban 'green belt', a unified system of arterial roads and the creation of a single public transit network.[5]

The Board was ineffective. Projects such as a bridge across the Don River Valley, and the Spadina Road Extension (the basis for the later Spadina Expressway) were rejected by the local municipalities. Gardiner, elected to chairman of the board in 1949, wrote to Premier Leslie Frost that only a unified municipality could measure up to the problems. In 1950, the City of Toronto Council voted to adopt an amalgamated city, while nearly all of the suburbs rejected the amalgamation.

The Frost government moved immediately and on February 25, 1953, introduced the bill to create the Municipality of Metropolitan Toronto. The new municipality would have the power to tax real estate and borrow funds on its own. It would be responsible for arterial roads, major sewage and water facilities, regional planning, public transportation, administration of justice, metropolitan parks and housing issues as needed. The municipalities retained their individual fire and police departments, business licensing, public health and libraries.[7]

The Council would have its own chairman, selected by the province initially, then to be elected by the Council itself after 1995. Premier Frost convinced Fred Gardiner, who still preferred amalgamation, over the metro scheme, to take the job. Gardiner was well known to Frost through the Conservative Party, was well-off, was felt to be beyond personal corruption. Gardiner accepted the position partly due to his friendship with Frost, and he demanded that he retain his corporate connections. He also felt that the job would be "bigger than anything he had tried before." The bill to form Metro was passed on April 2, 1953. The Gardiner appointment was announced on April 7.[8] 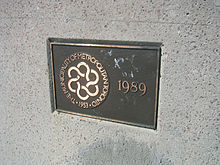 A Metropolitan Toronto plaque on a city overpass.

In Canada, the creation of municipalities falls under provincial jurisdiction. Thus it was provincial legislation, the Metropolitan Toronto Act, that created this level of government in 1953. When it took effect in 1954, the portion of York County south of Steeles Avenue, a concession road and township boundary, was severed from the county and incorporated as the Municipality of Metropolitan Toronto. The area north of Steeles remained in York County, which ultimately became York Region in 1971.

Metro Toronto was composed of the City of Toronto, the towns of New Toronto, Mimico, Weston, and Leaside; the villages of Long Branch, Swansea, and Forest Hill; and the townships of Etobicoke, York, North York, East York, and Scarborough.

The Metropolitan Toronto Council initially consisted of 12 councillors from Toronto (including the mayor), and one representative (usually a mayor or reeve) from each of the surrounding municipalities. Metropolitan Toronto also had planning authority over the surrounding townships such as Vaughan, Markham, and Pickering, although these areas did not have representation on Metro Council.

Gardiner was Metro Chairman from 1953 until 1961. Under his leadership, Metropolitan Toronto invested in numerous infrastructure projects, including the opening of the first subway line, start of construction of the second subway line, water and sewage treatment facilities, rental housing for the aged and the Gardiner Expressway, named after Gardiner. Metro also amalgamated the various police forces into one in 1956. It was a period of high growth. The city's population increased from one million to 1.6 million by the time he left office.[9]

As a result of continued growth, the province reorganized Metro in 1967. The seven small towns and villages, which were no longer any denser than the surrounding areas, were merged into neighboring municipalities. This left the City of Toronto and the five townships, which at this time were redesignated as boroughs (all but East York later chose to be designated as cities). Long Branch, New Toronto, and Mimico were absorbed back into Etobicoke; Weston was absorbed into York; Leaside into East York; and Swansea and Forest Hill, into Toronto. The reorganized Metropolitan Toronto adopted a flag and decal using a symbol of six rings representing the six municipalities.

As the seats on Metro Council were reapportioned according to population, the council was now dominated by the suburban majority; but it continued to address suburban and inner city issues in equal measure.

Originally, members of the Metropolitan Toronto Council also sat on their respective lower-tier councils; they were not directly elected to the upper-tier council, and because Toronto councillors often voted in a bloc, inner-city issues tended to dominate. The arrangement was achieved by electing two members in each ward. The person who achieved the greatest number of votes was named the senior alderman. The person with the second most votes was the junior alderman. Both aldermen sat on the local council. Only the senior alderman sat on Metro Council. The Province of Ontario changed this arrangement in 1988, requiring direct elections to Metro Council and severing the links between the two tiers. Now only the mayors of the six member municipalities sat on both the upper-tier and lower-tier councils. Metropolitan Toronto became more difficult to manage, and the incentive for the lower-tier councillors to scapegoat Metro council (which they no longer sat on) increased tensions.

The first Chairman of Metropolitan Toronto, Fred Gardiner, was appointed by the province; subsequent chairmen were elected by Metro Council itself. The Metro Chairman was, for many years, an ex-officio member of the Council without having to be elected to Metro Council by constituents as either a local mayor, controller, alderman or councillor. Beginning in 1988, the position of chairman was chosen by council members from amongst its own members (excluding mayors who could vote for Metro Councillor but could no longer run for the position).

As usual in Ontario municipalities, all of these councils were non-partisan, although in later years some councillors (and candidates) did identify themselves explicitly as New Democratic Party members. Metro councillors were elected by plurality.

From the inception of Metro Toronto until amalgamation, there were six chairmen altogether:

Metro Toronto ward names contained the number of the ward, name of municipality and the name of the local communities:

By the 1990s, many people believed that Metropolitan Toronto, set up to encompass the urban region of Toronto, was no longer relevant since it constituted barely 50% of what was becoming known as the Greater Toronto Area. On the other hand, its residents often felt more concerned with local matters than Metro-wide ones. When a City of Toronto election ballot included a non-binding referendum question on eliminating the Metro level of government, there was a substantial vote in favour.

In the 1995 provincial election, Ontario Progressive Conservative Party leader Mike Harris campaigned on reducing the level of government in Ontario, and promised to examine Metropolitan Toronto with an eye to eliminating it. However, in the end the Harris government announced what they saw as a superior cost-saving plan: Metro Toronto would be amalgamated with its six member municipalities to form a new City of Toronto. In effect, the existing City of Toronto and the other five municipalities would be abolished and the larger Metro government retained.

The announcement touched off vociferous public objections to what the media termed the "megacity" plan. In March 1997 a referendum in all six municipalities produced a vote of more than 3:1 against amalgamation; in April, both opposition parties held a filibuster in the provincial legislature. But the Harris government, with a large majority, passed the City of Toronto Act. The amalgamation would take place effective January 1, 1998, at which time a new City of Toronto came into existence.

At its inception in 1953, Metro was headquartered at a six-floor building at 67 Adelaide Street East (now home to Adelaide Resource Centre for Women). When the new Toronto City Hall opened in 1965, one of its twin towers was intended for Metro Toronto offices and the other for the City of Toronto; the two councils shared the central Council Chamber. Eventually this space proved inadequate and committee facilities and councillors' offices were relocated to an office tower at the southwest corner of Bay and Richmond Street (390 Bay Street), across from City Hall; Metro Council continued to meet in the City Hall council chamber. Finally, in 1992, the Metro government moved out of Toronto City Hall altogether and into a newly constructed Metro Hall at 55 John Street, which was designed by Brisbin Brook Beynon Architects (BBB Architects).

The amalgamated council chose to meet at City Hall, though it temporarily met at Metro Hall while City Hall was retrofitted for the enlarged council. Metro Hall continues to be used as office space by the City of Toronto.

The following is a list of services that were funded and provided by the Metro government:

In addition, the following agencies were Metro government agencies: