National symbols of Canada are the symbols that are used in Canada and abroad to represent the country and its people. Prominently, the use of the maple leaf as a Canadian symbol dates back to the early 18th century, and is depicted on its current and previous flags, the penny, and on the coat of arms (or royal arms).

The Crown symbolizes the Canadian monarchy,[1] and appears on the coat of arms (used by parliamentarians and government ministries), the flag of the Governor General,[1] the coats of arms of many provinces and territories; the badges of several federal departments, the Canadian Forces, Royal Military College of Canada, Royal Canadian Mounted Police (RCMP), many regiments, and other police forces; on buildings, as well as some highway signs and licence plates. Also, the Queen's image appears in Canadian government buildings, military installations and schools; and on Canadian stamps, $20 bank notes, and all coins. 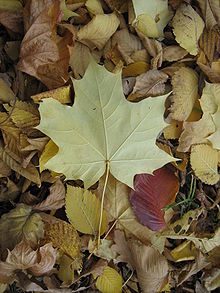 The maple leaf is the characteristic leaf of the maple tree, and is an important national symbol of Canada.

Canada is known for its vast forests and mountain ranges and the animals that reside within them,[citation needed] such as moose, beaver, caribou, polar bears, grizzly bears, Canada Goose, Canada Lynx, and the common loon. The beaver's emblematic status originated from the fact much of Canada's early economic history was tied to the fur trade in beaver fur, used to make hats fashionable in Europe. Another reason for the beaver's status in Canadian heraldry is that it is symbolic of industry, due to its habit of constructing dams and lodges. Beavers appear on the reverse of Canadian nickels (5 cent piece).

The Canadian horse is an official Canadian symbol[2][3] and commonly appears in images with the Mounties. The Officer Cadets of the Royal Military College of Canada are normally represented in their distinctive scarlet uniform with a ceremonial sword or swagger stick.

Products made from the country's natural resources that are unique or easily available to the country, such as bitumen, are also associated with Canadian identity.

In recent years, other symbols have become a source of pride: notably, the I Am Canadian campaign by Molson beer, most notably the commercial featuring Joe Canadian, infused domestically-brewed beer with nationalism, creating irony when Molson later merged with the American beer company Coors. The Canadian fashion retailer Roots sells a variety of merchandise designed to evoke nationalistic sentiment.