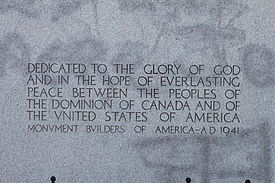 The name of Canada has been in use since the earliest European settlement in Canada, with the name originating from a First Nations word kanata (or canada) for "settlement", "village", or "land". Today, Canada is pronounced /ˈkænədə/ in English and [kanada] in French. In Inuktitut, one of the official languages of the territory of Nunavut, the First Nations word (pronounced [kanata]) is used, with the Inuktitut syllabics ᑲᓇᑕ.

The French colony of Canada, New France, was set up along the Saint Lawrence River and the northern shores of the Great Lakes. Later the area became two British colonies, called Upper Canada and Lower Canada until their union as the British Province of Canada in 1841. Upon Confederation in 1867, the name Canada was officially adopted for the new Dominion, which was commonly referred to as the Dominion of Canada until after World War II. 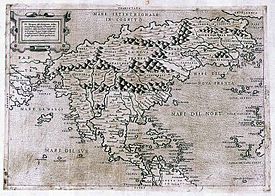 The name Canada originated around 1535 from the Saint-Lawrence Iroquoian word kanata meaning "village",[1] "settlement",[2][3] or "land";[3] another contemporary translation was "cluster of dwellings".[3] Saint-Lawrence Iroquoian, which was spoken by the inhabitants of Stadacona and the neighbouring region near present-day Quebec City in the 16th century,[4] was closely related to other Iroquoian languages, such as Oneida and Mohawk. In modern Mohawk, for example, the word kaná:ta' means "town".[5][6] Jacques Cartier transcribed the word as "canada" and was first to use the word to refer not only to the village of Stadacona but also to the neighbouring region and to the Saint Lawrence River, which he called rivière de Canada. By 1545, European books and maps began referring to this region as Canada.

While the Saint-Lawrence Iroquoian origin for the name Canada is now widely accepted, other explanations have been put forth. Pierre François Xavier de Charlevoix noted that some had attributed the name to the Iroquois word Kannata (pronounced Cannada) meaning "collection of huts".[7][8][9][10][11] One theory suggested that the name originated when Spanish or Portuguese explorers, having explored the northern part of the continent and unable to find gold and silver, wrote acá nada, or cá nada, ("nothing here") on that part of their maps.[11][12][13]

After the conquest of New France 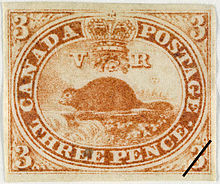 After the British conquest of New France (including ceding of the French colony, Canada) in 1763, the colony was renamed as the Province of Quebec. Following the American revolution and the influx of United Empire Loyalists into Quebec, the colony was split on 26 December 1791 into Upper and Lower Canada, sometime being collectively known as "The Canadas", the first time that the name "Canada" was used officially.[14]

While Cartier used Canadien to refer to the Iroquois residents of the colony, the term later came to be applied to French subjects born in Canada, and then to inhabitants of both colonies.

Upper and Lower Canada were merged into one colony, the Province of Canada, in 1841, based on the recommendations of the Durham Report.[15] The former colonies were then known as Canada East and Canada West, and a single legislature was established with equal representation from each. Underpopulated Canada West opposed demands by Canada East for representation by population, but the roles reversed as Canada West's population surpassed the east's. The single colony remained governed in this way until 1 July 1867, often with coalition governments. A new capital city was being built at Ottawa, chosen in 1857 by Queen Victoria, and became a national capital.

Selection of the name Canada 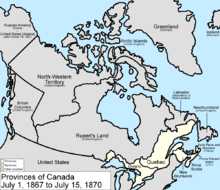 Map of Canada on July 1, 1867, showing the nation's provinces of Ontario, Quebec, New Brunswick and Nova Scotia in the colour white

While the provinces' delegates spent little time, if any, in settling on 'Canada' as the name for the new country, others proposed a variety of other names:[17][18]

Walter Bagehot of The Economist newspaper in London argued that the new nation should be called 'Northland' or 'Anglia' instead of Canada.[19] On these names, the statesman Thomas D'Arcy McGee commented, "Now I would ask any honourable member of the House how he would feel if he woke up some fine morning and found himself, instead of a Canadian, a Tuponian or a Hochelegander?" 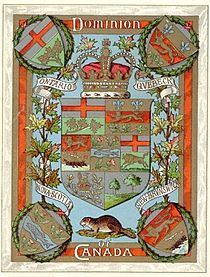 During the Charlottetown Conference of 1864, John A. Macdonald, who later became the first Prime Minister of Canada, talked of "founding a great British monarchy", in connection with the British Empire. He advocated, in the fourth Canadian draft of the British North America Act, the name "Kingdom of Canada,"[20] in the text is said:

Canada's founders, led by Sir John A. Macdonald wished their new nation to be called the Kingdom of Canada, to "fix the monarchical basis of the constitution."[22] The governor general at the time, the Viscount Monck, supported the move to designate Canada a kingdom;[23] however, officials at the Colonial Office in London opposed this potentially "premature" and "pretentious" reference for a new country. They were also wary of antagonizing the United States, which had emerged from its Civil War as a formidable military power with unsettled grievances because British interests had sold ships to the Confederacy despite a blockade, and thus opposed the use of terms such as kingdom or empire to describe the new country.[citation needed]

New Brunswick premier Sir Samuel Leonard Tilley suggested the term 'Dominion',[24] inspired by Psalms 72:8 (from the King James Bible): "He shall have dominion also from sea to sea, and from the river unto the ends of the earth."[25] This is also echoed in Canada's motto: A mari usque ad mare (Latin for "from sea to sea") (Ps. 72:8)

The term had been used for centuries to refer to the lands held by a monarch,[26] and had previously been adopted as titles for the Dominion of New England and the Dominion and Colony of Virginia. It continued to apply as a generic term for the major colonial possessions of the British Empire until well into the 20th century.[27] Its adoption as a title for Canada in 1867 served the purpose of upholding the monarchist principle in Canada; in a letter to Queen Victoria, Lord Carnarvon stated: "The North American delegates are anxious that the United Provinces should be designated as the 'Dominion of Canada.' It is a new title, but intended on their part as a tribute to the Monarchical principle which they earnestly desire to uphold.".[28] 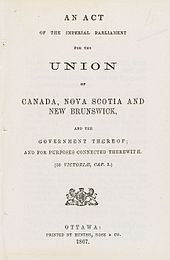 Front page of a copy of the Constitution Act of 1867

Macdonald, however, bemoaned its adoption. In a letter to Lord Knutsford on the topic of the loss of the use of the word kingdom, Macdonald said:

"A great opportunity was lost in 1867 when the Dominion was formed out of the several provinces.
"The declaration of all the B.N.A. provinces that they desired as one dominion to remain a portion of the Empire, showed what wise government and generous treatment would do, and should have been marked as an epoch in the history of England. This would probably have been the case had Lord Carnarvon, who, as colonial minister, had sat at the cradle of the new Dominion, remained in office. His ill-omened resignation was followed by the appointment of the late Duke of Buckingham, who had as his adviser the then Governor General, Lord Monck - both good men, certainly, but quite unable, from the constitution of their minds, to rise to the occasion. Had a different course been pursued, for instance, had united Canada been declared to be an auxiliary kingdom, as it was in the Canadian draft of the bill, I feel sure almost that the Australian colonies would, ere this, have been applying to be placed in the same rank as The Kingdom of Canada."

He added as a postscript that it was adopted on the suggestion of British colonial ministers to avoid offending republican sensibilities in the United States:

"P.S. On reading the above over I see that it will convey the impression that the change of title from Kingdom to Dominion was caused by the Duke of Buckingham. This is not so. It was made at the instance of Lord Derby, then foreign minister, who feared the first name would wound the sensibilities of the Yankees. I mentioned this incident in our history to Lord Beaconsfield at Hughenden in 1879, who said, 'I was not aware of the circumstance, but it is so like Derby, a very good fellow, but who lives in a region of perpetual funk.'"[29]

Use of the term dominion was formalized in 1867 through Canadian Confederation. In the Constitution of Canada, namely the Constitution Act, 1867 (British North America Acts), the preamble of the Act indicates:

"Whereas the Provinces of Canada, Nova Scotia, and New Brunswick have expressed their Desire to be federally united into One Dominion under the Crown of the United Kingdom of Great Britain and Ireland, with a Constitution similar in Principle to that of the United Kingdom..."

and section 3 indicates that the provinces:

The French translation of the 1867 British North America Act translated "One Dominion under the Name of Canada" as "une seule et même Puissance sous le nom de Canada" using Puissance (power) as a translation for dominion. Later the English loan-word dominion was also used in French.[34]

Use of Canada and Dominion of Canada 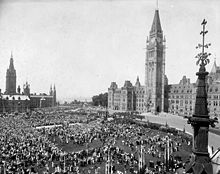 Neither the term Dominion of Canada nor Dominion government appear in the 1867 Act; however, the former appears in the Constitution Act, 1871 — usage of which was "sanctioned" [35] — and both appear in other texts of the period, as well as on numerous Canadian bills before 1967.

Until the 1950s, the term Dominion of Canada was commonly used to identify the country. As Canada acquired political authority and autonomy from the United Kingdom, the federal government began using simply Canada on state documents.

The transition away from the use of Dominion was formally reflected in 1982 with the passage of the Canada Act, which refers only to Canada. Later in 1982, the national holiday was renamed from Dominion Day to Canada Day. Section 4 of the 1867 BNA Act also declares that:

Unless it is otherwise expressed or implied, the Name Canada shall be taken to mean Canada as constituted under this Act.

and this has been interpreted to mean that the name of the country is simply Canada. No constitutional statute amends this name, and the subsequent Canada Act 1982 does not use the term dominion. However, the Canadian constitution includes the preceding BNA Acts, where the term is used; also, the Canada Act 1982 does not state that Canada is not a dominion. Official sources of the United Nations system,[36][37] international organizations (such as the Organization of American States[38]), the European Union,[39] the United States,[40] and other polities with which Canada has official relations as a state consistently use Canada as the only official name, state that Canada has no long-form name, or that the formal name is simply Canada. While no legal document ever says that the name of the country is anything other than Canada,[41] Dominion and Dominion of Canada remain official titles of the country.[42][43][44]

In recent years, the terms Dominion of Canada and Dominion are occasionally used to distinguish modern (post-1867) Canada from either the earlier Province of Canada or from the even earlier The Canadas. The terms are also used to distinguish the federal government from the provinces, though in this usage "federal" has become more common than "dominion". Among those who lament disuse of the term was the late Eugene Forsey, in response to what he and other monarchists consider increasing republicanism. However, the federal government continues to produce publications and educational materials that specify the currency of these official titles, although these publications are not themselves legal or official documents.[44][45][46] For instance, in 2008 the Canadian government registered the Maple Leaf Tartan with the Scottish Tartans Authority under the name Dominion of Canada.[47]