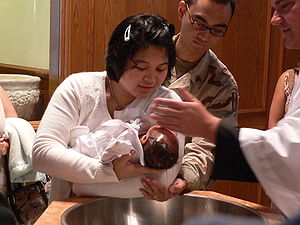 Ceremonies, such as baptism, can be used to give names.

A name is a word or term used for identification. Names can identify a class or category of things, or a single thing, either uniquely, or within a given context. A personal name identifies a specific unique and identifiable individual person, and may or may not include a middle name. The name of a specific entity is sometimes called a proper name (although that term has a philosophical meaning also) and is a proper noun. Other nouns are sometimes, more loosely, called names; an older term for them, now obsolete, is "general names".

The use of personal names is not unique to humans. Dolphins also use symbolic names, as has been shown by recent research.[1] Individual dolphins have distinctive whistles, to which they will respond even when there is no other information to clarify which dolphin is being referred to.

Caution must be exercised when translating, for there are ways that one language may prefer one type of name over another. A feudal naming habit is used sometimes in other languages: the French sometimes refer to Aristotle as "le Stagirite" from one spelling of his place of birth, and English speakers often refer to Shakespeare as "The Bard", recognizing him as a paragon writer of the language. Finally, claims to preference or authority can be refuted: the British did not refer to Louis-Napoleon as Napoleon III during his rule.

In Arthurian mythology, part of the code of honor and chivalry practiced by knights was that a knight who lost a duel must reveal his name to the victor. It was considered a breach of honor or decorum to reveal one's name before combat. A frequent topos in the legends is that a defeated knight would, after revealing his name, ask the victor what his name was: if the victor turned out to be a much stronger and more famous knight (e.g. one of Arthur's knights) the loser actually saved face, because he was beaten by a knight already held to be stronger than him, and thus there was no shame in defeat. However, if a strong and powerful knight was defeated, and the victor turned out to be a relatively unknown and not particularly strong knight, it was a grave humiliation.

As a result of this pattern, it was considered extremely odd within the rules of Arthurian society when a knight refused to take off his helmet or reveal his identity, even after he had won a duel. Sometimes this happened because the victorious knight simply did not know his own name, as was the case with Lancelot and Percival during their early careers. This inability to reveal their own names even in victory led many to assume incorrectly that they were trying to insult the vanquished.

A major exception to the rule was Sir Gawain: Gawain considered himself to be the greatest of his uncle Arthur's knights; he felt that his honor was so great that he did not need to hide his name before a duel. Thus at the opening of any duel Gawain would openly announce "I am Gawain", as he expected never to be defeated and so it would not diminish his honor to reveal his name.

In the ancient world, particularly in the ancient near-east (Israel, Mesopotamia, Egypt, Persia) names were thought to be extremely powerful and to act, in some ways, as a separate manifestation of a person or deity.[4] This viewpoint is responsible both for the reluctance to use the proper name of God in Hebrew writing or speech, as well as the common understanding in ancient magic that magical rituals had to be carried out "in [someone's] name". By invoking a god or spirit by name, one was thought to be able to summon that spirit's power for some kind of miracle or magic (see Luke 9:49, in which the disciples claim to have seen a man driving out demons using the name of Jesus.) This understanding passed into later religious tradition, for example the stipulation in Catholic exorcism that the demon cannot be expelled until the exorcist has forced it to give up its name, at which point the name may be used in a stern command which will drive the demon away.

In the Old Testament, the names of individuals are meaningful; for example, Adam is named after the "earth" (Adamah) from which he was created. (Genesis 2)

A change of name indicates a change of status. For example, the patriarch Abram and his wife Sarai are renamed "Abraham" and "Sarah" when they are told they will be the father and mother of many nations (Genesis 17:4, 17:15). Simon was renamed Peter when he was given the Keys of Heaven. (Gospel of Matthew 16).

Throughout the Bible, characters are given names at birth that reflect something of significance or describe the course of their lives. For example: Solomon meant peace, and the king with that name was the first whose reign was without warfare. Likewise, Joseph named his firstborn son Manasseh (Hebrew: "causing to forget") as a gesture of forgiveness to his brothers for selling him into slavery.

Biblical Jewish people did not have surnames which were passed from generation to generation. However, they were typically known as the child of their father. For example: דוד בן ישי (David ben Yishay) meaning, David, son of Jesse. In a sense, they used their fathers' first names as their own last names, a practice done by most Muslims today. Similar to Jewish names, the "ben" is in place by "bin" or "ibn" for males, "binte", "binti" or "ibnu" for females to Muslims. Sometimes, names include "Al-", "Ali-", "-allah", "-lah/-llah" or "-ullah" as it means "a servant to God" or "God's servant". They would sometimes indicate the place they or their child live in.

The Babylonian Talmud maintains that names exert a mystical influence over their bearers, and a change of name is one of four actions that can avert an evil heavenly decree, that would lead to punishment after one's death. Rabbinical commentators differ as to whether the name's influence is metaphysical, connecting a person to their soul, or bio-socio-psychological, where the connection affects his personality, appearance and social capacities. The Talmud also states that all those who descend to Gehenna will rise in the time of Messiah. However, there are three exceptions, one of which is he who calls another by a derisive nickname.

A naming convention is an attempt to systematize names in a field so they unambiguously convey similar information in a similar manner.

Naming conventions are useful in many aspects of everyday life, enabling the casual user to understand larger structures.

Street names within a city may follow a naming convention; some examples include:

Large corporate, university, or government campuses may follow a naming convention for rooms within the buildings to help orient tenants and visitors. Otherwise, rooms may be numbered in some kind of a rational scheme.

Parents may follow a naming convention when selecting names for their children. Some have chosen alphabetical names by birth order. In some East Asian cultures, it is common for one syllable in a two syllable given name to be a generation name which is the same for immediate siblings. In many cultures it is common for the son to be named after the father or a grandfather. In certain African cultures, such as in Cameroon, the eldest son gets the family name for his given name, also, giving names such as "Thomas Thomas" (but the names are not European names like this one).

In other cultures, the name may include the place of residence, or the place of birth. The Roman naming convention denotes social rank.

Products may follow a naming convention. Automobiles typically have a binomial name, a "make" (manufacturer) and a "model", in addition to a model year, such as a 2007 Chevrolet Corvette. Sometimes there is a name for the car's "decoration level" or "trim line" as well: e.g., Cadillac Escalade EXT Platinum, after the precious metal. Computers often have increasing numbers in their names to signify the next generation.

Courses at schools typically follow a naming convention: an abbreviation for the subject area and then a number ordered by increasing level of difficulty.

The process of developing a name for a brand or product is heavily influenced by marketing research and strategy to be appealing and marketable. The brand name is often a neologism or pseudoword, such as Kodak or Sony.

In fiction, proper names of people or places are often unique to the work in which they appear. Although, within the work of fiction proper, the name may nonetheless be said to have a certain ethnic origin, the name itself may not actually exist. For example, the character of Ororo Munro (Storm of the X-Men franchise) is of African descent. Her first name, however is not an authentic African name. Names may also be created to either represent ethnic neutrality or corruption of a name with the passage of time. This is a common technique used by science fiction and fantasy writers who may also employ alternate spellings of existing names. Also, many science fiction operates on the premise that racial and ethnic boundaries will cease to exist in the future thus producing names that appear to be mixes of different ethnic sources. Yoshiyuki Tomino (creator of the anime Mobile Suit Gundam) is notable for creating character names that are unusual, exotic, and sometimes silly sounding. Examples include Char Aznable (which is actually based on a real person), Bright Noa, Quess Paraya, and Marvel Frozen. The science fiction writer Isaac Asimov has also created names which may or may not be variants or corruptions of existing or ancient names. Examples include Dors Venabili, R. Daneel Olivaw, and Giskard Reventlov. The Star Wars and Dune franchises contains many character names that juggle existing names with created ones; Leia Organa, Ben Kenobi, Paul Atreides, Vladimir Harkonnen.

A name generator is a program that uses language rules or word combining techniques to generate a list of names. Some common ones include finding your Jedi or stripper name.

According to Verisign,[5] the .name top-level domain name (TLD) is designed for individuals to create a presence and make online communications easy and accessible. Not exclusive to registrars, social networking and community sites may also offer .name registration to their members and customers as a value-added service to help establish an individual identity online.[6]