"O Canada" is the national anthem of Canada. The song was originally commissioned by Lieutenant Governor of Quebec Théodore Robitaille for the 1880 Saint-Jean-Baptiste Day ceremony; Calixa Lavallée wrote the music as a setting of a French Canadian patriotic poem composed by poet and judge Sir Adolphe-Basile Routhier. The lyrics were originally in French and translated into English in 1906.

Robert Stanley Weir wrote in 1908 another English version, one that is not a literal translation of the French. Weir's lyrics have been revised twice, taking their present form in 1980, but the French lyrics remain unaltered. "O Canada" had served as a de facto national anthem since 1939, officially becoming Canada's national anthem in 1980, when the Act of Parliament making it so received Royal Assent and became effective on July 1 as part of that year's Dominion Day celebrations.

The Crown-in-Council established set lyrics for "O Canada" in Canada's two official languages, as well as in Inuktitut. There is also a commonly sung bilingual version which combines the English and French lyrics. The lyrics are as follows:[1][2][3]

It has been noted that the opening theme of "O Canada" bears a strong resemblance to the "Marsch der Priester" ("March of the Priests"), from the opera Die Zauberflöte (The Magic Flute), composed in 1791 by Wolfgang Amadeus Mozart, and that Lavallée's melody was inspired by Mozart's tune.[4] The line "The True North strong and free" is based on Alfred Tennyson's description of Canada as "that True North whereof we lately heard." In the context of Tennyson's poem, the word "true" means "loyal" or "faithful".[4]

The lyrics and melody of "O Canada" are both in the public domain,[1] a status unaffected by the trademarking of the phrases "with glowing hearts" and "des plus brillants exploits" for the 2010 Winter Olympics in Vancouver.[5] Two provinces have adopted Latin translations of phrases from the English lyrics as their mottos: Manitoba — Gloriosus et Liber ("Glorious and Free")[6] — and Alberta — Fortis et Liber ("Strong and Free").[7] Similarly, the motto of the Canadian Army is Vigilamus Pro Te ("We Stand on Guard for Thee").

In June 1990, Toronto City Council voted 12 to 7 in favour of recommending to the Canadian government that the phrase "our home and native land" be changed to "our home and cherished land" and that "in all thy sons command" be partly reverted to "in all of us command." Also proposed, but ultimately rejected, was the alternate wording "thy sons and daughters stand." Councillor Howard Moscoe said that the words native land were not appropriate for the many Canadians who were not native-born and that the word sons implied "that women can't feel true patriotism or love for Canada."[12] Senator Vivienne Poy similarly criticized the English lyrics of the anthem as being sexist and she introduced a bill in 2002 proposing to change the phrase "in all thy sons command" to "in all of us command."[11] In the late 2000s, the anthem's religious references (to God in English and to the Christian cross in French) were criticized by secularists.[13][14]

In the Throne Speech delivered by Governor General Michaëlle Jean on March 3, 2010, a plan to have parliament review the "original gender-neutral wording of the national anthem" was announced.[15] However, three quarters of Canadians polled after the speech objected to the proposal and,[16] two days later, the prime minister's office announced that the Cabinet had decided to leave the national anthem alone.[17] 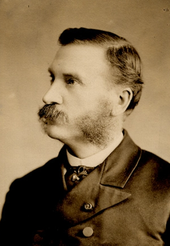 The original French lyrics of "O Canada" were written by Sir Adolphe-Basile Routhier, to music composed by Calixa Lavallée, as a French Canadian patriotic song for the Saint-Jean-Baptiste Society and first performed on June 24, 1880, at a Saint-Jean-Baptiste Day banquet in Quebec City. At that time, the "Chant National", also by Routhier, was popular amongst Francophones as an anthem,[18] while "God Save the Queen" and "The Maple Leaf Forever" had, since 1867, been competing as unofficial national anthems in English Canada. "O Canada" joined that fray when a group of school children sang it for the 1901 tour of Canada by the Duke and Duchess of Cornwall (later King George V and Queen Mary).

Five years later, the Whaley and Royce company in Toronto, Ontario, published the music with the French text and a first translation into English by Thomas Bedford Richardson and, in 1908, Collier's Weekly magazine held a competition to write new English lyrics for "O Canada". The competition was won by Mercy E. Powell McCulloch, but her version never gained wide acceptance.[18] In fact, many made English translations of Routhier's words; however, the one version that gained the widest currency was written in 1908 by Robert Stanley Weir, a lawyer and at the time Recorder of the City of Montreal. A slightly modified version of his poem was published in an official form for the Diamond Jubilee of Confederation in 1927, and gradually it became the most widely accepted and performed version of this song, winning out among the alternatives by the 1960s. 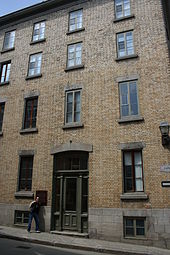 The tune was thought to have become the de facto national anthem after King George VI remained at attention during its playing at the dedication of the National War Memorial in Ottawa, Ontario, on May 21, 1939;[19] though George was actually following a precedent set by his brother, Edward, the previous king of Canada, when he dedicated the Canadian National Vimy Memorial in France in 1936.[20] Still, by-laws and practices governing the use of song during public events in municipalities varied; in Toronto, "God Save the Queen" was employed, while in Montreal it was "O Canada".

Prime Minister Lester B. Pearson in 1964 said one song would have to be chosen as the country's national anthem and the government resolved to form a joint committee to review the status of the two musical works. The next year, Pearson put to the House of Commons a motion that "the government be authorized to take such steps as may be necessary to provide that 'O Canada' shall be the National Anthem of Canada while 'God Save the Queen' shall be the Royal Anthem of Canada," of which parliament approved. In 1967, the Prime Minister advised Governor General Georges Vanier to appoint the Special Joint Committee of the Senate and House of Commons on the National and Royal Anthems; the group first met in February and,[21] within two months, on April 12, 1967, presented its conclusion that "O Canada" should be designated as the national anthem and "God Save the Queen" as the Royal Anthem of Canada,[1] one verse from each, in both official languages, to be adopted by parliament. The group was then charged with establishing official lyrics for each song. For "O Canada", the Robert Stanley Weir version of 1908 was recommended, with a few minor changes, for the English words;[22] two of the "stand on guard" phrases were replaced with "from far and wide" and "God keep our land."[1]

Still, it was not until 1970 that the Queen in Right of Canada purchased the right to the lyrics and music of "O Canada" and 1980 before the song finally became the official national anthem via the National Anthem Act.[20][21] The act established a religious reference to the English lyrics and the phrase "From far and wide, O Canada" to replace one of the somewhat tedious repetitions of the phrase "We stand on guard." This change was controversial with traditionalists and, for several years afterwards, it was not uncommon to hear people (some by choice, some by memory reflex) still singing the old lyrics at public events. In contrast, the French version has never been changed from its original.[23] 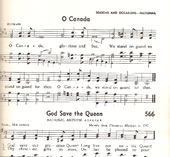 A page from Hymns of the Christian Life, 1962, depicting then long-standing refrain lyrics to O Canada, but not the original

The Buchan version, was once popular in British Columbia.

Singers at public events often mix the English and French lyrics to represent Canada's linguistic duality.[26][27] For example, one common form is singing the first three and last three lines in English. The last two lines could also alternate between English and French. Roger Doucet, the former singer of national anthems at the Montreal Forum for the National Hockey League's Montreal Canadiens team, almost always sang the first seven lines in French, and then completed the song in English. This practice has continued with the team's following anthem singers.

"O Canada" is routinely played before sporting events involving Canadian teams. During the opening ceremonies of the 1988 Winter Olympics in Calgary, "O Canada" was performed in the Southern Tutchone language by Yukon native Daniel Tlen.[28][29] The NHL requires arenas to perform both the Canadian and American national anthems at games that involve teams from both countries.[30] One American team, the Buffalo Sabres, goes a step further and performs both anthems before every game, a nod to Buffalo's location near the Canadian border and the team's substantial number of Canadian fans.[27] At a Calgary Flames game in February 2007, young Cree singer Akina Shirt became the first person ever to perform "O Canada" in the Cree language at an NHL contest.[31] Major League Baseball teams have also played the song at games involving the Toronto Blue Jays, the former Montreal Expos and at the beginning of the All Star Game. Previously, recordings of the anthem were broadcast at television networks' sign-on and sign-off.

The National Anthem Act specifies the lyrics and melody of "O Canada", placing both of them in the public domain, allowing the anthem to be freely reproduced or used as a base for derived works, including musical arrangements.[32] There are no regulations governing the performance of "O Canada", leaving citizens to exercise their best judgment.[1] When it is performed at an event, traditional etiquette is to either start or end the ceremonies with the anthem, including situations when other anthems are played, and for the audience to stand during the performance.[1] Civilian men usually remove their hats, while women and children are not required to do so.[1]