The 1988 Winter Olympics, officially known as the XV Olympic Winter Games, were a winter multi-sport event celebrated in and around Calgary, Alberta, Canada from 13 to 28 February 1988. The host was selected in 1981 after having beat Falun, Sweden and Cortina d'Ampezzo, Italy. Most events took place in Calgary, although Alpine skiing took place in Kananaskis and Nordic skiing and biathlon taking place in Canmore. The games were held after the 1988 Winter Paralympics in Innsbruck, the last time the two tournaments were not held in the same city.

Fifty-seven nations and 1,423 athletes participated in the games, with five countries making their debut in the Winter Olympics. Super-G made its Olympic debut, while curling, freestyle skiing, short track speed skating and disabled skiing were demonstration sports. Speed skating was held in an indoor rink for the first time and the games were extended to 16 days.

Calgary first tried to win a bid for the Winter Olympics in 1964, and again in 1968, but it was defeated by Innsbruck, Austria, and Grenoble, France, respectively.

Calgary finally won the bid for Canada's first Winter Olympics on 30 September 1981. It beat out Falun, Sweden and Cortina d'Ampezzo, Italy. (Cortina d'Ampezzo had previously hosted the 1956 Winter Olympics.) The vote was conducted by the International Olympic Committee in Baden-Baden, West Germany, at the 84th IOC Session and 11th Olympic Congress.

All levels of Canadian government helped to fund the Games. The federal government, provided $225 million (note all figures listed in Canadian dollar, not adjusted for inflation), the province of Alberta paid $125 million and the city of Calgary with $50 million. The American host network, ABC, paid a then record $398 million, while the main host broadcaster, the CTV Television Network television network, paying $45 million for domestic rights. A further $90 million was raised by sponsorships and licenses.

Concern was raised almost from the beginning about the suitability of Calgary hosting the Winter Olympics because of the city's local weather conditions for the month of February. That area of Alberta is plagued unpredictably with a weather phenomenon called a chinook wind, which are periods where the weather becomes extremely unseasonably mild (above freezing) in short periods of time. A year prior to the event, the Whit Fraser report hinted that there was a possibility that mild winter weather could cause major problems for the Games. During the Games, there were indeed minor problems—for example, some bobsleigh runs had to be re-done because of sand getting blown onto the bobsleigh track.

This Olympic torch relay, with the theme "Share the Flame", stands as one of the longest in Olympic history, and especially for the Winter Olympic Games. It was a stark contrast to Canada's first Olympic torch relay for the 1976 Summer Olympics, which started in Ottawa and went directly east to Montreal; this distance, 200 kilometers (120 mi) is the shortest in Summer Olympic Games history so far.[citation needed] For Canada's first Winter Olympics, the Olympic torch, modeled after the Calgary Tower, was carried by both famous and ordinary Canadians in a continuous 88-day run across Canada, covering all 10 provinces and 2 territories (Yukon and the Northwest Territories; the territory of Nunavut did not exist until 1999), for a total distance of about 18,000 kilometers (11,000 mi). The torch traveled via ordinary running, dog sled, and snowmobile. Citizens won the chance to run a 1-kilometre (0.62 mi) distance with the Olympic torch by entering a lottery sponsored by Petro Canada.

The instrumental theme song ("Winter Games") and its vocal counterpart ("Can't You Feel It?") were both composed and performed by Canadian musician David Foster. Internationally recognized Canadian folk/country musicians Gordon Lightfoot and Ian Tyson were two of the featured performers at the opening ceremonies of the games, performing Tyson's "Four Strong Winds" and Lightfoot's "Alberta Bound" while a group of line dancers performed for the crowds.[2]

The official mascots of the games were two western-attired polar bears named Hidy and Howdy. The names were chosen from a field of 7,000 names through a contest sponsored by the Calgary Zoo. They were designed by Sheila Scott of Great Scott Productions, and produced by International Mascot Corporation of Edmonton, Alberta. 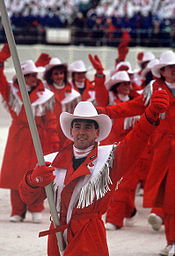 Brian Orser carrying the Canadian flag at the opening ceremony 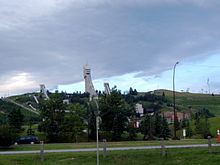 Organizers and government claimed that the Calgary Olympic Games turned a profit. They declared a surplus of between $90 and $150 million, and this money was used to fund the various Olympic venues in Calgary. Ever mindful of the financial disaster of the 1976 Summer Olympics, Calgary organizers attempted to be financially successful, because there was political pressure on them to erase the spectre of a second Canadian Games at a loss. Organizers claimed that their use of these profits for the future Canada Olympic Park and the funding of Canadian athletes through the Calgary Olympic Development Association (CODA) gave Calgary a lasting legacy and impact on the Canadian sports scene, and also provided funds for the maintenance and upgrading of athletic facilities in Calgary, Banff, and Lake Louise. Well after the Olympics ended, they declared, CODA continued to use its resources to develop resources for Olympic athletes in the city, which included supporting the National Sport School, Canada's first high school designed for Olympic calibre athletes, in a partnership with the Calgary Board of Education.

However, a widely cited 1993 audit and independent research conducted by The Toronto Star in 1999 showed that these financial figures were largely false.[3] When announcing these numbers, organizers had removed from their calculations $461 million in subsidies provided by federal, provincial and local governments used mainly for building the games venues. When these government investments were included in the balance sheets, the Calgary Olympics were reported to have produced a sizeable financial loss. General infrastructure and venue costs do not go into the balanche sheets of an Olympic Organizing Committee. Only costs directly related to hosting the Games are included in the OOC's budget and balance sheets, as venues are often private or government built.

However, the games fuelled an endowment fund of $70.5 million that is now worth $185 million and continues to fund sport in a variety of ways. Additionally, the Calgary Olympic Committee (OCO) gave the Canadian Olympic Committee (COC) $40 million, which after investment is now worth $110 million; those funds assist the COC's $8 million annual contribution to national teams, coaches and athletes and permits its existence as a self-sustaining organization that does not rely on government funding.[4]

Five world class facilities were built for the games, and several others were improved.

Eight national teams use Calgary or Canmore as a home base, and Calgary has hosted 200 national and international competitions between 1987 and 2009 because of its Olympic facilities.[4]

Of 30 world records in speed skating, 17 of them have been set at the Olympic Oval in Calgary, considered the fastest ice in the world.[4]

There was a substantial social impact as well. From the unprecedented volunteer involvement in staging the Games, a program was put in place where ordinary Calgarians could purchase, for $19.88 in the summer of 1986, a brick at the main medal presentation plaza called the Olympic Plaza with their names laser-engraved on it. The involvement of ordinary Calgarians was evident. This was of paramount importance to the organizing committee, OCO'88, as it kept the Games from appearing distant and "out of reach". Over 10,000 volunteers helped make the these games possible.

In 1999, a bribery scandal hit the Salt Lake Organizing Committee (SLOC) for the 2002 Winter Olympics. The main focus of that scandal was the tactics used by that organizing committee then to win the bid in Budapest, Hungary, at the 104th IOC Session in 1995. There was talk of stripping the rights of hosting the Games away at the time because of that circumstance. That whole scene played out before the unforeseen 9/11 terrorist attacks on New York City and Washington, D.C. on the United States. Calgary then sent an offer to step in to be an alternate host of the 2002 Winter Olympics, if Salt Lake City was unable to host the Games because of both counts.

Calgary tried again to bid for the Winter Olympic Games in 2010, but lost out when the Canadian Olympic Committee (COC) chose Vancouver as the city that would be the Canadian bid internationally. Eventually, Vancouver was chosen to host the 2010 Winter Olympics over PyeongChang, Korea, and Salzburg, Austria in July 2003 at the 115th IOC Session in Prague, Czech Republic.

As in the 1976 Summer Olympics, the host Canadian team failed to win a gold medal in the 1988 Winter Olympics. The Canadian Olympic Committee, determined not to see this happen a third time at the 2010 Winter Olympics in Vancouver, launched the Own the Podium program. Mogul skiier Alexandre Bilodeau finally won Canada's first gold medal on home soil at Vancouver and Canada finished off the Vancouver Games by winning 14 gold medals in all, a record for any nation at a single Winter Olympics.

The Alberta provincial government, under Ed Stelmach on 30 August 2007, committed CDN$69-million, of the Calgary Olympic Development Association (CODA) CDN$276-million overall project cost, to construct Canada's first Centre of Sport Excellence. This announcement included the unveiling of a new facility design for Canada Olympic Park (COP) called the Athletic and Ice Complex. Previous governments have already given funds recently to upgrade and/or maintain existing Olympic winter venues in Calgary and Canmore, Alberta in the past. For example, CDN$25.6-million was provided to renovate the Canmore Nordic Centre Provincial Park area, in time for the 2005 Alberta Centennial FIS World Cup event. CDN$600,000 was spent in maintaining the ski jumping venue at Canada Olympic Park.[5] On 5 October 2007, the Canadian federal government promised an additional CDN$40-million toward the project, according to an article written by the Canadian Broadcasting Corporation (CBC).[6]

When awarded the games, Calgary had very little in the way of sports infrastructure to host such an event. The following is a list of venues built for the games (see venues below for complete list of all facilities used for the games): 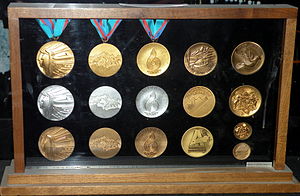 A set of medals from the Games on display at the Scotiabank Saddledome in Calgary.

It was the first Winter Olympic Games for Fiji, Guam, Guatemala, Jamaica, and Netherlands Antilles.