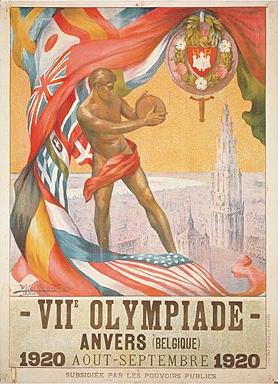 Size = 250px
Nations participating = 29
Athletes participating = 2,626
(2,561 men, 65 women)
Events = 154 in 22 s
Opening ceremony = ,
Closing ceremony = ,
Officially opened by =
Athlete's Oath =
Judge's Oath =
Olympic Torch =
Stadium = Olympisch Stadion
The 1920 Summer Olympics, officially known as the Games of the VII Olympiad, were an which was celebrated in in , . The 1920 Games were awarded to Antwerp to honor the suffering that had been inflicted on the Belgian people during . [http://www.olympic.org/uk/games/past/index_uk.asp?OLGT=1&OLGY=1920] [http://www.flanderstoday.eu/jahia/Jahia/pid/2223] The initial choice for the site of the Games had been , .

The , to be held in , capital of the , were canceled due to the war. The aftermath of the war and the affected the Olympic Games not only due to new states being created, but also by sanctions against the nations that lost the war and were blamed for starting it.

Budapest had initially been selected to host the Games over and , but as the had been a German ally in the First World War, the Games were transferred to Antwerp in April 1919. Hungary, , , and were also banned from competing in the Games. Germany remained banned until 1925, and instead hosted a series of games called , starting with the Winter edition of 1922 (which predated the first ).

* These Olympics were the first in which the was uttered, the first in which doves were released to symbolize peace, and was the first time the was flown.
* The USA won 41 Gold, 27 Silver, and 27 Bronze medals, the most won by any of the 29 nations attending. Sweden, Great Britain, Finland and Belgium rounded out the five most successful medal-winning nations.
* The Games also featured a week of winter sports, with and making their Olympic debut.
* retained the 100 m swimming title he won before the war.
* won 5 gold medals in the fencing events.
* At the age of 72, Sweden's running deer double-shot event champion won in the team event to become the oldest Olympic champion ever.
* 23-year-old won the 10,000 m and 8,000 m cross country races, took another gold in team cross country, and a silver in 5,000 m run. His contributions for Finland broke the U.S. dominance record in track and field with 9 medals.
* In a unique moment in Olympic history, the 12-foot dinghy event in sailing was held in two different countries. The final two races in the event were held in the , as the only two competitors in the event were Dutch. [http://www.olympic.org/uk/games/past/index_uk.asp?OLGT=1&OLGY=1920]