Nordic combined
Not to be confused with Alpine combined, in which athletes compete in downhill and slalom ski racing.

The Nordic combined is a winter sport in which athletes compete in both cross-country skiing and ski jumping.

While Norwegian soldiers are known to have been competing in Nordic skiing since the 19th century, the first major competition in Nordic combined was held in 1892 in Oslo at the first Holmenkollen Ski Festival, an event still held annually. In Norway, popularity of the Holmenkollen, and Nordic combined in general, was great. It is still held in all Winter Olympics. There is currently no women's competition sanctioned by the International Ski Federation.

The sport was included at the 1924 Winter Olympics, and has been on the programme ever since. World Championships have been held since 1925. 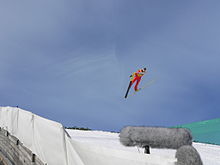 Hannu Manninen, the most successful athlete in the Nordic Combined World Cup.

There are currently four kinds of Nordic combined events, of which three - the individual, sprint and team - are World Championship events. A fourth, the mass start, was introduced at the 2009 championships at Liberec, Czech Republic. At the fall 2008 FIS meeting in Zurich, Switzerland, the individual and sprint events will be replaced by compact version of the events. These events will also occur at the 2009 world championships in Liberec.

Current events included in the Olympics are the mens individual NH/10km and the mens team 4x5. km

The most common is the individual race, also known as the Individual Gundersen. Prior to 2008, this event encompassed two jumps from the ski jumping normal hill, and 15 km cross country skiing. Points are scored in ski jumping for distance and style. The distance points being 2 points per meter (1.2 for hills with a K-point of 100 m or farther), and the style points range between 3 and 30 per jump. In the cross-country race, a 15-point lead in the ski jump equals a one-minute head start. The racers with most ski jumping points will start first, followed by the next best jumper after as much time as there was difference in their jumping scores. This means that the first skier to cross the finish line is the winner of the event. This method of competition, also known as the Gundersen method, was introduced in the mid 1980s. Before, athletes would start the final race in intervals, and the gold medal would be decided on points. For the 2009 championships, this event changed to a single jump from the normal hill followed by a 10 km cross country race using the Gundersen system. This also applies to the large hill ski jump event, formerly the sprint. At a 28 May 2009 meeting in Dubrovnik, Croatia, it was stated that the 2008 format of one ski jump hill followed by the 10 km cross country skiing event passed the test, resulting in a doubling of television coverage from the previous season.

In the mass start event, the cross country race is held first. The winner of that event receives 120 points, the others get 15 points subtracted for each minute behind the leader. In the ski jump, no style points are awarded, although jumpers receive fewer points for falling or failing to make a Telemark landing. The winner of this event is determined on a points-based system. This event made its debut at the FIS Nordic World Ski Championships 2009 in Liberec.

The team event consists of four skiers starting from the ski jump with one jump each, then moving onward to cross-country skiing in a 4 x 5 km relay. The Gundersen point total for this as of 2008 has been 1 point equals 1.33 seconds or 45 points per minute. It is a pursuit start similar to the individual events. When the event debuted in the 1980s, the event was a 3 x 10 km team event, but that changed following Japan's successes at the FIS Nordic World Ski Championships 1993 in Falun and the 1994 Winter Olympics in Lillehammer where the country won by almost four minutes and almost five minutes respectively. The event became a 4 x 5 km team at the FIS Nordic World Ski Championships 1995 in Thunder Bay, Ontario where it has remained ever since.

The sprint event is basically the same, but only one jump is performed on the large hill, and the cross-country distance is 7.5 km. For the 2009 championships, this event changed to a single jump from the large hill followed by a 10 km cross country race using the Gundersen system.

Recently, a newer form called "Hurricane sprint" has been introduced, which is similar to the sprint using the Gundersen method, but based on extra distance instead of extra time. The distance is still 7.5 km, but only the best contestant from the ski jumping will run that distance and all others start a given distance behind, based on their scores from the ski jumping. As the estimated official speed of a cross-country skier is 6 m/s, this means that the contestants start 24 m behind the leader for every point they are behind (to match roughly with the time penalties from the Gundersen method). This form is on the program for the 2007–08 FIS Nordic Combined World Cup.

Bindings
The binding must be mounted parallel to the run-direction. The binding must be placed in such a way that a maximum 57% of the entire ski length is used as the front part.
Boots
High-backed, flexible yet firm boots with a low cut at the front. They are designed to allow the skier to lean forward during flight.
Connection cord
Part of the binding; a cord that attaches the ski to the boot and prevents the wobbling of skis during flight.
Ski jumping suit
All portions of the ski jumping suit must be made of the same material and must show a certain air permeability. The size of the suit must conform to the body shape in an upright position with certain tolerances.
Jumping skis
Jumping skis are manufactured especially for use on ski jumping hills. Skis with a length of a maximum 146% of the total body height of the competitor may be used. The curvature and shape of the skis is restricted by certain geometric features.

Bindings
Bindings secure only the toe of the boot to the ski.
Boots
The skating shoe is fixed to the ski with a binding, holding the toe firm. The rear of the boot is built up to shore up the ankle, which is constantly under pressure in skating technique.
Poles
Long and straight, often reaching up as high as a competitor's chin, with a specially shaped basket designed to allow skiers to push hard and evacuate snow.
Skis
Narrower and lighter than those used in Alpine skiing. They have long, curved ends and rise up slightly in the middle. They can be up to 2 meters long.
Suit
Uses stretch fabric hugging the body, similar to a runner’s training clothing.
Wax
Glide wax is crucial, and determined by snow and weather conditions.