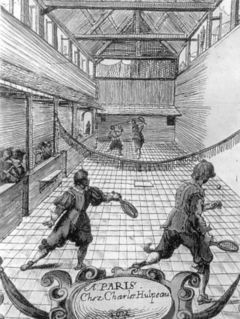 Jeu de paume (English: "palm game") is a ball-and-court game that originated in France. It was an indoor precursor of tennis played without racquets, though these were eventually introduced. It is a former Olympic sport, and has the oldest ongoing annual world championship in sport, first established over 250 years ago. Originally spelled jeu de paulme, it is sometimes called courte paume or "real tennis". 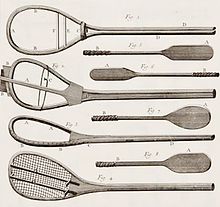 In the earliest versions of the game, the players hit the ball with their hands, as in palla, volleyball, or certain varieties of pelota. Jeu de paume, or jeu de paulme as it was formerly spelled,[1] literally means "palm game". In time, gloves replaced bare hands. Even when paddle-like bats, and finally racquets, became standard equipment for the game by the late 1600s, the name did not change. It became known as "tennis" in English (see History of tennis), and later "real tennis" after the derived game of lawn tennis became the more widely known sport.

The term is used in France today to denote the game of tennis on a court in which the ancient or modern game might be played. The indoor version is sometimes called jeu de courte paume or just courte paume ("short palm") to distinguish it from the outdoor version, longue paume ("long palm"), played on a field of variable length.

Since 1740, jeu de paume has been the subject of an amateur world championship, held each year in September. It is the oldest active trophy in international sport.

Various other forms of handball may be related to one degree or another; this is generally difficult to ascertain with certainty, and some, like the Mesoamerican ballgame are clearly unrelated.

Various other racquet games (squash, badminton, etc. may be related to one degree or another.

A modernised court in the Palace of Fontainebleau, Paris (1991).

The Galerie nationale du Jeu de Paume, a museum of contemporary art, is housed in a former court on the north side of the Tuileries park in the centre of Paris.

The painter Jacques-Louis David's famous sketch, le Serment du jeu de paume ('the Tennis Court Oath') now hangs in the court of the Palace of Versailles. It depicts a seminal moment of the French Revolution, when, on 20 June 1789, deputies of the Estates-General met at the court and vowed that they would not disband before the proclamation of a formal Constitution for France.