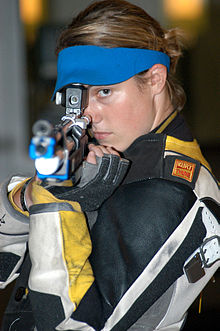 A shooting sport is a competitive sport involving tests of proficiency (accuracy and speed) using various types of guns such as firearms and airguns (see archery for more information on shooting sports that make use of bows and arrows). Hunting is also a shooting sport, and indeed shooting live pigeons was an Olympic event (albeit only once, in 1900). The shooting sports are categorized by the type of firearm or target used.

The National Rifle Association (NRA) of the United Kingdom was founded in 1860 to raise the funds for an annual national rifle meeting "for the encouragement of Volunteer Rifle Corps, and the promotion of Rifle-shooting throughout Great Britain".

For similar reasons, concerned over poor marksmanship during the American Civil War, veteran Union officers Col. William C. Church and Gen. George Wingate formed the National Rifle Association of America in 1871 for the purpose of promoting and encouraging rifle shooting on a "scientific" basis. In 1872, with financial help from New York state, a site on Long Island, the Creed Farm, was purchased for the purpose of building a rifle range. Named Creedmoor, the range opened in 1872, and became the site of the first National Matches until New York politics forced the NRA to move the matches to Sea Girt, New Jersey. The popularity of the National Matches soon forced the event to be moved to its present, much larger location: Camp Perry. In 1903, the U.S. Congress created the National Board for the Promotion of Rifle Practice (NBPRP), an advisory board to the Secretary of the Army, with a nearly identical charter to the NRA. The NBPRP (now known as the Civilian Marksmanship Program) also participates in the National Matches at Camp Perry. 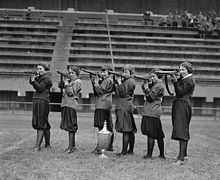 In 1903, the NRA began to establish rifle clubs at all major colleges, universities and military academies. By 1906, youth programs were in full swing with more than 200 boys competing in the National Matches. Today, more than one million youth participate in shooting sports events and affiliated programs through groups such as 4-H, the Boy Scouts of America, the American Legion, U.S. Jaycees, NCAA, the Scholastic Clay Target Program, National Guard Bureau, ROTC and JROTC. These programs have all continued to thrive despite political pressures to disband. The success of these programs is often attributed to an emphasis on safety and education that has resulted in an unprecedented scholastic and collegiate athletic safety record.

French pistol champion and founder of the modern Olympics, Pierre de Coubertin, participated in many of these early competitions. This fact certainly contributed to the inclusion of five shooting events in the 1896 Olympics. Over the years, the events have been changed a number of times in order to keep up with technology and social standards. For example, targets that formerly resembled humans or animals in their shape and size have are now a circular shape in order to avoid associating the sport with any form of violence. At the same time, some events have been dropped and new ones have been added. The 2004 Olympics featured three shooting disciplines (rifle, pistol and shotgun) where athletes competed for 51 medals in 10 men's and 7 women's events—slightly fewer than the previous Olympic schedule.

The Olympic Games continue to provide the shooting sports with its greatest public relations opportunity. The sport has always enjoyed the distinction of awarding the first medals of the Games. Internationally, the International Shooting Sport Federation (ISSF) has oversight of all Olympic shooting events worldwide, while National Governing Bodies (NGBs) administer the sport within each country.

Having originally established shooting as an organized sport in the USA, the NRA was the obvious choice to administer the United States participation in the Olympic games. The NRA dutifully managed and financially supported international and conventional shooting sports (i.e., National Matches) for over 100 years until the formation of USA Shooting.

Because of its long heritage and broad appeal, the shooting sports are enjoyed by a large number of participants around the world. In recent years, however, the shooting sports have become increasingly threatened by social and political reforms. In some countries, voters have declared their disapproval toward the private ownership and possession of handguns. This is generally motivated by the perception that handguns are associated with violent crime instead of sportsmanship. Some governments, such as the British, have enacted restrictive gun control legislation that directly affects the shooting sports.

More recently, a rise in the number of concealed carry permit-holders[1] in the US has led to a surge in interest in various handgun competitions that foster defensive skills, accuracy drills, and personal protection tactics. 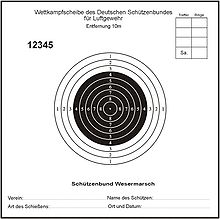 A Rifle is a firearm or airgun with a rifled barrel, but commonly refers to long weapons that usually require two hands to hold and fire steadily. They generally have a longer range and greater accuracy than pistols, and are popular for hunting.

Handguns, or Pistols, are smaller than rifles, and are much more convenient to carry in general. They usually have a shorter range and lesser accuracy compared to rifles.

A Shotgun is similar to a rifle, but typically fires projectiles that either contain many smaller sub-projectiles, or one large projectile. They are more often than not pump-action or single-shot-and-reload actions.

Action Shooting is a generic term applicable to non-traditional shooting sports, generally characterized by rapid movement within each shooting stage, where most or all begins with holster draw in the case of handguns. Examples include 'practical pistol' as in the International Practical Shooting Confederation (IPSC), the United States Practical Shooting Association (USPSA) and the International Defensive Pistol Association (IDPA), as well as cowboy action shooting, ActionAirgun (AAG), and 'three-gun' events noted below. The latter two involve use of rifles, handguns, and shotguns within the same event.

3-Gun shooting events (not to be confused with NRA 3-gun "Conventional Pistol" events fired with a rimfire, centerfire and .45 caliber pistol) are practical shooting events where the stages are shot with a combination of a rifle, handgun, and/or shotgun. Matches generally involve courses where the shooter must move through different stages, and engage targets in a variety of different position. Each stage will generally require the use of different weapons and require the shooter to transition between different firearms. Force multipliers are generally awarded to the score based on the caliber of the ammunition the shooter uses. Although 3-gun competitions take place in most local areas, the largest annual events in the USA are the USPSA 3-Gun Nationals, the MGM Ironman 3 gun, the Rocky Mountain 3-Gun, the DPMS Tri-Gun Challenge, and the Superstition Mountain Mystery 3-Gun. 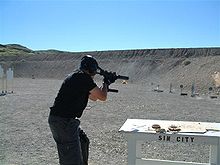 A Submachine Gun (SMG) is a weapon that has a mix of rifle and handgun properties. They share the smaller cartridge of the pistol, but are fully automatic and generally have longer barrels compared to the latter.

Submachine Gun competition have been around for over 20 years and are growing in popularity every year.[citation needed] 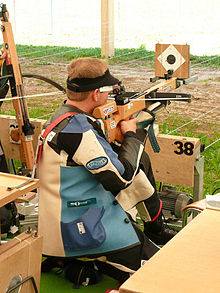 Athletes shoot from two positions; "Standing" and "Kneeling". Crossbows are loaded using a lever and the Bolt (arrow) is shot at a black and white target card (one shot per card, the same bolt shot repeatedly).

At IAU World and Continental championships national federations can enter teams of three (3) competitors (of either gender) in two Categories; Open Class and U-21 Juniors. And by taking part at IAU Cup matches, a nation can win two (2) additional Quota-Spots thereby increasing to five (5) the number of competitors that the federation concerned can register for the next years World or Continental Match-crossbow championships.

The competition programme consists of 60 shots from 30 meters - 30 shots "Standing" plus 30 shots "Kneeling". The Team competitions (60 shots) take place on the first day of championships. On the following day, the highest scoring competitors in the team events (Open Class and U-21 Juniors) will qualify to take part in the Individual championships. The numbers of competitors to qualify will depend on the number of targets available (usually 28). After 60 shots the top eight (8) competitors in each category will go forward to the Championships Finals (Standing position, 10 shots on voice command). The winners of the Gold, Silver and Bronze Medals are the three competitors with the highest combined scores (60 shot Qualification plus 10 shot Final). If scores are tied after 10 Final shots the competitors concerned continue shot-by-shot until a winner is declared. 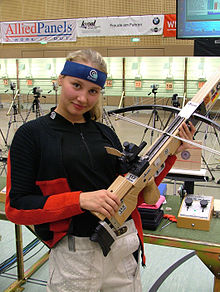 10 metre Match-crossbow shooting, which was introduced into the IAU’s programme in 1977, has attracted many new nations to the sport. It’s a highly technical event that’s appreciated by top-flight air rifle athletes and match-crossbow specialists alike. Shooting takes place on indoor ranges equipped with electrically driven Match-crossbow target transport systems. Existing 10 meter airgun ranges can often be adapted, but in the absence of permanent facilities, a temporary shooting range can be set up in large Sports Hall using portable equipment.

Competitors shoot from the Standing position - as in ISSF Air Rifle shooting. Crossbows are loaded using a lever; the Bolt (arrow) is shot at a black and white target card - one shot per card, the same bolt shot repeatedly. The size of the target is the same as the Olympic air-rifle target; 0,5mm diameter 10-ring.

The 10 meter competition programme is run in separate relays for each category; Men shoot 60 bolts, Women and U-21 Juniors each shoot 40 bolts. Team (3 shooters per team) and Individual competitions are run concurrently. The Team results are decide after 60 and 40 bolts respectively. In the Individual events the eight (8) top scoring competitors in each category qualify for Olympic-style 10-shot finals to decide the medal winners.