Gun
This article is about the projectile weapon. For other uses, see Gun (disambiguation). 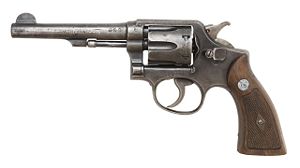 A gun is a muzzle or breech-loaded projectile-firing weapon. There are various definitions depending on the nation and branch of service. A "gun" may be distinguished from other firearms in being a crew-served weapon such as a howitzer or mortar, as opposed to a small arm like a rifle or pistol, but there are exceptions, such as the U.S. Air Force's GUU5/P. At one time, land-based artillery tubes were called cannon and sea-based naval cannon were called guns. The term "gun" evolved into a generic term for any tube-launched projectile-firing weapon used by sailors, including boarding parties and marines.

In modern parlance, a gun is a projectile weapon using a hollow, tubular barrel with a closed end—the breech—as the means of directing the projectile (as well as other purposes, for example stabilizing the projectile's trajectory, aiming, as an expansion chamber for propellant, etc.), and firing in a generally flat trajectory.

The term "gun" has also taken on a more generic meaning, by which it has come to refer to any one of a number of trigger-initiated, hand-held, and hand-directed implements, especially with an extending bore, which thereby resemble the class of weapon in either form or concept. Examples of this usage include staple gun, nail gun, glue gun, grease gun. Occasionally, this tendency is ironically reversed, such as the case of the American M3 submachine gun which carries the nickname "Grease Gun".

Most guns are described by the type of barrel used, the means of firing, the purpose of the weapon, the caliber, or the commonly accepted name for a particular variation.

Barrel types include rifled—a series of spiraled grooves or angles within the barrel—when the projectile requires an induced spin to stabilize it and smoothbore when the projectile is stabilized by other means or rifling is undesired or unnecessary. Typically, interior barrel diameter and the associated projectile size is a means to identify gun variations. Barrel diameter is reported in several ways. The more conventional measure is reporting the interior diameter of the barrel in decimal fractions of the inch or in millimeters. Some guns—such as shotguns—report the weapon's gauge or—as in some British ordnance—the weight of the weapon's usual projectile. 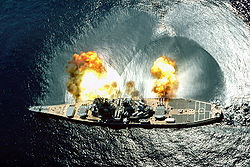 The use of the term "cannon" is interchangeable with "gun" as words borrowed from the French language during the early 15th century, from Old French canon, itself a borrowing from the Italian cannone, a "large tube" augmentative of Latin canna "reed or cane".[1] Recent scholarship indicates that the term "gun" may also have its origins in the Norse woman's name "Gunnildr", which was often shortened to "Gunna".[2] The earliest recorded use of the term "gonne" was in a Latin document circa 1339. Other names for guns during this era were "schioppi" (Italian translation-"thunderers"), and "donrebusse" (Dutch translation-"thunder gun") which was incorporated into the English language as "blunderbuss".[3] Artillerymen were often referred to as "gonners" and "artillers".[4] Early guns and the men who used them were often associated with the devil and the gunner's craft was considered a black art, a point reinforced by the smell of sulfur on battlefields created from the firing of guns along with the muzzle blast and accompanying flash.[5]

In military use, the term "gun" refers primarily to direct fire weapons that capitalize on their velocity for penetration or range. In modern parlance, these weapons are breech-loaded and built primarily for long range fire with a low or almost flat ballistic arc. A variation is the howitzer or gun-howitzer designed to offer the ability to fire both low or high-angle ballistic arcs. In this use, example guns include naval guns. A less strict application of the word is to identify one artillery weapon system or non-machine gun projectile armament on aircraft.

The word cannon is retained in some cases for the actual gun tube but not the weapon system. The title gunner is applied to the member of the team charged with operating, aiming, and firing a gun.

Autocannon are automatic guns designed primarily to fire shells and are mounted on a vehicle or other mount. Machine guns are similar, but usually designed to fire simple projectiles. In some calibers and some usages, these two definitions overlap.

A related military use of the word is in describing gun-type fission weapon. In this instance, the "gun" is part of a nuclear weapon and contains an explosively propelled sub-critical slug of fissile material within a barrel to be fired into a second sub-critical mass in order to initiate the fission reaction. Potentially confused with this usage are small nuclear devices capable of being fired by artillery or recoilless rifle.

In civilian use, a related item used in agriculture is a captive bolt gun. Such captive piston guns are often used to humanely stun farm animals for slaughter.[6]

Shotguns are normally civilian weapons used primarily for hunting. These weapons are typically smooth bored and fire a shell containing small lead or steel balls. Variations use rifled barrels or fire other projectiles including solid lead slugs, a Taser XREP projectile capable of stunning a target, or other payloads. In military versions, these weapons are often used to burst door hinges or locks in addition to antipersonnel uses.

Main article: History of the firearm 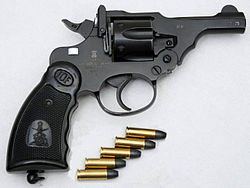 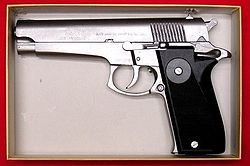 Guns for training and entertainment

Generally, guns use compressed gas confined by the barrel to propel the bullet up to high speed, though devices operating in other ways are sometimes called guns. In guns that are firearms the high pressure gas is generated by combustion, usually of gun powder. This principle is similar to that of internal combustion engines, except that the bullet leaves the barrel, but the piston transfers its motion to other parts and returns down the cylinder. As in an internal combustion engine, the combustion propagates by deflagration rather than by detonation, and good gunpowder, like good motor fuel, is resistant to detonation. This is because much of the energy generated in detonation is in the form of a shock wave, which can propagate from the gas to the solid structure and heat or damage the structure, rather than staying as heat to propel the piston or bullet. The speed of a shock wave at such high temperature and pressure is much faster than that of any bullet.