Salzburg
This article is about the capital of the Austrian state of Salzburg. For other uses, see Salzburg (disambiguation).
Not to be confused with Sulzburg.

Salzburg (help·info) (Austro-Bavarian: Såizburg; literally: "Salt Castle") is the fourth-largest city in Austria and the capital city of the federal state of Salzburg.

Salzburg's "Old Town" (Altstadt) has internationally renowned baroque architecture and one of the best-preserved city centres north of the Alps. It was listed as a UNESCO World Heritage Site in 1997. The city is noted for its Alpine setting.

Salzburg was the birthplace of 18th-century composer Wolfgang Amadeus Mozart. In the mid-20th century, the city was the setting for parts of the American musical and film The Sound of Music.

The capital city of the State of Salzburg (Land Salzburg), the city has three universities. It has a large population of students who add liveliness and energy to the area, and the universities provide culture to the community.

Salzburg is on the banks of the Salzach River, at the northern boundary of the Alps. The mountains to Salzburg's south contrast with the rolling plains to the north. The closest alpine peak—the 1972 m Untersberg—is only a few kilometres from the city centre. The Altstadt, or "old town", is dominated by its baroque towers and churches and the massive Festung Hohensalzburg. This area is surrounded by two smaller mountains, the Mönchsberg and Kapuzinerberg, which act as the green lungs of the city. Salzburg is approximately 150 km east of Munich, 281 km northwest of Ljubljana, and 300 km west of Vienna.

The climate of Salzburg is cool and humid (Köppen Cfb).

In 1935, the population significantly increased when Salzburg absorbed adjacent municipalities. After World War II, numerous refugees found a new home in the city. New residential space was created for American soldiers of the postwar Occupation, and could be used for refugees when they left. In around 1950 Salzburg passed the mark of 100,000 citizens, and in 2006 it reached the mark of 150,000 citizens. In the agglomeration, about 210,000 are residing as of 2007.[citation needed]

Traces of human settlements have been found in the area dating to the Neolithic Age. The first settlements at Salzburg were apparently begun by the Celts around the 5th century BC.

Around 15 BC the separate settlements were merged into one city by the Roman Empire. At this time the city was called Juvavum and was awarded the status of a Roman municipium in 45 AD. Juvavum developed into an important town of the Roman province of Noricum. After the collapse of the Norican frontier, Juvavum declined so sharply that by the late 7th century it had become a "near ruin".

The Life of Saint Rupert credits the 8th-century saint with the city's rebirth. When Theodo of Bavaria asked Rupert to become bishop c. 700, Rupert reconnoitered the river for the site of his basilica. Rupert chose Juvavum, ordained priests, and annexed the manor Piding. Rupert named the city "Salzburg". He traveled to evangelise among pagans.

The name Salzburg means "Salt Castle". It derives its name from the barges' carrying salt on the Salzach River, which were subject to a toll in the 8th century, as was customary for many communities and cities on European rivers.

The Festung Hohensalzburg, the city's fortress, was built in 1077 and expanded during the following centuries.

Independence from Bavaria was secured in the late 14th century. Salzburg was the seat of the Archbishopric of Salzburg, a prince-bishopric of the Holy Roman Empire.

On 31 October 1731, the 214th anniversary of Martin Luther's nailing of his 95 Theses to the Wittenberg School door, Roman Catholic Archbishop Count Leopold Anton von Firmian signed an Edict of Expulsion, the Emigrationspatent, directing all Protestants to recant their non-Catholic beliefs or be banished from the city. (This is not to be confused with many similar edicts of expulsion issued against the Jews in various cities in Europe.)

Landowners were given two days to sell their lands and leave. Cattle, sheep, furniture and land all had to be dumped on the market, and the Salzburgers received little money from the well-to-do Catholic allies of Von Firmian. Von Firmian confiscated much of their land for his own family, and ordered all Protestant books and Bibles burned. Many children aged 12 and under were seized to be raised as Roman Catholics. But those who owned land benefited from one key advantage: the three-month deadline delayed their departure until after the worst of winter.

Tenant farmers, tradesmen, labourers and miners were given only eight days to sell what they could and leave. The first refugees marched north in desperately cold temperatures and snow storms, seeking shelter in the few cities of Germany controlled by Protestant princes. Their children walked or rode on wooden wagons loaded with baggage. As they travelled, the exiles' savings were quickly drained. They were set upon by highwaymen, who seized taxes, tolls and payment for protection by soldiers from robbers.

The story of their plight spread quickly as their columns marched north. Goethe wrote the poem "Hermann and Dorothea", which,though depicting disruptions caused in the aftermath of the French Revolution, was prompted by the story of the Salzburg exiles' march. Protestants and some Catholics were horrified at the cruelty of their expulsion in winter, and the courage they had shown by not renouncing their faith. Slowly at first, the refugees arrived at towns that welcomed them and offered them aid. But there was no place where so many refugees could settle. 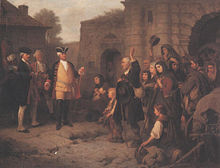 Frederick William I welcomes the Salzburg Protestants in Berlin

Finally, in 1732 King Frederick William I of Prussia accepted 12,000 Salzburger Protestant emigrants, who settled in areas of East Prussia that had been devastated by the plague twenty years before.[3] Other smaller groups made their way to Debrecen and the Banat regions of the Kingdom of Hungary, to what is now Hungary and Serbia; the Kingdom of Hungary recruited Germans to repopulate areas along the Danube River decimated by the plague and the Ottoman invasion. The Salzburgers also migrated to Protestant areas near Berlin and Hanover in Germany; and to the Netherlands.

On 12 March 1734, a small group of about sixty exiles from Salzburg, who had travelled to London first, arrived in the British North American colony of Georgia seeking religious freedom. Later in that year, they were joined by a second group, and, by 1741, a total of approximately 150 of the Salzburg exiles had founded the town of Ebenezer on the Savannah River (see John A. Treutlen).

The Protestant Salzburgers in Prussian Lithuania kept a distinct ethnic German identity over the following centuries, keeping their language in churches and schools. Their descendants were expelled after World War II.

The ethnic German refugees went to western Europe, the United States and other western nations. Those who settled in West Germany founded a community association to preserve their historic identity as Salzburgers.[4]

In 1772-1803, under archbishop Hieronymus Graf von Colloredo, Salzburg was a centre of late Illuminism.

The Electorate of Salzburg

In 1803, the archbishopric was secularised by Emperor Napoleon and handed over to Ferdinand III of Tuscany, former Grand Duke of Tuscany, as the Electorate of Salzburg.

In 1805, Salzburg was annexed to the Austrian Empire together with Berchtesgaden.

In 1809, the territory of Salzburg was transferred to the Kingdom of Bavaria after Austria's defeat at Wagram.

The division of Salzburg and the annexation by Austria and Bavaria

At the Congress of Vienna in 1815, it was definitively returned to Austria, but without Rupertigau and Berchtesgaden, which passed to Bavaria. Salzburg was integrated into the Salzach province and Salzburgerland was ruled from Linz.[5] In 1850, Salzburg's status was once more restored as the capital of the Duchy of Salzburg, a crownland of the Austrian Empire. The city became part of Austria-Hungary in 1866 as the capital of a crownland into the Austrian Empire.

Salzburg, which was a capital of an Austro-Hungarian territory, became part of German Austria in 1918 and the First Austrian Republic in 1919, after the Treaty of Versailles.

During the Anschluss, Austria, with Salzburg being a part of it, was annexed to the German Third Reich on 12 March 1938, one day before a scheduled referendum about Austria's independence. German troops were moved to the city. Political opponents, Jewish citizens and other minorities were subsequently arrested and deported. The synagogue was destroyed and several POW camps for prisoners from the Soviet Union and other nations were organized in the area.

Young Austrians at celebrations just after the Anschluss

During World War II, the KZ Salzburg-Maxglan concentration camp was located here. It was a Roma camp and provided slave labour to local industry.

Allied bombing destroyed 7,600 houses and killed 550 inhabitants. A total of 15 strikes destroyed 46 percent of the city's buildings especially around Salzburg train station. Although the town's bridges and the dome of the cathedral were demolished, much of its Baroque architecture remained intact. As a result, it is one of the few remaining examples of a town of its style. American troops entered Salzburg on 5 May 1945.

In the city of Salzburg there were several DP Camps following World War II. Among these were Riedenburg, Camp Herzl (Franz-Josefs-Kaserne), Camp Mülln, Bet Bialik, Bet Trumpeldor, and New Palestine. Salzburg was the centre of the American-occupied area in Austria.

An aerial view of Salzburg 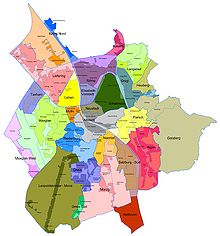 After World War II Salzburg became the capital city of the State of Salzburg (Land Salzburg).

On 27 January 2006, the 250th anniversary of the birth of Wolfgang Mozart, all 35 churches of Salzburg rang their bells a little after 8:00 p.m. (local time) to celebrate the occasion. Major celebrations took place throughout the year. 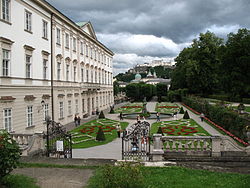 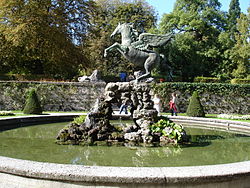 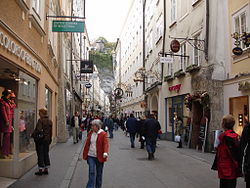 View of shoppers on Getreidegasse, which is one of the oldest streets in Salzburg

Salzburg is a tourist favourite, with the number of tourists outnumbering locals by a large margin in peak times. In addition to Mozart's birthplace noted above, other notable places include:

Outside the Inner Old Town

Within the greater Salzburg area 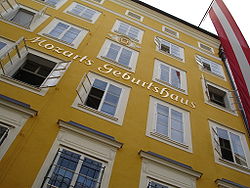 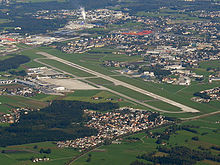 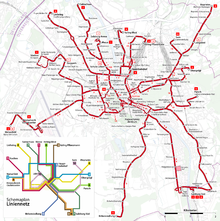 Map of the Salzburg trolleybus system.

The city is serviced by comprehensive rail connections, with frequent east-west trains servicing Vienna, Munich, Innsbruck, and Zürich, including daily high-speed ICE services. The city acts as a hub for south-bound trains through the Alps into Italy.

Salzburg Airport has scheduled flights to European cities such as Frankfurt, Vienna, London, Rotterdam, Amsterdam, Brussels, Düsseldorf and Zürich, as well as Hamburg and Dublin. In addition to these, there are numerous charter flights.

In the main city there is the Salzburg trolleybus system and bus system with a total of more than 20 lines, and service every 10 minutes. Salzburg has an S-Bahn system with four Lines (S1, S2, S3, S11), trains depart from the main station every 30 minutes, and they are in the ÖBB net. Suburb line number S1 reaches the world famous Silent Night chapel in Oberndorf in about 25 minutes.

In the 1960s, the movie The Sound of Music was filmed in Salzburg and the state of Salzburg. The movie was based on the true story of Maria von Trapp, a Salzburg-based nun who took up with an aristocratic family and fled the German Anschluss. Although the film is not particularly popular among Austrians, the town draws many visitors who wish to visit the filming locations, alone or on tours.

Salzburg is the setting for the Austrian crime series Stockinger.

In the 2010 film Knight & Day, Salzburg serves as the backdrop for a large portion of the film.

Austrian German is widely written. Austro-Bavarian is the German dialect of this territory and widely spoken.

The former SV Austria Salzburg reached the UEFA Cup final in 1994. On 6 April 2005 Red Bull bought the club and changed the name into FC Red Bull Salzburg. The club's future plans are to be among the 10 best European football clubs. The home stadium of Red Bull Salzburg is the Wals Siezenheim Stadium in a suburb in the agglomeration of Salzburg and was one of the venues for the 2008 European Football Championship.

Salzburg was a candidate city for the 2010 & 2014 Winter Olympics, but lost to Vancouver and Sochi respectively.

Salzburg panorama as seen from the Hohensalzburg Castle