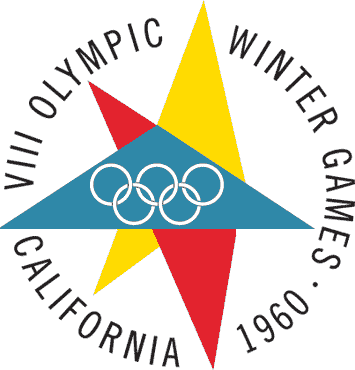 Size = 150
Optional caption = The emblem is made up of three red,
white, and yellow triangles, which represent a
star or snowflake, and the Olympic rings.
Host city = Squaw Valley, ,

Nations participating = 30
Athletes participating = 665
(521 men, 144 women)
Events = 27 in four s
Opening ceremony = ,
Closing ceremony = ,
Officially opened by = Vice President
Athlete's Oath =
Judge's Oath =
Olympic Torch =
Stadium =
The 1960 , officially known as the VIII Olympic Winter Games, were a winter which was celebrated between and , in Squaw Valley, , (located near the basin). Squaw Valley won the bid in 1955. It was the first return of the Olympic Games to North America in 28 years.

, the creator of the was initially inspired to submit Squaw Valley when he noticed a newspaper article mentioning and had expressed interest in the Games. Squaw Valley was a town with no mayor, and claimed one ski resort with only one chairlift, two rope tows, and a fifty-room lodge. In fact, Cushing was the only inhabitant and homeowner in the whole area.

The Games were awarded in , , at the 50th in , , to "shock and disbelief" over Innsbruck, and a four and a half year rush to construct s, s, s, and s, as well as the ice arena, the track, s, and began. Criticism of the high altitude, remote location, and lack of facilities were shown to be only partly justified when the contests were over.